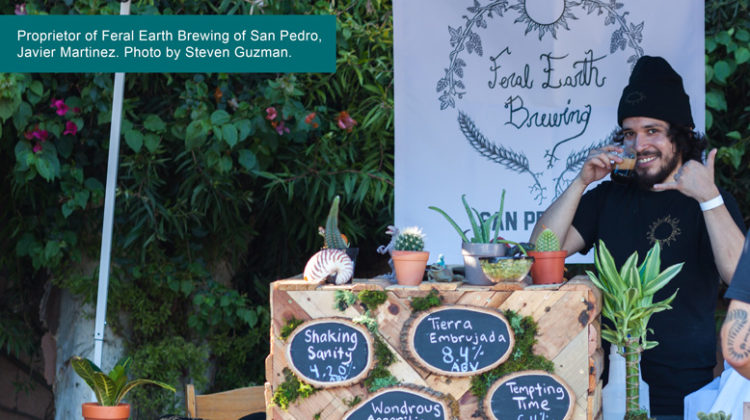 It finally  felt like summer in Los Angeles, which made it the perfect time to showcase local breweries in the outdoor Robert Gumbiner Sculpture Garden at the Museum of Latin American Art’s Beer Festival, July 13.

It was all things beer under the warm July sun, from the actual beverage to food, art, even skin-care products. Walking through the garden and into the rear parking lot, beer lovers could experience all varieties of brews provided by the SoCal Cerveceros, a Latino homebrew club. The thirst-quenching menu was curated by Brewjeria Company, a tight knit group of brewers from South LA and the San Gabriel Valley. They came from humble beginnings in 2010 —first a home brewing with a beer kit, then a one-barrel system. Sharing their craft, ideas and challenging their inhibitions with close friends was the root of their motivation to move forward with a brewery and taproom.

Other offerings included a 5-ounce complimentary MoLAA glass for sipping and Latin foods from Dos Tierras Tacos [serving great vegan and meat tacos], One Bite and Chicano Soul Food. Rounding out the event were DJ Bien Buena and later, live music by South Central based Earth Arrow, an Afro Indigenous hip hop and dance band — I’d even posit rock, too, with their well-rounded sounds.

It seemed wise to put something in my stomach before sampling the featured beverage. I chose a pumpkin, corn and lentil vegan taco topped with a dab of a hot, mildly sweet sauce from Dos Tierras — big flavor and excellent.

I was ready for beer. Not being a beer expert, or even a fan, I had hesitated to even attend MoLAA’s beer festival. But in talking to some of the brewers, I discovered what aficionados may already know — the brewmeisters are a great lot of people. Each home brewer I spoke to was down to earth and shared pride in their product. It seems only logical that they would testify to the quality of their labor at a beer fest. But I detected a sincerity and warm friendliness from all of them, a desire to talk beer — and anything else.

Among the beverages I sampled was an horchata-flavored beer from Border X Brewing, an outfit  based in San Diego that just opened a brewery in Bell.  Their booth boasted ‘Real Mexican Beer.”  I had to ask, “What’s real Mexican beer?” Roberto Ramirez, the head manager, explained that from the top down–including himself, the owner, the head brewer, are all Mexican American. The horchata blend offered an enticing first sip, infused with cinnamon and vanilla. It was soft and refreshing.

Next, I visited Indie Brewing Company’s stand where I chatted with John Miramontes. The brewery is located in Boyle Heights and specializes in double-dry hops or double IPA’s. Indie Brewing Company is about community, said Miramontes, who volunteers at the brewery. The brewery often invites local artists to its events,  providing them with exposure and a place to sell their work.

Pacing myself, I moved on to Warcloud Brewing which says, “We keep brewing for the Drunks, Poets and Philosophers.”

Speaking to Justin “Alero” Collins, I asked about the origin of their name, which comes from the Buffalo Soldiers, who made moonshine and all of their weapons were “single action.” Soon, someone realized they had to become modern and from there, they started making beer. Alero added that he had the opportunity to hang out with military types, Green Berets who gave him information on how to get a job done, or apply a “tactical mindset,” and he brings that mindset to his business acumen.  I tried a sampling of el Negro Presidente, so named for the second president of Mexico,Vincente Guerrero who was Afro-Mestizo. The dark brew was smooth and easy to go down with a mellow, slightly savory flavor.

The last home brewer I visited was Feral Brewing Company out of San Pedro. Their name is inspired by a description owner, Javier Martinez read of another beer describing an “oak aged wildflower beer where everything came from the earth.”

“[The name] was a nod back to that,” Martinez said, who is all about organic and local. He  hopes to gain a following based on his focus specializing in “sour, earthy funky and complex” brews and then, on to start his own brewery.

MoLAA went to specific effort to reach out to local breweries so the community could become aware of them and also to support local ale artisans. This second beer fest for the museum turned out to be a great respite from the daily grind. If they have a third, even this non beer lover would highly recommend it.