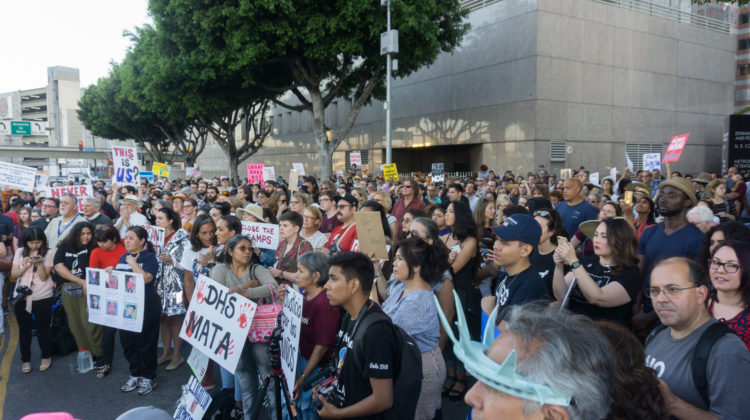 More than 700 cities throughout the United States and internationally saw demonstrations Friday, July 12 protesting deplorable conditions in detention centers in the United States holding immigrant workers and youth fighting for asylum or facing deportation. The actions, called “Lights For Liberty is A Nationwide Vigil to End Human Detention Camps.” were held at federal buildings, ICE detention centers, and othergovernment buildings. 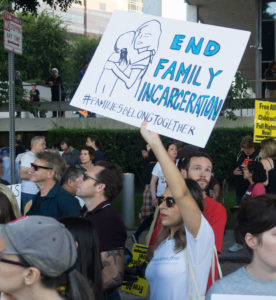 From small cities to large, including throughout California, a broad demographic of ages, nationalities and political perspectives demonstrated their clear opposition to Washington’s policies of ICE raids, overcrowding, unsanitary and inhuman conditions in the detention centers and raising xenophobia throughout the nation. Immigrant rights coalitions have been popping up nationally reflecting the
majority sentiment throughout the country: to give immigrants basic human rights Los Angeles area demonstrations included Japanese Americans, Nazi Holocaust survivors, undocumented immigrants, and every shadeof color.

If Law enforcement asks about my immigration status

Some of the most popular nationwide slogans were, Families belong together; children belong in homes, not in cages., We are all immigrants., Close the camps, no person is illegal., Melt ICE. Amnesty for immigrants It is our duty to fight for freedom It is our duty to win.Stop Caging Children. We have nothing to lose but our chains.” More than 20 vigils were staged in Los Angeles, Orange, San Bernardino and Riverside Counties.

In some sites Mylar ribbons were offered to demonstrators to show the kind of insufficient material blankets offered immigrant prisoners,  hundreds of whom are children who have been cruelly separated from their parents.

In downtown Los Angeles, over 1000 participated in the vigil in front of the Metropolitan Detention Center. There were speakers and gospel songs. Amy Cohen, child psychologist told the crowd “the United States is torturing immigrant children. This is not an exaggeration. This is not hyperbole.”

In San Fernando Valley as 300 demonstrators chanted “close the camps” wile speakers read off the names of migrant children who died in the custody. “How many people here have ancestors that came here to have a better life?” asked local civil rights attorney Lisa Bloom tocheers. The South Bay had demonstrations in Hermosa Beach, Palos Verdes, Redondo Beach, Torrance…and elsewhere Several thousand rallied in San Diego’s Larsen Park, and marched through San Ysidro to the border for another rally there.

These actions come before planned July 14 ICE raids nationwide (Trump calls it “a major operation.” targeting some 2000 people who have overstayed their visas or are in the country without documentation. The raids began on Sunday in Chicago, New York, Miami and elsewhere. According to the LA Times there are 1 million immigrants, with final removal orders. But despite Trump’s anti-immigrant rhetoric, the removal numbers during his first two years pale in comparison with those of the Obama administration; during the height of deportations in 2012, 410,000 foreigners were deported, compared with Trump’s 256,000. The raids target not only families but children who arrived at the border without adults. Both major parties carry out mass deportations, though some believe Democrats do it with a “kinder” face. 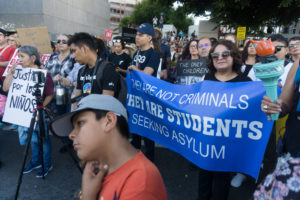 Meetings held regionally and nationally by immigration advocates have explained the rights of immigrants and offered information for immigrants who might be swept up in the raids, such as setting up family plans for taking care of children. Some families are stocking up on food and urging family members not to open their doors. Others, according to Hamid Yazdan Panah, of the California Collaborative for Immigrant Justice in San Francisco, heard people last week skip medical appointments, paid others to do grocery shopping and didn’t take the kids to school.

Local law enforcement agencies in many major metro cities nationally have publicly announced they won’t be participating in immigration sweeps including LA.

Police or ICE are at your home