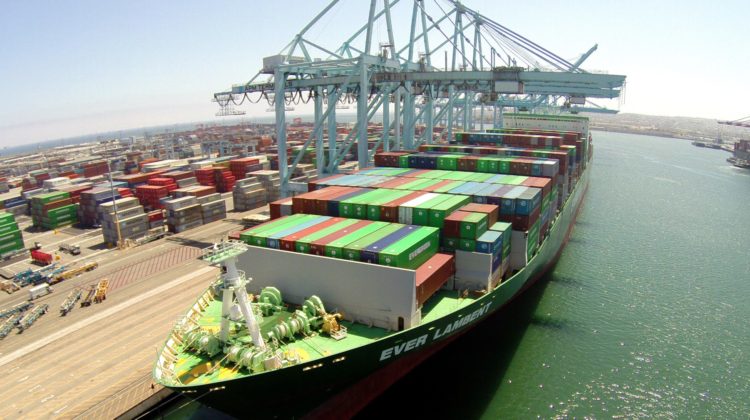 ILWU Local 13 Vice President Gary Herrera put his finger on the heart of the matter on July 11, as the Harbor Commission revisited its decision to approve APM/Maersk’s automation plans for Pier 400 after the City Council voted 12-0 to override the original approval.

“You guys have an ability today to see this project as a whole,” Herrera said. “Not as a simple minor project.”

Commissioner Diane Middleton made a similar argument, expressing the hope for a serious deliberative process at the end of the public hearing. She also invoked the framework of the Tidelands Trust Doctrine: “The Tidelands Trust gives us special responsibility, because it’s public land,” she said.

But their words fell on deaf ears. Middleton and Commissioner Anthony Pirozzi again voted to uphold the ILWU’s appeal of the original staff approval, citing the broader inevitable impacts of automation, as well as the immediate ones, while the three other commissioners took a much narrower approach, claiming there was ‘no reason’ to deny approval — though with varying degrees of hand-wringing. Commissioner Lucia Moreno-Linares even went so far as to scold the ILWU, drawing a vigorous crowd response.

The following Friday, July 19, Mayor Eric Garcetti and Councilman Joe Buscaino announced the formation of a “future of work” commission — precisely the sort of action that opponents argued needed to be done before reaching a decision on Pier 400. As a result, no one knows for certain just what the impact of the Harbor Commission’s actions will be, though the signs are not good, with more questions raised than answered by the announcement.

“I really have the utmost respect for Mr. [Gene] Seroka [POLA Executive Director] and I do for Mr. Herrera as well,” Commissioner Diane Middleton said, prior to the Commission’s vote. “But common sense tells me that if Mr. Herrera says we’re going to be the next Detroit, that Mr. Seroka says in 10 years, this port is going to see more longshoremen working than ever, they can’t both be right,” she said. “We need some numbers. We don’t have that now. And that’s why I just think we can’t vote on this.”

The risks of being wrong appear wildly disproportional, as reflected in the long list of public officials—from the presidents of local neighborhood councils, to state legislators, State Controller Betty Yee and presidential candidate Sen. Bernie Sanders—who weighed in against the approval, either opposing it outright or calling for more study before holding a final vote.

“In 55 years of sitting in political meetings, what I’ve learned is that if you look around the room and 20 people are saying one thing [and] you’re saying something else, maybe you should think about it again,” Middleton said. “Because you have to ask yourself, ‘Can all 20 of those people be wrong?’”

“What they’re all depending on is the Tidelands Trust [Doctrine],” Middleton said. “The Tidelands Trust gives us a special responsibility, because it’s public land.” She went on to quote a letter from Jim Frazier, chairman of the Assembly Transportation Committee, “‘Prior to taking action’ we should ‘conduct a comprehensive economic analysis.’ We should ‘develop a policy which takes into consideration job displacement and other impacts on the workforce when considering port investments,’” Middleton quoted. “We haven’t done that.”

She mentioned several councilmembers specifically for their remarks, including Councilman Buscaino whom she quoted, saying, “Technology must create jobs and not kill them. We cannot use public land to kill jobs.” But she highlighted the words of Councilman Mike Bonin because, “I can’t say it any better than he did,” she said: “I argue that not only is it not a matter of law that the permit be approved. I argue that as a matter of law, this permit must be disapproved. This permit is in violation of the port master plan. This permit is a violation of the trust this commission holds, the port holds, Buscaino holds, the city holds and the community holds under the Tidelands Trust.”

The Tidelands Trust is rooted in the Public Trust Doctrine, which dates back over 2,000 years to Roman law, which formed the foundation of English common law. While the principle is ancient, its application has evolved over time to deal with new challenges, such as the one posed by automation today.

“This community has had to bear the many burdens of the port over the years,” County Supervisor Janice Hahn told the commissioners, citing “smog and pollution that gives our children asthma, pollution that gives our residents lung cancer, truck traffic that jams our freeways and buckles our local roads,” as well as “a 100 years war between the community and this port just so the local residents could get more recreational and public access.” But through all that, she noted, “at least we always knew that we could rely on this port for good paying jobs. Those jobs are the reason this community has been willing to bear those burdens. These jobs are the reason this town is proud to call ourselves the port town,” Hahn said.

“Now we’re staring down a very possible future in which those jobs are replaced by automation. That is an unacceptable future. That is a betrayal of the social contract between this community and this port. Let us not forget that this port is held in trust for the people of California,” Hahn noted, pointing specifically to a section of the California Coastal Act, which states, “existing developments are carefully planned and developed consistent with the policies that are essential to the economic social well-being of the people of the state.”

Commissioner Moreno-Linares, in contrast, ignored the wider community completely, focusing only on the union. “I urge ILWU leadership to lead, L-E-A-D, and actually do the right thing for its membership by working on a plan to integrate automation. If automation is seen by ILWU as a job-killer, I suggest next time you get an agreement and you recommend to membership for approval, tell them all the facts,” she said. “This discussion today on automation and whether it goes through is not a decision of this board but rather something that your leadership negotiated long ago. It is too bad that you have not taken the time to have started to deal with it sooner.”

ILWU Local 13 President Ray Familathe was contacted, but did not provide a response before press time. There have always been differences in longshore leadership about how to deal with ongoing changes. But contracts are also negotiated against a cultural background, which can be subject to change. The magnitude of automation being implemented by Maersk clearly exceeds what’s been contemplated in the past, and has impacts on the community far beyond the negotiating parties, which is where government agencies have a role. Last year’s Dynamex decision, for example, applied a common-sense de facto test to when a worker is an employee or an independent contractor, setting an objective limit on the use of contracts to define away workers’ rights.

“This is not going to be over,” Middleton said, in her closing remarks.

“We do not give up. The working class of this country has never given up. You’re going to be back here again and again.” The next battle, she said, might be revising the port master plan “with the opportunities for input from all stakeholders. So you don’t like the way this comes out, don’t give up,” Middleton said. “You have made a lot of noise, and sooner or later those voices need to be heard.”

In the meantime, as mentioned, the announced agreement raises more questions than answers. The joint statement said, “The workforce training program will provide maintenance, repair, up-skill and re-skill training for up to 900 registered longshore workers and mechanics.”  But “up to 900” means it could be far fewer. Given projected job losses, this would seem to threaten potentially dividing the union in the future, as has happened in the past with steady men, for example. So what steps will the ILWU do to avoid or at least mitigate that threat? Calls to ILWU 13 to get more information were not returned by press time. But the questions remain. And there are sure to be many more in the days ahead.