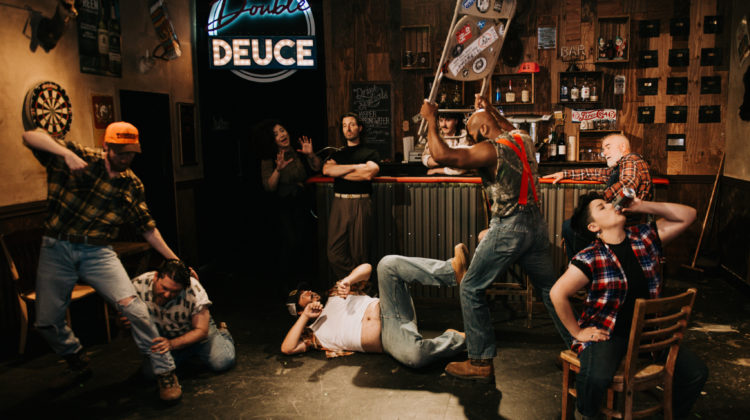 Road House, a Patrick Swayze vehicle typical of a 1980s Hollywood trend heavy on ludicrous hand-to-hand combat, groanworthy melodrama and emerging MTV stars appearing as onscreen bar bands (remember Jeff Healey?), is a study in how to make a bad film without meaning to.

So when the Garage Theatre put Love, Thunder, and Dynamite: A Roadhouse Parody on their 2019 season schedule, I was not intrigued. A few years ago they went down a similar road by adapting Wet Hot American Summer, and the nicest thing I can say is that the cast didn’t lack for energy. To my taste buds, layering silly upon silly is rarely a recipe for success.

But underlying the unquestionable triumph of Love, Thunder, and Dynamite is director Cat Elrod and company’s unexpected approach. Rather than satirize the film in the traditional sense, they play it fairly straight, rarely straying from the original dialog and staying earnest even when shining a spotlight on the absurd. The result is a first-rate genre parody for those who don’t know Road House, and something better still for those who do.

Welcome to the Double Deuce, a big bar in a Missouri small town dominated by nefarious Brad Wesley (Allen Sewell), who gets a piece of all the action ’round these parts. Things are tough at the Deuce, which leads the owner (Bill Vetro) to bring on Dalton (Luke Elder), something of a legend for his ability to bounce bars from ill repute to respectability. While cleaning house, he fires the thieving bartender that is Wesley’s nephew (Will Ardelean), which ignites a power struggle between Dalton and Wesley that will change the lives of all involved.

Before a single line is spoken, you’re already impressed. The Garage Theatre, a black-box space known for reinventing itself, has never undergone a better transformation. Outfitted with everything from working beer taps and professional, fully fabricated signage to a full-size, red-cushioned bar top, on a shoestring budget set designer Robert Young has managed to bring the Road House roadhouse to life. Forget suspension of disbelief. I’ll say it again: welcome to the Double Deuce.

As soon as the action is underway, you know Young’s work is not wasted. Elrod’s only real deviation from the film script is to add a narrator. Gary Douglas is perfect for the job, never hamming up his down home charm. In between freeze frames of the first bar fight, he effectively gets us up to speed on who’s who and what’s happening and throughout the play he helps keep the plot on the fast track.

Naturally, you can’t do any sort of Road House without a great Patrick Swayze. Luckily, Elrod has Luke Elder. Like most of his cohort, Elder bears enough resemblance to his cinematic counterpart to tickle the familiarity nerve for anyone who knows the film ― a phenomenon aided by Raquel Shull’s simple but thoughtful costumery.

Far more important, though, is how well Elder portrays Dalton’s hodgepodge of machismo, sensitivity, Zen pretense, and sulky sex appeal. By never giving the audience so much as a knowing wink in even the most comedic moments (his shirtless, impassive posture while his sexy doctor love interest (Emily Formentini) stitches him up  sans anesthesia is priceless), he’s as funny as can be. 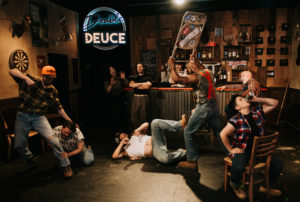 This holds for the entire cast. From the biggest to the smallest role, everyone is faithful to their part, letting themselves be ideal vehicles for fleshing out Elrod’s pitch-perfect parodic universe. Such restraint leaves room for the occasional well-timed improv (on opening night Young broke the laugh-o-meter with an observation about a pool cue), but mostly the actors are funny because their characters are completely in earnest.

Although you don’t need to know Road House to get in on the fun, initiates will be delighted and impressed. Elrod manages to distill the entire film ― from major plot points to idiosyncratic details ― down to about an hour. The character introductions. The facial expressions. The memorably unlikely fight scenes. Really, everything but the monster truck ― including, of course, the ever-present, blindman-fronted Double Deuce house band, which does double duty scoring several dramatic scenes.

Maybe you don’t know me, but if you do, you know that the odds of my liking a play fitting the general description of Love, Thunder, and Dynamite: A Roadhouse Parody were near zero. But aside from its terrible title, this play works on every level. Fun, funny, and a treasure hunt for lovers of bad ’80s cinema. So maybe I don’t know you, but I’m still going to give you a piece of advice: see this.

Love, Thunder, and Dynamite: A Roadhouse Parody at the Garage Theatre