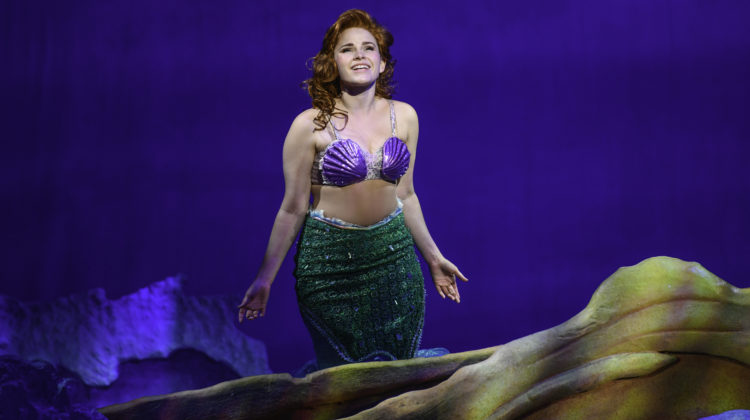 When Your “Little Mermaid” Has a Perfect Lead and Imperfect Staging

My only experience with The Little Mermaid, the film that launched Disney’s second wave of animated classics, is a Moonlight Movies on the Beach screening last summer, so clearly the complaints you’re about to read are not those of a purist. I don’t care what skin or hair color Ariel has. I don’t know what Ursula is supposed to look like. I can’t even tell you which songs are original to the stage adaptation.

I can, however, see and hear when something doesn’t work on its own merits. So although Musical Theatre West serves up a serviceable show overall, obvious shortcomings leave me feeling this Little Mermaid is less than she might be.

But let’s be clear right off: Katharine McDonough is a perfect Ariel. Perfect. With seeming effortlessness, McDonough makes every note her own, milking every expressive possibility from her songs, with even her quietest and most subtle inflections cutting clearly through the mix. Her acting is equally good, extracting all the humor and pathos there is to get from what is (let’s face it) not the deepest of scripts. And since people buy tickets to The Little Mermaid not for depth but a good Ariel and a lot of spectacle, you’re going to come away from this show at least half-satisfied.

More than half, actually. There’s certainly more than McDonough to like. As Ursula, via sheer force of personality Cynthia Ferrer finds more humor than there is on the page. Meanwhile, as her minions Flotsam and Jetsam, Jacob Hoff’s and Matt Braver’s voices are wonderfully intertwined during “Sweet Child”. There are also a few idiosyncratic details that make for hilarity, such as a radio-controlled crab car and a queer candidate for Prince Eric’s (David Burnham) hand.

Several possibilities, however, feel less than fully realized, as if Musical Theatre West ran out of time or money to get them right. A strangely disappointing moment comes in Ariel’s secret grotto. After a big build-up, an enraged King Triton (Marc Cedric Smith) points his trident at her heap of human whatsits and thingamabobs, and…well, there’s a bit of steam, and a couple of gadgets and gizmos from the top shift downward about three feet. That’s it. It’s ridiculous to have Ariel lamenting the complete destruction of her collection when it’s sitting right there in plain sight, little altered for all her dad’s sound and fury.

Too often there isn’t enough flash. Daniel Smith choreography for “Daddy’s Little Angel” ― our introduction to Ursula, Flotsam, and Jetsam ― seems to designed to draw attention to just how empty the stage is at this point. “Under the Sea” has a different problem. This is clearly one of The Little Mermaid‘s biggest moments, but rather than pull out all the stops, Smith and director Danny Pelzig make the curious choice not to have any of the number’s many dancers take to the air (as Ariel and other characters do elsewhere ― whether flying or swimming ― to fine effect).

Musically, Musical Theatre West gets it mostly right. For every weakness (sometimes Burnham’s singing is less than inspired; the counterpoint of “If Only (Quartet)” starts off shaky) there is strength (Flounder (Connor Marsh) and the six mersisters make harmonic magic during the last half of “She’s in Love”), even though compositionally The Little Mermaid suffers from a condition plaguing most musicals: having one or two songs that make the rest seem pedestrian by comparison. In A Chorus Line it’s “What I Did for Love”. In Guys & Dolls, it’s “Luck Be a Lady”. Here it’s “Part of Your World” (“Under the Sea” is a close second). Fortunately, McDonough gets to sing it, and as with everything she touches, it’s golden.

Yes, this Little Mermaid could be better. If you’re a fan, though, you’re not going to come away from this production unsatisfied. This Ariel is just too good.