Barragán at the Border 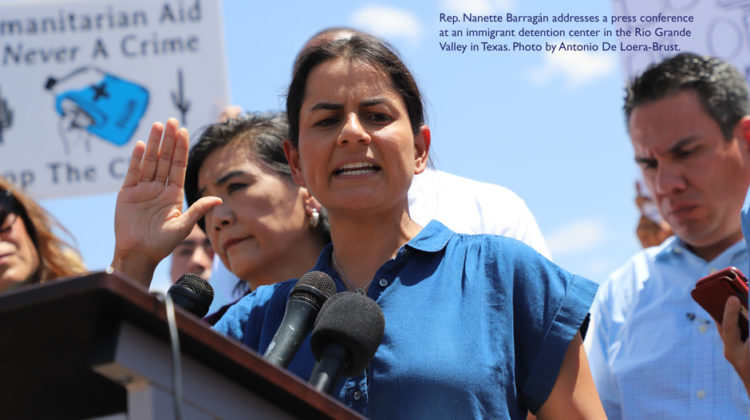 Barragán at the Border

On July 1, Rep. Nanette Barragán (D-San Pedro) was part of a delegation organized by the Congressional Hispanic Caucus that toured immigration facilities in the Rio Grande Valley and reported disgusting conditions. The same day, ProPublica reported the existence of a secret Facebook group of 9,500 current and former Border Patrol agents who joked about the deaths of migrants and made obscene comments about congresswomen.

The horrifying conditions described by the delegation were confirmed the next day, when the inspector general of the Department of Homeland Security issued a management alert headlined, DHS Needs to Address Dangerous Overcrowding and Prolonged Detention of Children and Adults in the Rio Grande Valley.

The day after that, Barragán and Rep. Joaquin Castro, a Democrat of San Antonio spoke on a press call sponsored by United We Dream, along with four Texas state representatives who joined the tour. State and local representatives had previously been blocked from inspection efforts undertaken on their own.

“This was a very different experience than the last time that I went,” Barragán said. “I’ve been down there a few times. There are a lot more restrictions being placed on members. They try to confiscate phones; all of a sudden they said we couldn’t talk to people. And so it is becoming a lot more combative.”

Barragán suggested that the increased tension stemmed from “all the work that’s being done on the ground to get the stories out,” and the resultant rise in public ire. “The work is critically important to continue, to highlight the stories,” she said. “With the inspector general’s report coming out, there should be continued outrage.”

“Atrocities have been carried out in Trump’s name by ICE and CBP,” said Greisa Martinez Rosas, of United We Dream. “Under the Trump Administration we know that 24 immigrants have died in ICE custody, with more dying under the watch of other federal agencies like CBP, including five children.”

When Donald Trump became president in January 2017, no one had died in ICE custody for 10 years.”While all of this is going on, Trump and Republicans have been having a debate over semantics,” Rosas said.  “What do we call these places, detention centers? Concentration camps? I’ll tell you what we don’t call these places: humane. These are not places for human beings.”

“We were in that one cell with the women from Cuba for about 45 minutes. And it’s clear that the human rights were being neglected,” Castro said. “They didn’t have a sink that was working to provide them water to wash their hands after they use the restroom, for example. Or for easily obtainable drinking water. Several said that they had not have their medications given to them in days; some of them said that they had gone 15 days without being able to take a bath or shower.”

The inspection tour followed the passage of an emergency spending bill, without any of the corrective protections included in an earlier House version. “0 negotiation with the House,” Rep. Alexandra Ocasio-Cortez tweeted. “We offered crucial amendments to protect children and families — none are even being considered.”

“This system is completely broken,” Castro said. “So it’s not just a matter of pumping more cash. Things have to change in terms of the standards of care and the medical treatment that’s provided…. What we’re seeing is willful neglect of these people.”

“These stations are supposed to be holding facilities,” said Lina Ortega, a Texas state representative. “The detainees, the migrants, the families, the persons being held there are only supposed to be there for 72 hours. And they have turned into detention centers.”

As far as food is concerned, Ortega said, “We saw cups of ramen noodles, we saw Kool-Aid, we saw chips, and we heard about frozen burritos there. We didn’t see any milk. We didn’t see any fruit. We didn’t see any vegetables. They’re not cooking or preparing any kind of meals. This is the same food that they receive day in and day out while they’re there. There is no appropriate food for children. When I asked about exercise—because I don’t really see any place that they can exercise—I was told that exercise is not necessary because they’re supposed to be there only for temporary stay. But that’s not what it’s been turning into.”

“There is still separation happening of family units,” Barragan said in a separate statement, citing several specific examples she encountered.

Ortega explained part of the reason why. “Families are defined as being a mother and father or a legal guardian,” she said. “So if the child is with an aunt and uncle, grandparent, even a brother or a sister, they will separate them, because they’re not considered to be family.”

Texas state Rep. Mary Gonzalez lives in the town of Clint, home to one of the facilities.“What I’ve seen, being at the front lines, is how traumatic this experience is for border communities at all levels,” she said. “We do not have to, in this country, detain children. We do not have to detain grandmothers.

Monday when we went on our tour, we saw a 70-year-old grandmother in a detention cell. We do not have to be this country. And sadly we are…. Everything we saw was an intentional strategy to dehumanize.”

“This is our moment of moral and political clarity,” Rosas declared. “We are in a moment of choice where we can either continue Trump’s policies of family separation and criminalization of immigrants allowing our government to keep killing immigrants and refugees, or we can fight back.

“The idea that we only need to provide more money to provide a few basic needs to fix the current immigration humanitarian crisis is wrong. On the contrary, we have to ensure that ICE and CBP are held accountable, that there is a defunding of these agencies, and more accountability and oversight over them.”