Why We Don’t Eat Califor... 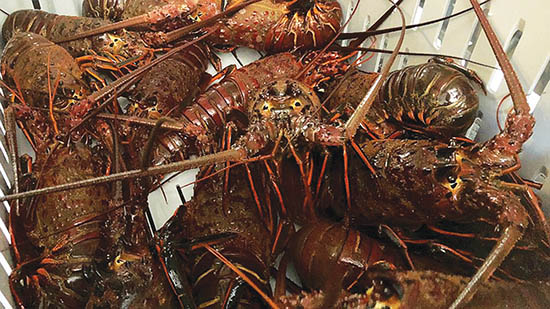 (Even though they taste better)

I’ve always found it strange that with all of the Lobster Festivals we have in Southern California, a state on the edge of the Pacific Ocean no less, would have to export lobsters from a state off the shore of the Atlantic Ocean. There are fully formed fishing fleets at the Port of Los Angeles. It never occurred to me that Southern California lobster festivals should feature Californian lobsters. What food and culture writer Clarissa Wei story published in VICE a few years ago turned my whole head around.

Wei recounted a scuba diving excursion that became the basis for her story at Santa Cruz Island. She had joined scuba diver Hank Parfitt, whose from North Carolina, on his annual on his trip just for the  California fresh spiny lobster. Wei quoted the 40-year veteran scuba diver saying that, “catching lobsters, for him, was a combination of Christmas morning and Easter egg hunting.”

Wei reported that in the U. S., but for scuba divers like Parfitt, the California spiny lobster won’t be found on the average dinner table. Up to 95 percent of commercially caught lobster is shipped to China.  There is a high demand for the “bugs” as Parfitt calls them in China. That demand has driven up the cost of the spiny lobsters in a short time.

Increased demand from China has raised prices of the California spiny lobster. Americans don’t want to pay that much for the delicacy that comes from it’s own West coast waters. Instead we buy Maine lobsters which are cheaper.

This is how Americans generally make the bulk of their purchases no matter what it is, we look for the best bargains. The curious part is, it’s understandable with most luxury purchases — which the spiny lobster is. But when it comes to necessities like everyday food, this is a curious trait we humans have. Cheap does not always mean better. We see that in the rising health issues of Americans who are stuck on a diet of low nutritional value — sugars salt fat and fast food. Much has improved with more access and education about healthier foods but health statistics don’t lie. Diabetes remains the seventh leading cause of death in the U.S. And more often, eating locally and fresh means not as much processed food which is better for everyone’s health.

The Owner of Catalina Offshore Products, Dave Rudie, one of the largest seafood import and export companies in California said the problem is that as much as people talk about buying local, they actually buy based on the price.

“We talk about the factories overseas and people taking our jobs. But the truth is that Americans want cheaper stuff,” Rudie said. “That means Maine lobsters instead of California ones because Maine lobsters are cheaper.”

For the writer, her trip out on the waters off the Channel Islands proved to be a sensory as well as a learning experience. After the divemaster in her group spears calico bass and a large  sheephead. Sitting on the deck of the boat at sunset, overlooking the water, Wei and her boatmates eat raw calico and sheephead miso soup. Wei pops freshly cracked open scallops and uni into her mouth like candy. It’s at this point she recognizes she is eating a bounty of seafood from California, in California that most Californians rarely get the chance to eat.

Wei noted the spiny lobster is not completely inaccessible. They can be purchased online buyers like Catalina Offshore Products and a few restaurants and markets like Mitch’s Seafood and the Tuna Dockside Harbor in San Diego.

But ultimately, most of our best-quality seafood is exported abroad. One-third of “seafood American catch” gets sold to foreign countries.

We Americans also ship so much other domestic food abroad. The point is well highlighted in a final quote from a scuba instructor, Garrett Lu who said, “…. there’s a value that comes from eating in your own backyard. It’s a way of connecting with the sea and understanding our own ecosystem.”