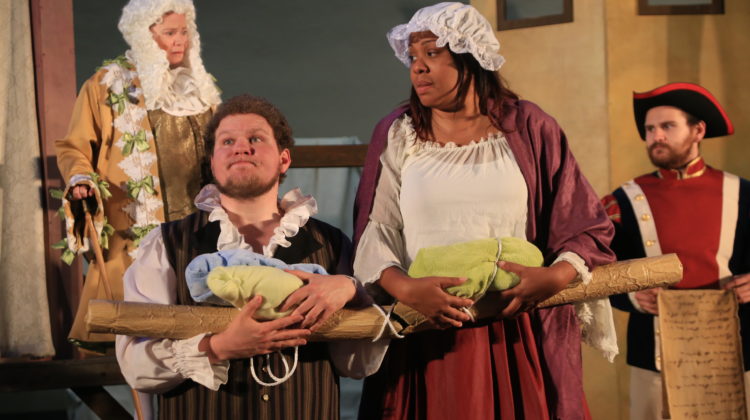 “The Comedy of Errors” Great Fun Despite Poor Reputation

Written before he turned 30, The Comedy of Errors is just about universally regarded as one of William Shakespeare’s worst works. The laughs are base, the plot is beyond ludicrous, and the dialog completely lacks the nuance that distinguishes the Bard from almost literally every other writer in history prior to the 18th century.

But a funny thing happened when Shakespeare by the Sea got a hold of it: because of pitch-perfect understanding of this inferior play’s strengths, they make that shit work, delivering maybe the most amusing performance I’ve seen in four years of covering their annual summer shows.

As you already know even if you don’t really know Shakespeare, the man is a genius. Hamlet, Julius Caesar, As You Like It, Henry IV (both parts)…. Even when the storylines contain holes and the conventions feel dated, the themes, insights, social commentary, and sheer power of the prose seem eternal.

The Comedy of Errors displays none of that genius. Start with the premise: Either 25 or 33 years prior to  the beginning of the play (take your pick ― Shakespeare says both), twins were born to Aegeon (Andy Kallok) and Aemilia (Sonja Inge) the same day an impoverished stranger gave birth to her own set, which were sold to Aegeon to raise as his sons’ servants. Shortly thereafter, a shipwreck separates Aegeon and Aemilia, each with one twin from each set. Aegeon and the children in his care, his son Antipholus (Alex Elliott-Funk) and Dromio (Brendan Kane), make their way back to their native Syracuse, while Emilia and the children she has are taken to Ephesus. She also calls them Antipholus (Jonathan Fisher) and Dromio (Melissa Green), for reasons we never hear, rather than try to get back to Syracuse, she gives them up to [we’re never told who] and cloisters herself in an abbey. Now young men, Antipholus and Dromio have arrived in Ephesus to search for Antiphous’s brother, and because on this day both the two Antipholuses and the two Dromios happen to be dressed exactly alike, confusion abounds, as not only the townspeople but Antipholus of Egeon’s wife (Olivia Saccomanno) and even each Antipholus and Dromio mistake them for their twins.

Obviously, though, the ridiculousness of the plot is just an excuse to set up what the play is all about: fun with mistaken identity, a theme Shakespeare employs to much more sophisticated effect in several later plays (most notably Twelfth Night, or What You Will). The resulting humor is completely lowbrow, often maybe two steps above a pie in the face.

That this trite nonsense is so much fun is a credit to how perfectly director James Rice and his cast understand what can be mined from the script. If Twelfth Night contains a mother lode of gold, The Comedy of Errors has only a thin vein of pyrite, but Shakespeare by the Sea digs up all of it, and we can’t help but enjoy the shine. There isn’t a cast member who isn’t up to their task, but because Shakespeare tends to give the funny to his clowns, the Dromios have all the best lines, which allows Green and Kane to stand out. With his frenetic energy and razor-sharp delivery, Kane in particular owns every scene he’s in. There isn’t a bad pun he can’t make good on. 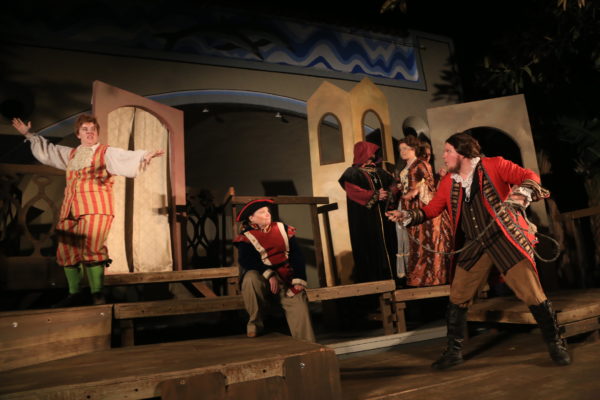 Visit shakespearebythesea.org for performances of not only The Comedy of Errors but also Henry V, with shows in Long Beach, Seal Beach, Palos Verdes, Torrance, and other O.C. And L.A.-area cities

One of the reasons Shakespeare by the Sea is able to do so much with so little is that they know how to stay alive to the moment. It’s not the kind of thing you do with Hamlet in a theater, but with a farce in the park you have a chance to improve the overall performance if you take your surroundings into account. Thusly did Jonathan Fisher earn the biggest laugh of the show with a quick improv recognizing a barking dog in the front row. The dog won’t be there for every show, but the moment highlights just how alive this cast is to the possibility of the moment.

William Shakespeare is the most renowned writer in world history. Although The Comedy of Errors is not the way to find why, you might never have more simple fun with the man than with what Shakespeare by the Sea is doing with it. This is a play that’s generally overlooked, and with good reason. That’s not just a statement about the quality of play, however: it’s also an opportunity.

The Comedy of Errors at Shakespeare by the Sea