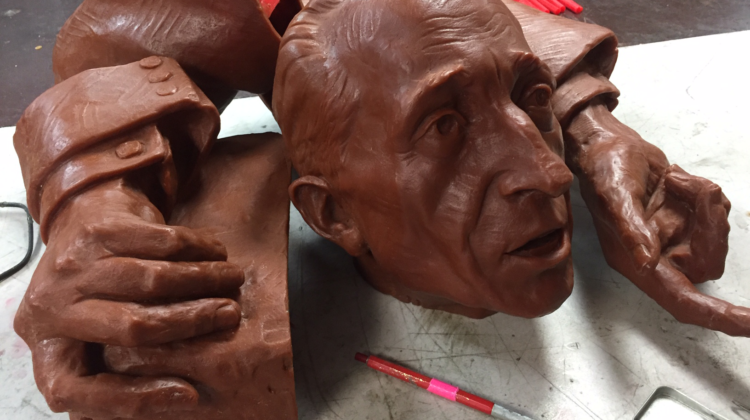 Eugene Daub is old friends with Harry Bridges, even though they never met. Bridges died in 1990, a few years before Daub moved to  San Pedro. The artist ended up spending many years becoming intimately familiar with the sharp angular face of this West Coast labor icon. His recently completed bronze statue of Bridges — due to be unveiled July 28 during a noontime ceremony at the new ILWU dispatch hall in Wilmington — is the third likeness of the historic figure that Daub has created.

Daub also created the bust of Bridges that is featured at the ILWU memorial on Harbor Boulevard in San Pedro, as well as, the bust that sits in front of Harry Bridges School in Wilmington.

What did Bridges do to deserve three bronze memorials? He founded the International Longshore and Warehouse Union. He rose to that historic role from working class, immigrant beginnings –not unlike another labor icon, Joe Hill, who lived in San Pedro for less than three years before meeting his demise in Utah in front of firing squad.

Alfred Renton Bridges was born in Melbourne, Australia in 1901 to parents with upper-middle class bearings. His father was a successful realtor.  At age 16 he went to sea as a merchant seaman and joined the Australian sailors’ union. He took the name Harry from an uncle, who was a socialist and an adventurer.

Bridges was a Wobbly for a short time during the International Workers of the World’s early years. He didn’t stay a Wobbly, but he was profoundly influenced by it and it affected how the West Coast division of the International Longshore Association was transformed into the ILWU. Bridges’ time with the Wobblies coincide with the emergence of the idea that, “An injury to one is an injury to all.” The current motto used by the ILWU was a chant of the Industrial Workers of the World when they were arrested

Eugene Daub has spent his career creating replicas of American heroes. Most famously he created the statue of civil rights icon Rosa Parks that sits in the U.S. Capitol building. He also designed and created a bust of the first openly gay person elected to public office, Harvey Milk, who was tragically martyred during his first year in office as a San Francisco supervisor. Milk’s bust sits proudly in the main hall at San Francisco City Hall.

Daub is known for capturing the profound humanity of his subjects. Rosa Parks’ face reflects her quiet determination to remain seated on the bus. Harvey Milk’s toothy smile mirrors the inner joy of bursting open the closet doors that confined the gay community. The figure of Harry Bridges passionately leans forward, pointing his fellow longshoremen towards  the battle for unionization of the West Coast ports.

Memorializing such powerful historical figures requires a long process that begins with paper and pencil.

“First I make a series of 10 or 15 rough sketches,” said Daub. “Then I can take those sketches to the client to see if they like it.”

His next step is to create a metal armature and build around the steel support with clay. Each detail of the subject is carefully sculpted in the clay that will eventually become the bronze statue. This process produces a small sized maquette, which is the model for the larger sculpture. The creation of the maquette enables the sculptor and the client to visualize how the three-dimensional sculpture will look.

At this point, digital technology enters into the process.

“I take the maquette to a digital printing service,” said Daub. “They scan the entire three-dimensional model and they will replicate the miniature into a foam 3-D model at whatever size I ask. The Harry Bridges model went from 24 inches to 6 foot, 4 inches.”

Daub then takes the foam model to his studio for small refinements before taking the whole piece to the foundry to create a rubber mold.  Wax is painted inside the mold during the ‘lost wax’ process. Ultimately the bronze is poured into the cavity to create the finished sculpture. The foundry process itself usually takes 10 to 12 weeks.