Ginsburg’s Reasoning of Why ... 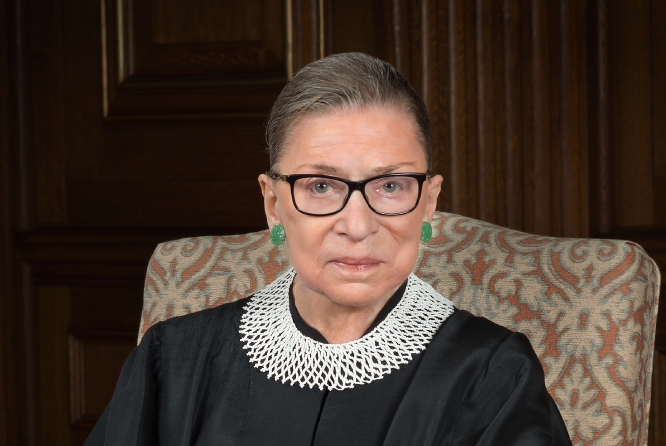 Ginsburg’s Reasoning of Why Reproduction is a Woman’s Right

Excerpted from My Own Words: Ruth Bader Ginsburg by contributors Mary Hartnett and Wendy Williams

Note: Shortly before the Supreme Court’s Roe v. Wade decision made abortion legal in 1973, Ruth Bader Ginsburg, now a much-admired Supreme Court justice but then a crusading young lawyer for the American Civil Liberties Union, was involved in a different kind of abortion case. In Struck v. Secretary of Defense, the American military was attempting to force a female service member to have an abortion or leave the service. Ginsberg, representing the plaintiff, argued that violating a woman’s reproductive rights violated equal protection and due process and amounted to sex discrimination. She has discussed the case before the Senate Judiciary Committee, in a 2008 law lecture and a 2016 book.  — Lyn Jensen

At her confirmation hearing before the Senate Judiciary Committee in 1993, Ruth Bader Ginsburg testified that she “first thought long and hard” about abortion rights in the early 1970s, when she was a lawyer for the American Civil Liberties Union and took on Struck v. Secretary of Defense. That case was on the Supreme Court’s calendar during the same term Roe v. Wade was decided, although the court never actually heard it.

Susan Struck, the plaintiff, was an Air Force captain who became pregnant while serving in Vietnam she sued the Air Force after it said she would have to either get an abortion or leave the Air Force. She told the Air Force that she didn’t want to get an abortion. She wanted to take some vacation days she had saved up and use them to  cover the time she needed to give birth, and then put the baby up for adoption because abortion violated her Roman Catholic faith.

Here’s how Ginsburg explained her approach — that sex discrimination includes discrimination because of pregnancy — to the Senate Judiciary Committee:

Next, then we said that the Government is impeding, without cause, a woman’s choice whether to bear or not to bear a child. Birth was Captain Struck’s personal choice, and the interference with it was a violation of her liberty, her freedom to choose, guaranteed by the due process clause.

Finally, we said the Air Force was involved in an unnecessary interference with Captain Struck’s religious belief.

So all three strands were involved in Captain Struck’s case. The main emphasis was on her equality as a woman vis-à-vis a man who was equally responsible for the conception, and on her personal choice, which the Government said she could not have unless she gave up her career in the service.

In that case, all three strands were involved: her equality right, her right to decide for herself whether she was going to bear the child, and her religious belief. So it was never an either/or matter, one rather than the other. It was always recognition that one thing that conspicuously distinguishes women from men is that only women become pregnant; and if you subject a woman to disadvantageous treatment on the basis of her pregnant status, which was what was happening to Captain Struck, you would be denying her equal treatment under the law…

The decision whether or not to bear a child is central to a woman’s life, to her well-being and dignity. It is a decision she must make for herself. When Government controls that decision for her, she is being treated as less than a fully adult human responsible for her own choices

Struck lost in the lower courts but on Oct. 24, 1972, the Supreme Court agreed to hear the case. That never happened, however, because the Air Force waived Struck’s discharge and allowed her to remain in the service before that date rolled around. The Roe decision came out three months later.

Ginsburg gave her account to law students in a summer program in July 2008, according to the 2016 edited collection of her remarks and writings My Own Words, in which she explained solicitor general Erwin Griswold had recommended that course of action for the Air Force because he thought the government could potentially lose the case.