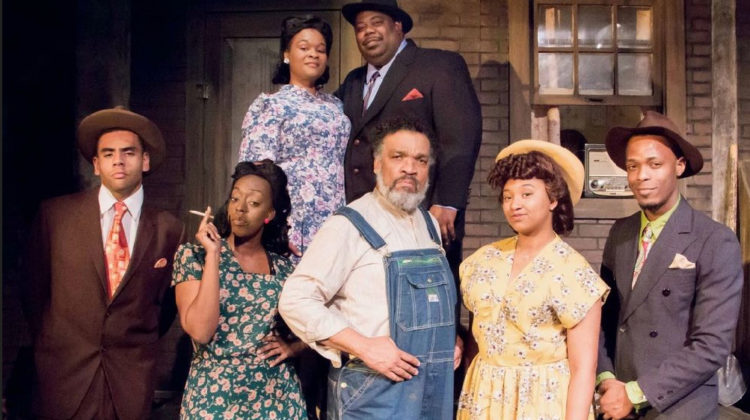 There’s nothing not to like about the conceit behind August Wilson’s Pittsburgh Cycle, the 10 quasi-connected plays that idiosyncratically dramatized a century of struggle in the life of Black America.

Considering the cycle, however, is different than taking each play on its merits. My job here is to give you a sense of whether you would do well to put your good money down on Seven Guitars as a single piece of theatre. So here goes.

After stealing away to Chicago for a recording session and serving 90 days in the workhouse on charges stemming from little more than the color of his skin, Floyd “Schoolboy” Barton (Rayshawn Chism) is back in postwar Pittsburgh, where he hopes to win back Vera (Latonya Kitchen) and capitalize on his hit song by pulling together the funds to get back to the Windy City, make more music, and get himself a piece of the American Dream. But no matter which way he turns, it seems the road is blocked, driving him to desperate measures.

Despite the length of Act One (over 90 minutes), you spend intermission wondering whether Seven Guitars is ever going to get anywhere. This is not a play with much dramatic action, and ponderous ruminations on roosters (Wilson’s deftness with colloquial dialog sometimes leaves him a little too in love with the sound of his (characters’) own voice) don’t help.. Floyd is frustrated by his lack of opportunity in the so-called Land of Opportunity, Vera wrestles with whether she should give Floyd another chance and Hedley (William Warren), a TB-ridden alcoholic, nurses delusions that New Orleans jazz legend “King” Buddy Bolden will one day rise from the grave with enough money for Hedley to buy his own plantation (“where no White man will tell me what to do”). And that’s about it. The conclusion, if not quite deus ex machina, nonetheless rings false, particular as staged by Long Beach Playhouse, where the fight choreography in two brief scenes of violence is as good as no fight choreography at all.

That is, however, just about everything bad there is to say about the show. With a cast this good, we really get to appreciate Wilson’s way with the dialog, which is simultaneously believable, stylized, and often funny. On that last count, Ebonie Marie (as Louise, the owner of the Hill District house that is Seven Guitars‘s sole setting) is so good in Act Two that you wish the play were a comedy so you could get a lot more of this. As Hedley, Warren avoids being a caricature of derangement, despite the fact that his character went completely around the bend long before curtain-up; and he holds our attention fast during his two vocal solos. And in the lead role, Chism manages Floyd’s wry humor, soft meditations, and explosive anger with equal ease. The only blemish on the entire cast’s otherwise pristine performance  was the recurring sense that they were a half-beat late replying to each other.ut good as they are otherwise, I predict this was merely an opening-night rhythmic kink that will be ironed out by the time you read this.

The aforementioned weakness in fight choreography is the only misstep by director Rovin Jay. For the most part his blocking is worthy of the dialog (although there’s nothing to be done when the monologs get overlong), and the solid set and straightforward lighting design serve the material perfectly.

A deceptively simple detail that furthers the spirit of the play is the extensive use of classic blues, which we hear both between scenes and as diegetic sound emanating from a radio that provides an aural backdrop for much of the action. It’s probably not exaggerating to say that the blues is a sonic representation of sBlack struggle in the United States, a musical reaction to troubles both universal to humankind and specific to being downtrodden by racial inequity. That is Seven Guitars all over, and after experiencing the play with this music woven into its fabric, any production without it would seem lacking.

To my taste, Seven Guitars is a bit lacking in plot and overflowing with words. Nonetheless, there’s much to like in this production. And if you’re a bigger August Wilson fan than I, perhaps there’s little not to love.