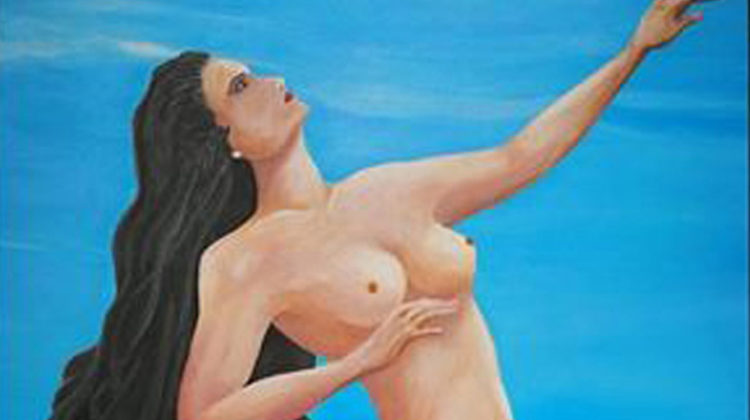 Early in May, inspired by the prospect of San Pedro’s first pride festival, the proprietors of Gallery Azul sent out a call for works by Latinx artists from the LGBTQ community for a juried show before, during and after Pride at the Port June 15.

It was the kind of move that has been characteristic of Gallery Azul since Ray Vasquez and Cora Ramirez-Vasquez opened the space in 2006. So was the response they received. When the deadline for submissions arrived last week, the exhibit had a roster of artists from San Pedro, Long Beach, Pomona and Claremont.

Like so many of the gallery’s contributions to the quality of life in San Pedro, the Pride at the Port exhibit was mostly a matter of  Gallery Azul’s co-founders remaining true to their mission — to provide a venue and platform for working, emerging artists to collaborate, and showcase contemporary and cultural artworks.

Ramirez-Vasquez said the inspiration for this show came from multiple places but the most influential was the history-making occasion of San Pedro’s first Pride festival. The couple has  many friends in the LGBTQ community, especially artists, and they strongly support and advocate for the community. The exhibit made sense to them.

For this event they placed additional focus on the Latinx culture, which they describe as “collectivist,”  a condition that increases the risks to those mulling whether or not to come out as lesbian, gay, bisexual, transgender or queer, risks which, in turn, can generate new fears and challenges. Gallery Azul believes that  education is essential to the enlightenment that will enable  a community to  be supportive of its LGBTQ family members. Of course, the attention directed toward the Latinx community also comes from the fact that Gallery Azul is Latinx owned, coupled with their desire to highlight how amazing and creative the community is.

Gallery Azul has made its mark as a cultural gallery due to its themed shows with a focus on informing the community about the importance of events that impact us all. Vasquez and Ramirez-Vasquez are all about diversity. “Without our colorful world, we would be bland.”

You are invited to Gallery Azul before Pride at the Port to have some cafe con pan or some mimosas, and other Mexican delicacies.