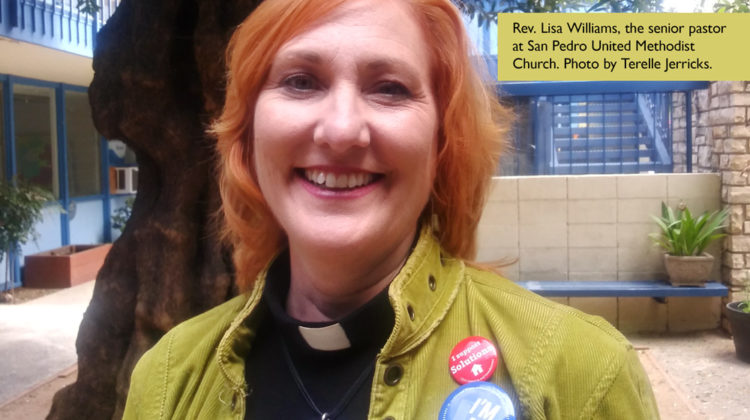 Community members partner to end the homeless crisis; this is what grace looks like

Six days before the May 30 health fair that featured mobile showers, free haircuts and lunch, the senior pastor of the San Pedro United Methodist Church was still receiving donations for towels and hygiene kits for the event. The health fair was sponsored by Harbor Interfaith Services alongside a constellation of aid organizations including the San Pedro Community Clinic, Toberman Neighborhood Center, the Los Angeles County Department of Mental Health and the Los Angeles Homeless Services Authority.

“What is so incredible is that people are coming together to make hygiene kits, donate towels… they are asking, Do you need lunch? Do you need granola bars? Water…What do we need? How can we help to be a part of the process?’ said Pastor Lisa Williams. “That’s really encouraging for me to see that happening and that level of energy.”

Pastor Lisa, as she is generally known by her congregates and other members of the community, had also been collecting jackets and other items of clothing to give away.

The response had been so great that she worried whether she had enough jobs for volunteers.

To ensure that these services and resources reached the people most in need, LAHSA and Harbor Interfaith spread the word through caseworkers who have been diligently making contact and attempting to enter the unsheltered into the county-wide system.

Pastor Lisa estimated that between 15 and 20 volunteers from her congregation alone will be participating at the fair. The May 29 event provided access to mobile showers and free hair cuts.

“I am encouraging people, especially to our volunteers is to be a gentle presence because that’s what we can do,” she said.

Shortly after she was hired to become the senior pastor of the San Pedro United Methodist Church, she realized the adjacent lot it owned was an enormous asset.

San Pedro United Methodist Church is proposing to build permanent supportive housing with wrap-around services for the unsheltered and affordable housing for families whose income falls under 60 percent of the average median income, as defined by the Department of Housing and Urban Development.

“We know wrap-around services are the key to helping folks get off the street and stay off the streets,” Pastor Lisa said. “There will be studios, one and two bedroom apartments.”

The church is working with 10×10 Development, a nonprofit firm, to build a five story project: four stories of wood frame housing over a 1-story concrete podium for a total of 49 units. The mixed-use building will include 25 units of supportive housing and 23 one and two bedroom units for low-income families.

The podium level will have recreation and outdoor space, office space for property management and onsite services, 3,300 sq. ft. health center and 13 parking stalls. A lot on Grand Avenue and 5th will provide 50 more parking spaces.

Harbor Interfaith Services has been engaged as the project service provider.

Pastor Lisa explained the firm is working on the funding strategies to make the mixed use project happen.

“We know that the funding process will take a year or so. It is somewhat being expedited right now because there is such a crisis,” she explained. “So people are trying to move it forward.”

The reverend was referencing the monies generated by the Los Angeles county Measure H which raised the county sales tax by a quarter of a cent and the city of Los Angeles Proposition HHH a bond measure to raise $1.2 billion.

She hopes that the project would be completed by 2023.

One of the key supporters of this project is Amber Sheikh Ginsberg, the leader of the Council District 15 Homeless Working Group, who is supporting this plan.

Through the coalition of the San Pedro Faith Consortium and Family Promise, Pastor Lisa said it was revelatory seeing the need of families living on the margins… families who are just one paycheck away from losing everything.

“We all became very aware of the need for children and families, so that’s where a lot of that passion came from with regards to affordable housing,” Pastor Lisa said.

The history of the San Pedro Methodist Church, where the current sanctuary was built in 1923, has also inspired Pastor Lisa.

“As I dug deeper into the church and into this community, what I realized was that this place has been here for about 100 years,” Pastor Lisa said. “During World War II, it was a beacon of light for soldiers and sailors [who] would come to get a shower, a letter home and a hot meal.”

The pastor noted that the itinerant guests would put their names on the great big map of the world in the sanctuary to identify others who came from their hometowns.

“This church has a history of being a place of refuge,” she said. “That’s the real calling we have here at this church and we want to continue that mission.”

Pastor Lisa admits that the path will look different from the one traveled by the church 50 or 60 years ago.

“It’s still a very important piece of what we believe on this corner of 6th and Grand,” she said. “It’s to provide that hope for people during times that don’t feel so hopeful.”

The San Pedro Faith Consortium, which includes the Garden Church on lower 6th Street, St. Peter’s Episcopal Church, the Jewish synagogue Temple Beth El and the First Presbyterian Church was formed almost four years ago as a way to connect and partner with each other on different projects including Family Promise.

Family Promise of the South Bay is an affiliate organization alongside more than 200 others throughout the United States. It was started by a woman in New Jersey who daily walked by her high-rise place of work and saw people who were hungry. She and her two sons decided to make lunches for the people they saw in need, and not just peanut butter and jelly sandwiches, but also complete, balanced meals.

As they did this work, they began to ask what it would look like if the people they saw in need had a place to stay. It was a project few were willing to take on, but then a group of people asked what if they moved from church to church? What if a group of people lived in a church for a week and they got a place to sleep and a meal to eat and could stay in their school of origin? They could continue to look for a place and save the money that they are earning to get them back on their feet quicker.

This, Pastor Lisa said, is infinitely better than bouncing around from hotel room to the next to avoid revealing their homelessness.

“There’s a whole shame factor included in it and they have exhausted all the couch surfing they could do, their family members can’t provide any more assistance,” Pastor Lisa said. “Sometimes it’s a situation where they are only one paycheck away from not having a car to get them to work.

“What I have come to realize while doing this advocacy work on homelessness is that everybody that you talk to has been affected by homelessness in some way.”

Pastor Lisa noted some of the structural implications that lead to homelessness, including racism, gender bias and income inequality.

When asked if she has faced opposition in making this project a reality, Pastor Lisa’s face lit up, “I’m really delighted to say that I haven’t,” she said.

She could not have made such a report last year when it was announced that the San Pedro United Methodist Church was looking to set up something akin to the ill-fated navigation center on the adjacent lot in order to provide services to the homeless. Community reaction was swift and the church backed off the plan.

“We have done an awful lot of groundwork,” she said.

That meant building stronger relationships with local elected officials, the neighborhood councils, the Chamber of Commerce and their community partners.

When asked about her hopes for the Bridge Home Shelter project that’s set to be built on the Caltrans park and ride on Beacon Street, Pastor Lisa was hopeful still.

“I hope that it can become a catalyst for conversations with the community, our service providers and those who oppose [the Bridge Home Shelters] because of fear,” she said.

“I hope all parties come together and really create a system and a picture of success and accountability,” she said. “We can’t always affect all of the results, but we do need to listen to people. If something is not happening, we need to hear that and try and fix it.”

This journey on which she has been leading her church has kept her encouraged. She said she is starting to see people in San Pedro really talk to one another and connecting the different dots and resources far greater than ever before.

“I’m hoping for better education and better conversation around homelessness,” Pastor Lisa said. “If we can do that, then we will be able to take it to the next level.”