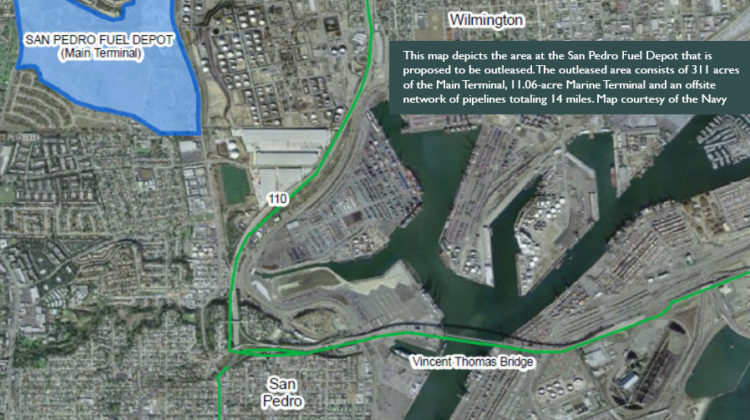 The Navy’s most recent steps toward re-opening the decommissioned Naval Fuel Depot—technically known as “Defense Fuel Support Point” of DFSP—caught local residents by surprise. If they couldn’t say exactly why, it’s because the Navy is approaching the project via a commercial “outlease” that does not define the actual extent of what would be done on the site. Just under 164 acres are undergoing environmental remediation, which won’t be completed until 2022-2024. Only 43.1 acres would be available immediately.

A draft environmental assessment (EA) was released on April 19, with a comment period that was originally scheduled to end on May 20. But how to comment on a proposal that residents say lacks any obvious need and carries significant hazards, which it fails to acknowledge?

Alfred and Barbara Sattler gave it a shot by writing this comment on May 14:

The Navy has not cited any need for increased operations at the Main Terminal for the purposes of national defense in the environmental assessment. In fact, the site was declared surplus by the Navy only a few years ago because the Navy now has more modern facilities with a higher capacity elsewhere.

In March 2017, the Defense Logistics Agency, which manages the site, put out a story quoting its official John Cummings saying: “We are doing the right thing since commercial partners store bulk fuel and there is no need to maintain a government-owned facility.” As the Sattler’s note, there’s no explanation of how anything has changed.

Meanwhile, the comment period was extended through June 3 after Chuck Hart, president of San Pedro Peninsula Homeowners United, or SPPHU, brought the issue to the Northwest Neighborhood Council, which asked the Navy for more time.

“I made a call to the Navy,” NWSPNC President Ray Regalado told Random Lengths. “They were very open to say, ‘We’ll give an additional 14 days’ or something like that.” It’s not long enough for an official neighborhood council response to be drafted. “We are taking any comments people want to give us, so that we, in turn, can also send out a cumulative report.” There’s a comment page on the NWSPNC website as well as a May 29 meeting of the Community Issues Committee where comments were to be taken as we went to press.

But it’s still too little time for a meaningful public response. In its public comment, South Bay 350.org called for a minimum of 60 additional days extension, along with further and meaningful efforts to seek out public input, including hosting public workshops, publicizing the proposal in local newspapers, and reaching out to local schools, churches and organizations of all types.

On May 15, Hart submitted a comment from members of SPPHU, situated directly south of the main site that described the proposal to reopen the Defense Fuel Support Point as “reckless” and warned that it “invites further potential for disaster.”

SPPHU and the U.S. Department of the Navy have historically had a meaningful relationship. But in its comment, SPPHU noted: “This is a much different world than when the fuel depot was introduced into our neighborhood back in the ‘40s,” with significant new hazards introduced since—specifically, the Rancho LPG facility and added butane storage tanks at the Phillips 66 refinery.

“Frankly, we were relieved when in 2016 the Navy announced its closure, thereby eliminating ‘one’ of these several hazardous facilities surrounding our homes,” SPPHU stated.  “You are deceiving the public by not being specific about; a) how many new tanks there could be, b) where they would be located and, c) exactly ‘what’ is considered ‘areas historically used for operations’ in that 300-plus acre site.”

In a note appended to the comment, Hart recalled bringing the issue to the neighborhood council two days earlier. “I asked how many board members had received an environmental assessment notice and had the opportunity to respond. No one raised their hand.”

South Bay 350.org also wrote that “the Navy does not offer any compelling reason to renew and expand fuel operations at this location. In fact, given the potential for this facility becoming a terrorist target, would indicate that expanding this facility would be against national security interests …. We find it is incredible that the EA states, without adequate explanation, that there will not be any significant impact in any way from the proposed project. These conclusions, alone, demonstrate the perfunctory nature of the EA and the lack of understanding of the community in which the facility is located, including significant changes taking place right next door presently.

“There is already too high of a concentration of dangerous and/or polluting facilities for residents and business who are located within these Los Angeles Harbor communities … there is no justification for the storage of large quantities of highly flammable fuel when it creates a real risk of major casualties in the community in the event of earthquake, accident, fire, explosion or a terrorist attack.

“While the City of Los Angeles and the State of California are enacting broad and bold plans to transition away from fossil fuels and move toward clean and safe energy alternatives, it is truly disturbing that the Navy believes it is acceptable to come back into an already disadvantaged community and add more danger and burden to its residents.”

They, too, were caught by surprise, according to Sherry Lear, co-organizer of South Bay 350.org and a resident of Seaport Homes. “In both of those roles, I would’ve expected to receive notice,” Lear said. “And, I received none.” Seaport management heard nothing as well, she said. “I quite frankly found out about it very late and only because of Janet Gunter,” Lear said about the mass emailing that alerted many local activists.

Harbor City Neighborhood Council board member Caney Arnold raised basic questions about the underlying rationale, drilling down into the specific language of the EA and the federal law it references.

“There is no compelling rationale provided in the EA to even establish a need for the DFSP,” Arnold wrote. He went on to question the proposal’s supposed “Purpose and Need,” that “The need for the proposed action is to ensure the fullest possible use and maintenance of the Navy’s assets… in support of 10 U.S.C. section 5062,”  that section of federal law defines the Navy’s composition and functions.

“Nowhere in 10 U.S.C 5062 does it require the Navy to ensure the fullest possible use and maintenance of the Navy’s assets, or to even require any specific assets such as DFSP, San Pedro,” Arnold wrote. “Rather, 5062 calls for ‘prompt and sustained combat…’. The EA does not address how use of the DFSP asset is the best alternative for the Navy. Again, fueling by alternative means may in fact provide more benefit…”

Both would establish commercial operations with guaranteed priority service for the Navy as needed “during normal operations [an estimated 6 ships per quarter] and contingency scenarios.” But they are open-ended regarding further site development, leaving the proposal incredibly vague. There’s also a ‘no action’ alternative. However, several other alternatives identified earlier were not explored and are not being considered, including site conversion to full recreational or open space use—which many local residents seem ready to support—and Naval fueling at the local ports.

The combination of those two alternatives would seem to be far superior to what’s being considered, but consideration was apparently ruled out by one inexplicable “screening factor”: “The alternative must ensure reactivation and sustainment of existing Navy infrastructure in a cost effective manner to the Navy.” There was not even a mention of other possible alternatives, such as “Sale of Site to State, Local Agencies or to Commercial Organizations,” also pointed by Arnold in his comments.