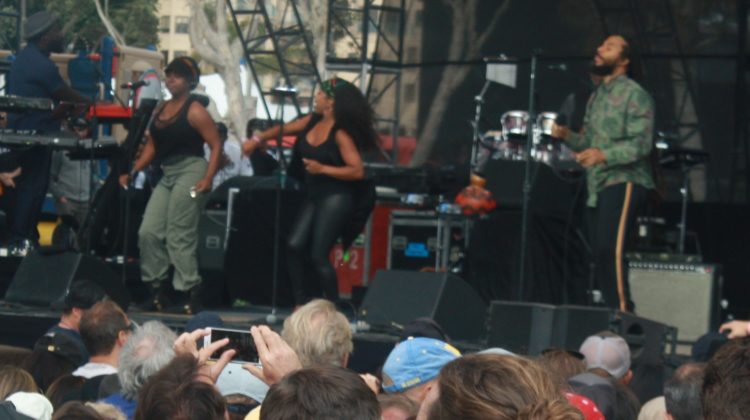 The venue was the waterfront in Redondo Beach on three giant stages, with the ocean as a backdrop. It was organized by local entrepreneurs at the Seaside Lagoon and adjacent parking lot, covered with Astroturf.

This reporter wanted to highlight two of the performers, Ziggy Marley and Willie Nelson because their verses spoke to an energized crowd concerned with the political direction of Washington.

Ziggy Marley, son of famous reggae singer and socialist Bob Marley, led off with his song (and latest album) “Rebellion Rises” with “Everywhere I go rebellion rises…come on people, don’t be fooled… I call on all people to reject the principles of hate.”

And in another song “we are the people not the corporations.  Together we are strong.  They will divide us, to define us to try and neutralize us. They’re talking about work, we’re talking about revolution.”

His lyrics called for justice, not judging a person because of his/her skin color, protesting the “killings of thousands by the rich of the world who start fires, they cannot stop” (I wonder if he is referring to the US perpetual wars in the Middle East and especially Syria, triggering mass exodus of refugees).

And of course, part of his set, to thousands roaring along, Bob Marley’s signature song “Get up, stand up, stand up for your rights” which includes:

Most people think great God will come from the sky Take away ev’rything, and make ev’rybody feel high. But if you know what life is worth You would look for yours on earth

And now you see the light You stand up for your right, yeah!

“Better to die fighting for freedom, than be a prisoner all the days of your life” – Bob Marley

Willie Nelson commanded the largest audience, exhibiting his range as an artist, who has undeniably earned his place in the ranks of American folklore and heritage. His rock/country ballads like “Angel Flying Too Close to the Ground, Whiskey River, Stay All Night, I’ve Got the Time if you’ve Got the Money and On the Road Again” which highlighted his Farm-Aid concerts,  organized to expose the plight of working family farmers caught in debt between the banks and big agribusiness on one side and the low prices paid for their milk, vegetables, wheat, corn, etc.

Started by Willie Nelson, Neil Young and John Mellencamp in 1985 to keep family farmers on the land while there were thousands of farm foreclosures at the time and this trend has accelerated during the past few years as the new wave of Washington imposed tariffs and retaliatory trade agreements with China, Mexico and Cuba severely affect their income.