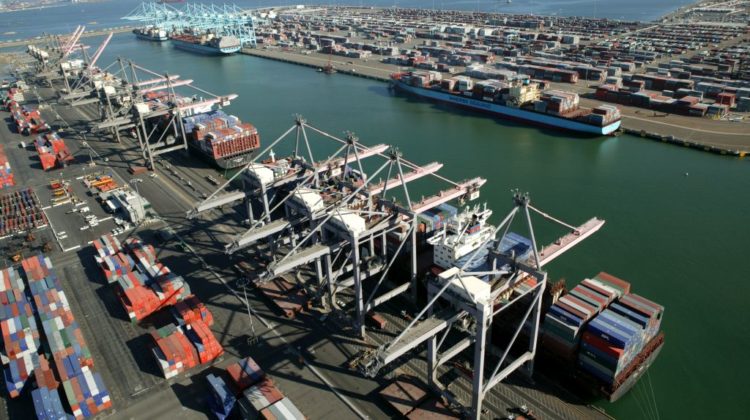 A controversial pollution control system is drawing renewed fire following a closed-door demonstration in early April, as news leaked out about its complete lack of a greenhouse gas component—a key purpose of the overall “Green Omni Terminal” plan of which it is part.

The ShoreCat Vessel Emission Capture System is a product of Clean Air Engineering and Maintenance (CAEM), owned by former Port of LA Board President Nick Tonsich. It’s a copycat of emission capture technology developed by Advanced Cleanup Technologies, Inc., which tested on over 35 ships at the Port of Long Beach from 2008-2012 before POLA first committed to CAEM’s knock-off version. It was integrated into the Pasha Green Terminal plan with the promise of added control of greenhouse gases [GHGs], but following a demonstration at Pasha on April 10, local activists wrote to Governor Gavin Newsom and the head of the California Air Resources Board, Richard Corey, to complain.

“The ShoreCat system actually increases GHGs on the terminal,” said the letter from Jesse Marquez, Executive Director of the Coalition For A Safe Environment and Chuck Hart, President of San Pedro Peninsula Homeowners United, one of the initial China Shipping lawsuit plaintiffs, which is responsible for fundamentally transforming the port’s environmental practices.

“The CAEM ShoreCat ship emissions capture system claimed it would have a GHG component to reduce or eliminate GHGs from the diesel generators used to power the ShoreCat system.   It did not; it does not and now we find out will not ever address GHGs,” the letter said. “This was not allowed under the grant proposal and funding criteria.”

“There is no CO2 or green carbon capture piece that’s part of this,” one source told Random Lengths. When CARB came for the demonstration, “The NOX part of that worked,” the source said. “They used the crane, put it on the vessel and they collected the NOX.”

But there it was more like a proof of concept than anything else, for lack of comprehensive data. There did not appear to be a monitoring of the base emissions, and the test only lasted three hours—a small fraction of the three typical three days in port for one vessel, which in turn might not be representative of other vessels.

In addition, according to a second source, Trimer—who manufactures the capture technology used by CAEM—had advised CARB not to use the data from the test, because the equipment was too new, in its burn-in phase. “It’s like a brand-new engine, its not going to show you its output till it’s all sealed and everything else,” they said. In short, Trimer reportedly said, “There’s data here, but you really shouldn’t use it.” As a result, “Basically, it was a dog and pony show,” entertaining, rather than informative.

But the total testing requirement is also problematic, the source pointed out. “The total amount of hours that thing has to prove itself is 200 hours,” compared to a full year of data for the other project components. That’s slightly less than three full cycles of a ship’s typical 72-hours in port, with no way of accounting for differences between them. “You’re talking three vessels, and you’re saying, ‘Okay, this is it. This is proven.’ To me that that’s just a joke. It’s too little,” the source said.

As for the lack of GHG capture, ShoreCat is only making things worse, according to both sources.

“You’ve now introduced another big generator that’s got a 400- almost 500-gallon fuel tank and is running on the dock and it’s spewing out carbon and now nobody is collecting that,” the first source said. In addition, there’s the crane, which “is also a diesel engine, is putting out carbon. So now you introduce actually two carbon generators… I don’t know how much that helps with carbon emissions when you’ve now introduced two new carbon pieces on the dock.”

Tonsich is still promising that he will come up with a GHG component, but “There’s no date. There’s nothing that’s in the works.”

When Random Lengths asked CARB for confirmation, they implicitly confirmed these accounts. Rather than respond directly, they provided an earlier letter from Corey to Hart, dated April 26.

That letter talks about zero-emissions [GHG] vehicles and equipment separately from its discussion of ShoreCat, which it said “is expected to address the largest source of diesel particulate matter and criteria pollution emissions at the terminal,” so it “is providing additional emission reduction benefits that would not happen otherwise.” There was no discussion of any of the issues raised above, much less an attempt to promote ShoreCat as addressing GHGs.

When Random Lengths News asked POLA for comment, they provided a copy of the same letter.

There are other problems with ShoreCat: it’s bulkier and heavier than promised, so it can’t be moved with existing equipment, requiring the outside hiring of a semi to move it around.  It’s fallen short of its promises repeatedly, but neither CARB nor the port have seen fit to question it, so the questions just keep multiplying.