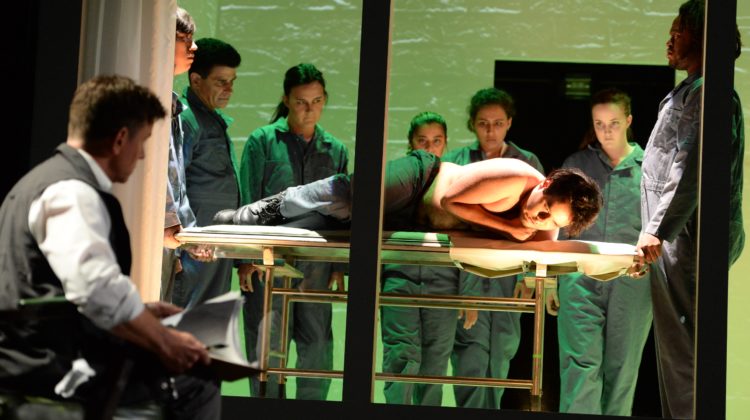 Kafka’s “In the Penal Colony”

Not Quite Able to Deliver on Its Compelling Concept

There is no one like Franz Kafka for dramatizing the cruelty and absurdity seemingly inherent to all forms of authority. Whether we’re talking about the moralistic totalitarian European regimes that are ostensibly the target of his short story “In the Penal Colony” or the unbridled greed of so-called free-market democracies such as the United States, Kafka sees the common people as inevitably consumed by the machine, consumed without ever really knowing how or why.

Staging the Southern California premiere of a Philip Glass work would have been typical Long Beach Opera (they love them some Philip Glass, having performed an additional four of his operas over the last eight seasons), but this time they were hunting bigger game. Partnering with California Repertory, this production of In the Penal Colony augments librettist Rudolph Wurlitzer’s take on Kafka with text by Juliette Carrillo culled from interviews Cal State Long Beach’s Rising Scholars conducted with a host of American prisoners on various aspects of the incarceration experience everything from general descriptions of prison life to meditations on the corporate profit made on the backs of prison labor. 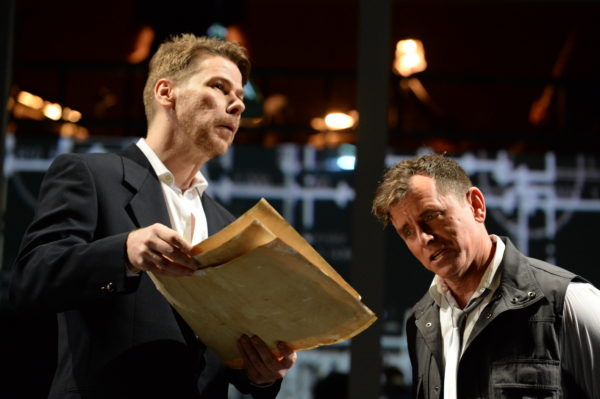 It’s a worthy aim. Unfortunately, the more traditional elements of the opera itself are probably too scant to maximize the payoff of such lofty ambitions.

Following Kafka’s lead, In the Penal Colony has only two singing roles. The Visitor (Doug Jones) has come to an unnamed island penal colony to observe and make a report on a form of execution that has fallen out of favor with society at large. Invented by the colony’s original commander (now deceased), the condemned prisoner is strapped into a machine that, over the course of 12 hours, inscribes his supposed crimes into his skin, eventually killing him without his ever knowing what he was convicted of or why. The Officer (Zeffin Quinn Hollis), a protégé of the old commander, tries to convince the Visitor to report favorably on the process, thus preventing the new commander from doing away with it. 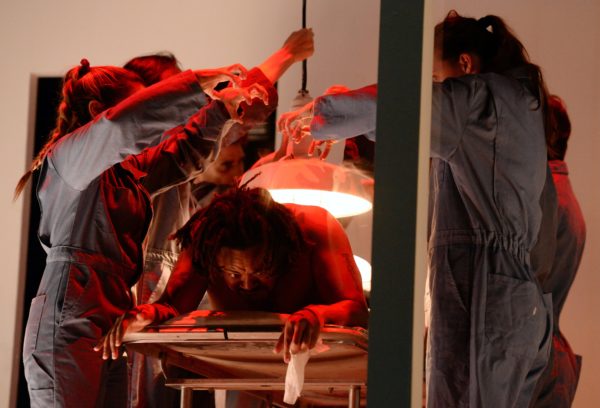 The limited scope of the action two-thirds of the opera is nothing more than the Officer trying to persuade the Visitor combined with Glass’s unvarying score (unvarying even by Philip Glass standards, which is saying something), create a soporific effect. Hollis’s performance is commanding, and Jones is strong (except for one short passage that’s above his range), but compelling vocal lines is not Glass’s forte. At his best, Glass delivers dark, compelling cycles within cycles, musical loops and wheels that turn together and gracefully take you on involuted meditative journeys. But sometimes, as here, it feels like if you’ve heard one Philip Glass work, you’ve heard them all. If you like Glass, you’ll never dislike what he’s doing; it’s just that In the Penal Colony does not stand out from the pack.

Making matters worse is Wurlitzer’s libretto, which is surprisingly weak. There does not seem to be any poetry or stylistic elegance in his words (written in English, so nothing has been lost in translation), and the redundancy of his text becomes a bit tough to take.

The most compelling aspect of this production is the prisoners. Rather than have them sing, director Jeff Janisheski employs an octet of uniformly-clad CSULB students to deliver Carrillo’s text, suffusing Kafka’s shadowy conceit with commentary specific to our own prison industrial complex, with a special attention to the for-profit aspects calling into question why a nation that regards itself as a beacon of freedom is responsible for nearly one-fourth of the world’s prison population even though “the Land of the Free” is home to only 5% of the world’s people.

The prisoners also feature the production’s strongest blocking and scenic elements. The stage is dominated by what is basically a giant terrarium of a cell-cum-execution chamber (fine work by Danila Korogodsky and crew), which undergoes simple but effective transformations via Lily Bartenstein’s video design. Additionally, Martha Carter’s lighting is consistently spot-on. Janisheski maneuvers the prisoners throughout this mise en scène in ways that are most always interesting (although he might have done better with the bits where they double as the execution machine).

The only problem with the prisoners’ words is that they never feel fully integrated into the Kafka story, but rather an interpolation. This lack of integration is reflected in a quote from Kafka scholar Blake Plante printed in the extremely eloquent “dramaturgical notes” in the show’s program: “Kafka warns against the worship of the machine, because ‘no machine, no matter how intricate or refined, can provide the meaning of justice.’ Yet America is on the move to entrust imprisoning more people to those whose primary concern is profit and shareholder return.” Both sentences are true, but nowhere in “In the Penal Colony” is Kafka concerned with the use of the prisoners that Janisheski and company have shoe-horned into this production. In the Kafka (as in Wurlitzer’s libretto), the prisoners exist in the penal colony merely to be punished and obliterated, not as a means to an end.

Truly, the above-mentioned dramaturgical notes make the case LBO/CalRep are trying to make with In the Penal Colony better than the show itself. Reading the notes prior to the performance excellently sets the audience up to ruminate on a tragic perversion of justice that is woven into the fabric of the American penal system dramatized during the ensuing 90 minutes. Unfortunately, the production itself does not do much to augment this rumination.