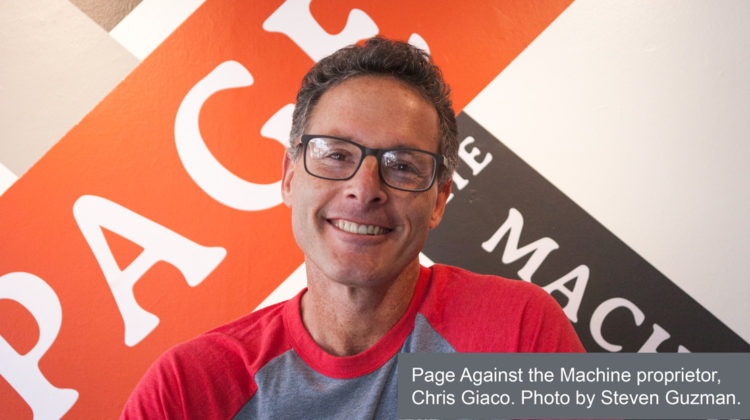 Page Against the Machine on Retro Row, an independent bookstore of power, strength and defiance

Just like its community, Long Beach’s booksellers are interesting and unique and surprisingly plentiful. There are roughly 22 bookstores in town, an amazing number for a population of 470,000 people, 26 percent of them born outside the country, in the era of the internet. Most of those stores specialize in rare and used books, comics and collectibles and graphic novels, scholastic, Christian and sober living titles. By appearances, Long Beach bookstores exist in a specialized ecosystem tailored to particular interests.

Across the national landscape, large corporate book sellers like Borders encroached on independent stores which were closing up shop everywhere. In their wake, online and big book sellers thrived. Amazon became the world’s largest book retailer. And Long Beach’s beloved Acres of Books, the largest and oldest family-owned second-hand bookstore in California, closed in 2008. But after Amazon’s entrance the corporates — the big-box stores and the chains — got crushed. Borders, for instance, went out of business altogether, leaving a gap for the indy bookstores to fill. Book lovers craved the distinctive storefront experience again.

Harvard Business School professor, Ryan Raffaelli, author of the study, Why Independent Bookstores Have Thrived In Spite of Amazon.com. During a recent interview with NPR Raffaelli boiled down his findings:

“The indies represent this high experience, a chance for the consumer to engage on a set of very personal dimensions, versus Amazon, which is really about, can I just get something quickly at the cheapest price?”

Chris Giaco, the newest bookseller on Retro Row, brings that “high experience” to Long Beach with a recently opened shop called Page Against the Machine — Books and Tools For Mass Defiance, Empowerment and Self Reliance! The community’s reaction has been one of enthusiasm and thanks.

Giaco’s store is refreshing in that it reminds you how few physical spaces remain for left-leaning thought. Page Against the Machine is also a curious throwback to a time when communist bookstores proliferated the biblio-landscape. A feature story by Joshua Clark Davis in Jacobin magazine a couple of years ago observed, “As avowed anti capitalists, communists made for unlikely business owners. But as entrepreneurs, their objective was to promote ideology and cover costs, not maximize profits.”

Davis noted that communist bookstores were one of the most important public spaces for Marxism in the United States in the 20th century.

“Most Americans didn’t personally know a communist,” Davis wrote. “Teeming with texts by Marx, Engels, and Lenin, these stores also stocked the Daily Worker and the latest publications by party officials from the United States, the Soviet Union, and other countries around the world.”

Page Against the Machine isn’t a communist bookstore but it does aim to be a place where progressives can push back against the fascist tendencies of these Trumpian times.

Giaco has been in the bookselling business in brick-and-mortar and online since the early 1990s. Originally from New York, Jersey area, Giaco moved to Long Beach in 1996 and helped open Borders Books and Music on Bellflower Blvd. He stayed until the early 2000s.

“Because of the corporate atmosphere, and the store [going] through a series of mergers and buyouts, it really got further away from book selling … and more toward corporate [priorities].” Giaco said. “It didn’t matter anymore if you were a book lover.”

Between 2009 and 2015, the number of independent bookstores nationally grew by 35 percent, according to the American Booksellers Association.

The opening of Page Against the Machine was mentioned in a book trade publication, which resulted in outreach quoting a similar statistic. Independent book sellers are thriving. Barnes & Noble, probably the oldest bookstore franchise on the planet, founded in 1873 and the only store left of the big chains has recently had trouble changing to tailor to bibliophile’s shift back to brick and mortar. It took until 2018 to start its first-ever in-store book club.

“[What] people always overlooked, and we saw this at Borders, it wasn’t just the internet that was killing bookstores,” he said.  “It was the fact that Walmart, Sam’s Club and Target were selling books at 40 or 50 percent off the

price. So again, that’s corporatism running amok, gobbling up everything.”

Giaco decided to create a space that is inspirational and promoted ideas, especially in this time. He can pick and choose every title and asserts that 90 percent of them, “you wouldn’t be able to find at Barnes & Noble if you wanted to.”

“They’re not going to deal with the small radical presses and very independent presses,” he said. “I’m selling new and used, which also opens up so many relevant books from the 60s and time immemorial that still have relevance today.”

“You can go deep,” he said. “Those [other] stores have to appeal to everyone, I don’t have to.” 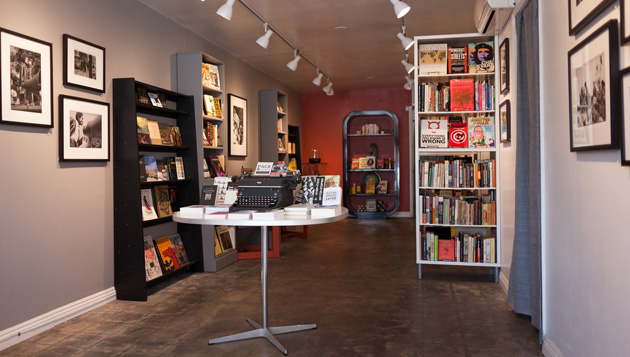 Giaco chose the aesthetic that represents the mission of the store.

“Our side needs to be more forceful about what we stand up for,” he said.  “That’s why there’s this overt nod, in the art work and color pallet, to this constructivist [style]—most associated with the Russian revolution colors.”

“I don’t like to use the word ‘militant,’” he said. “I wanted this store to be fortress-like and exude power and strength, a source of comfort. That’s what this space is for, to provide some inspiration and nourishment to people to join the fight.”

The timing for this type of store, post 2016 election, seems right given the political climate.

Giaco saw the youth were finally engaged in politics and there is renewed activism. He remembered  back in the second Bush presidency thinking the youth weren’t engaged.

Giaco said Long Beach is the right city and California the right state to do this. Page is intended for people who are against the grain and are iconoclastic thinkers … people who don’t want to do things traditionally.

Giaco pauses as he searches for the appropriate word. “I know the word ‘fascism’ is overused, but when you read the textbook definition of it … we are creeping towards that and people need to wake up and be on guard.”

Page Against the Machine is Giaco’s small contribution to the fight.

“[Creeping fascism] almost has seeped into everything and it affects people’s moods,” he said. “I found myself in this almost schizophrenic space of anger and powerlessness and not knowing what to do…. When I’m putting the store together it’s equal parts anger and inspirational and hopeful. We have to all tread that line so we are not driven crazy…”

He isn’t confident  that the 2020 election will change anything. He says if it happened today Trump might be reelected.

“It’s stunning. It seems so overt and I don’t know what people are attracted to. This phase that we are in weighs you down.”

Giaco said he doesn’t ever want to mention Trump’s name and wishes the news or media or even the late-night shows would take a week off  from it — and his tweeting.

Of course, this raises the issue of censorship and free speech. Regarding the recent Facebook bans on Louis Farrakhan and Alex Jones, Giaco said either we have free speech, or we don’t. You don’t have to like it, but the answer is just battling back and making a counter argument.

He noted those “unpopular [white supremacy] marches” and how there was just almost one in Long Beach saying, you can’t decide who to ban. It seems like almost everyone is offensive to someone else.

Giaco pointed to an  exhibit he has in  his store —1960s protest and civil rights photographs.  “It’s stunning how we still must fight,” he said. “The same things are going on in slightly different forms. They may not turn fire hoses on black people in the south who are going to vote now but they keep them from voting through voter suppression.” 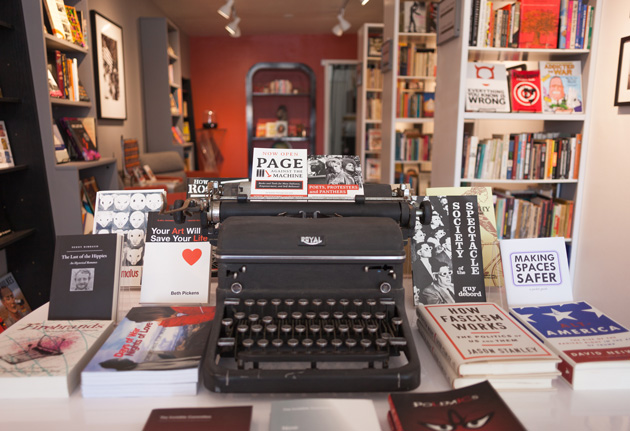 A local vibe with humor and philosophy

“Long Beach and San Pedro are the perfect cities,” Giaco said. “The surrounding areas are full of creative interesting people and there’s plenty of stores that are doing their bit. They do it as a sideline, but I want to do it as a primary focus for the store to make this community space for it.”

“From the first reading event, I can see I want to do things on a bigger scale and I’m really encouraged by the support. It’s perfect leading into the 2020 election.”

The mix of titles is something he wanted to distinguish this store from another bookstore. But Page does not just carry books on overt politics. The overriding concern is more socially conscious or mindful. There is a children’s section and Giaco made sure he has a humor section, which he thinks is important. The section is made up of humorists who have a social message, whether it’s Doonesbury, George Carlin or Lenny Bruce. The philosophy and religion section is not dogmatic or preachy, it’s objective. It contains more mythology and creation myths where “people can see there are other ways of processing things that we were taught in traditional education.”

Page had its first event on April’s Fourth Fridays with two local poets and a local photographer. Author readings and open mics are being planned. Giaco’s challenge will be to get authors that fit in the store. He’s going to have a dedicated local interest section and wants to host both Long Beach and San Pedro poets, writers and musicians.

Giaco likes the independent scene in Long Beach, saying people tend to work together and cooperatively. They don’t view anyone else as competition.

“We all recognize the value of our small stores and what we can contribute,” he said. “We all have a slightly different focus and we all work together.” 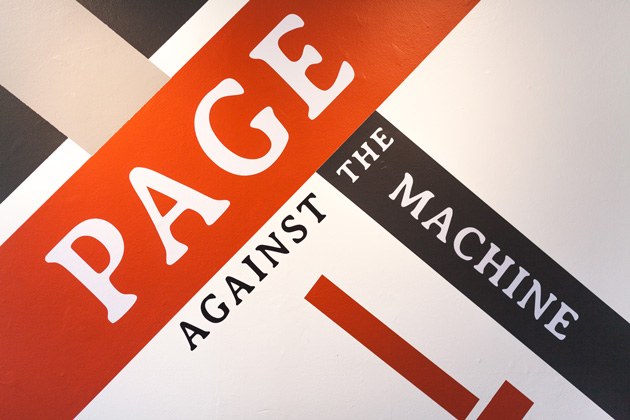