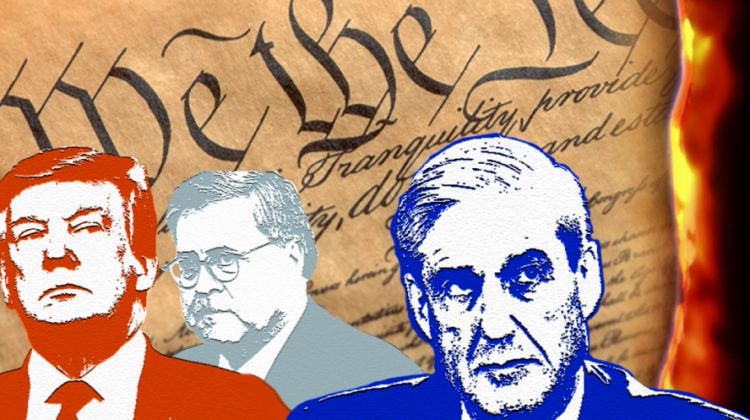 “No person in this country is so high that he is above the law.”

For two years, Trump has insisted there was “No collusion!” between Russia and his campaign, but that claim was actually refuted by the Mueller Report, which also detailed multiple cases of obstruction of justice. Now he’s doing everything he can to block congressional investigations and hearings that could publicly expose his lies — and that’s only part of what he’s trying to block from public knowledge, and how he’s trying to undermine democracy.

On May 9, Speaker of the House of Representatives Nancy Pelosi said she agreed with House Judiciary Committee Chair Jerrold Nadler that the country was in a constitutional crisis. But that could prove to be an understatement, according to some — especially if Trump-selected Supreme Court justices support his efforts to obstruct congressional oversight and grab more power for himself.

“I do agree with Chairman Nadler, because the administration has decided that they are not going to honor their oath of office,” Pelosi said at her weekly press conference. The oath commits the President to “preserve, protect and defend the Constitution of the United States,” which includes the “take care” clause—that the President “shall take Care that the Laws be faithfully executed.”

Nadler had defined the constitutional crisis more precisely. “We are in one because the President is disobeying the law, is refusing all information to Congress,” he said. “For him to come out and say he’s going to oppose all subpoenas, that’s a direct challenge to having a Congress that can function,” Nadler said. “It’s a direct assertion that he wants to be a monarch.”

The focus has been Trump’s attempt to shut down any congressional followup to the Mueller Report, which — despite all GOP spin to the contrary — contains damning information about Trump’s willingness to collaborate with Russia during the 2016 elections and to obstruct justice in the aftermath. But the obstruction of congressional oversight is much broader than that, including Trump’s taxes and finances, immigration policies, health care and more.

Obstruction and collusion in the Mueller Report

“We applied the framework of conspiracy law, not the concept of ‘collusion,’ the Mueller Report stated, and it found both “sweeping and systematic” Russian interference and “numerous links between the Russian government and the Trump Campaign.”

On April 29, Ryan Goodman, former Special Counsel to the Department of Defense, posted a  Guide to the Mueller Report’s Findings on ‘Collusion.’

“The redacted Mueller Report documents a series of activities that show strong evidence of collusion,” Goodman wrote. “Or, more precisely, it provides significant evidence that Trump Campaign associates coordinated with, cooperated with, encouraged, or gave support to the Russia/WikiLeaks election interference activities.” He discussed in detail 14 specific areas of collusion, including sharing internal polling data and information on battleground states with a Russian spy, working with the Russian spy on a pro-Russia “peace” plan for Ukraine, encouraging Russian military hackers to target Hillary Clinton’s personal office, receiving a preview of the Russian plan to distribute stolen emails, brokering a secret deal for a Trump Tower Moscow project directly involving Putin’s inner circle, and more.

None of this involved provable crimes of conspiracy—a much more stringent standard—in part because there was active obstruction of Mueller’s investigation, both by the Russian government and by Trump campaign officials and associates. But collusion—working in concert toward a common end—certainly did occur on multiple fronts.

Regarding obstruction, a bipartisan group of over 800 former federal prosecutors has signed a letter stating that “the conduct of President Trump described in Special Counsel Robert Mueller’s report would, in the case of any other person not covered by the Office of Legal Counsel policy against indicting a sitting President, result in multiple felony charges for obstruction of justice.”

According to the prosecutors’ letter, “acts that satisfy all of the elements for an obstruction charge” include:

So both collusion and obstruction of justice occurred. And Trump is doing everything possible to prevent the public from getting any sort of clear picture of what actually occurred. That is the essence of what he’s trying to obstruct—public understanding and justice.

But the crisis is both much broader and deeper than that.

As noted in a May 11 Washington Post story, “Trump and his allies are working to block more than 20 separate investigations by Democrats,” according to the Post’s own analysis. “All told, House Democrats say the Trump administration has failed to respond to or comply with at least 79 requests for documents or other information,” the Post reported.

That’s part of the broader oversight responsibilities assigned to congress, “spanning issues such as the hurricane-recovery effort in Puerto Rico, the administration’s abandoned family separation policy at the border and Trump’s attempt to build a border wall without congressional approval,”— the last violating the constitutional provision that all government funding originate in the House of Representatives.

Beyond the direct clashes are broader oversight concerns. “The Energy and Commerce Committee, for instance, has sent out more than 30 oversight requests to agencies that are responsible for health, environment and consumer protection issues, with varying levels of response,” the Post noted.  Non-compliance has become the rule under Trump, rather than a rare exception, turning routine congressional oversight—a core responsibility—into a continuous battle.

Worst of all are Trump’s efforts to hide his finances—from suing to prevent his accounting firm from responding to a congressional subpoena to preventing the IRS from turning over his tax records to the House Ways and Means Committee, as required by a 1924 law. That law was passed in the wake of the Teapot Dome Scandal, the most sweeping executive branch financial scandal prior to Trump’s election. It has never been ignored or challenged in almost a century since.

Some have argued that talk of a “constitutional crisis” is overblown. For example, Jed Shugerman, a Fordham Law professor, told Slate’s Dahlia Lithwick that it’s not a constitutional crisis “because the Constitution is still functioning as designed, in terms of separation of powers.” It wouldn’t  become one until Trump or the Congress “bypasses the courts or defies the courts.”

This describes what’s happening now: Impeachment is called for in light of the Mueller Report,  and Mueller placed things clearly in congressional hands, ending his report’s narrative with the quotation, “No person in this country is so high that he is above the law,” and a citation to U.S. v. Nixon.  But Republicans—fearing Trump—are unwilling to even consider looking at the facts of the matter—or, if they can help it, allowing the American people to see them all spelled out. Indeed, their strategy is to cast Congress doing its job as an outrageous partisan attack.

But we actually entered a state of crisis much earlier than that, according to Neal Katyal, acting solicitor general in the Obama administration. “We were in a constitutional crisis from the moment of the election, having a leader who has contempt for his constitutional duty to take care that the law be faithfully executed,” Katyal told Lithwick.

He’s hardly the first to make this argument. Even before Trump was inaugurated, Lawfare’s managing editor, Quinta Jurecic argued that Trump was a classic bullshitter, as described in Harry Frankfurt’s classic, On Bullshit, one who is “indifferent to how things really are,” a much more profound disconnect from truth than that of a deliberate liar.

Having told more than 10,000 lies since taking office—some repeated dozens, even hundreds of times, and sometimes contradicting one another — there can be no doubt that Trump did not stop being a bullshitter. He doesn’t take truth-telling seriously, and thus cannot take seriously his most fundamental oath as President.

This obvious truth has been staring us in the face throughout Trump’s time in office, but it’s been politically impossible to act on it, making it a classic example of a constitutional crisis.