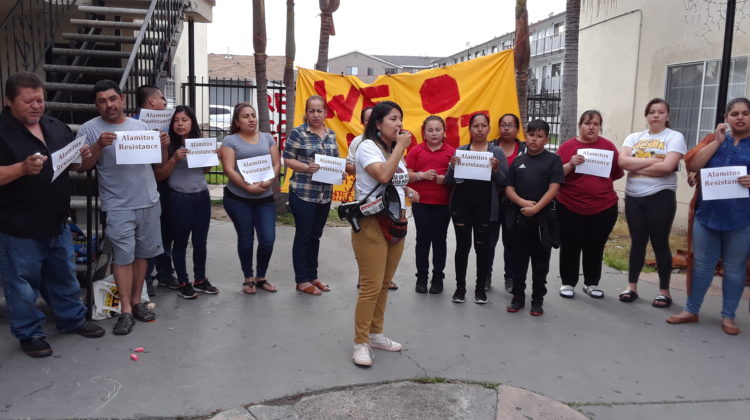 Not waiting for the Long Beach City Council to pass legislation that would force landlords to pay relocation fees to tenants evicted without just cause, one company gave its tenants a Faustian choice: Move out before April 19, less than a month after the notices were sent, and receive $1,000. Or, move out within 60 days and receive nothing. With both options, the landlords expected the tenants to continue to pay rent.

Turnstone Capital, landlords of a two-building, 20-unit complex on Alamitos Avenue in Long Beach, sent eviction notices March 21 to each tenant. Housing advocates believe the landlords did this so they would not have to pay relocation fees.

“Once the ordinance is signed, the landlord would have to tell these tenants why they’re being kicked out,” said Josh Butler, executive director of Housing Long Beach. “We see this as a way the landlord is trying to get out of having to pay these folks relocation assistance.”

Phan Property Management listed the complex for $4.2 million this past February, but the price was dropped to $4 million four days later. Phan sold the property to Turnstone in March.

The buildings are in poor condition. They have mold, rats, cockroaches. The tenants have sent letters to management asking for repairs but management responds slowly, said Brisslisset Hernandez, a tenant of the complex.

“It’s OK, for the amount we pay, but they were kind of like slumlords,” said Vanessa Aguire, another tenant. “I mean, look at the wall. They’re nasty, they don’t really take care [of] what they’re supposed to. But it’s something I was able to afford.”

Many tenants did not complain because they were afraid of being evicted.

Despite the conditions, Phan spent an average of $252,000 in alterations every year for the past decade before selling the property, according to property tax records.

“The old property [owners], they didn’t give us a heads up that they were selling the property so we could be already ready for it,” said Alexis Ramirez, Aguire’s husband. “The new owners come and they gave us a 60-day notice out of nowhere to leave.”

Hernandez expressed a similar sentiment, she would have saved money if she had known earlier.

“The reality is yes, they will have to move because majority of the time, these companies don’t want to keep these tenants,” Lopez said. “They want to beautify the building and then raise the rents and bring in a new class.”

Cynthia Macias, president of the Board of Housing Long Beach, said this practice is common in Long Beach. She has seen landlords evict tenants, paint the buildings and significantly increase the rent for the next group of tenants.

On April 2, the Long Beach City Council advanced a proposal to make landlords pay relocation fees to tenants who are squeezed out after rent increases of more than 10 percent in a year, or who are evicted without just cause. Since the proposal has not yet become law the landlords can evict the tenants without penalties.

Maria Lopez, director of community organizing for Housing Long Beach, said tenants were given a choice between two unsavory options: either they move out before April 19, less than a month after the notices were given and receive $1,000, or move out within 60 days and receive nothing. Lopez said the landlords expected the tenants to continue to pay rent with both options.

“The sad part is that all of these are working families, with over 12 kids in the building,” Lopez said. “These families can’t ever, in Long Beach reality, move with a thousand dollars.”

In response, the tenants went on a rent strike. They demanded 90 days to move and “realistic relocation assistance.” Less than a week later, the landlords sent 3-day notices to pay rent or leave.

Brisslisset Hernandez, a tenant, had no idea on where to go next.

“We just think it’s impossible how we’re getting kicked out in 60 days and yet they want us to pay rent,” Hernandez said. “How are you going to pay two months of rent and still have money to make a deposit and pay another new apartment?”

The eviction notice and 30-day notice came from Turnstone Capital, and included contact information for the manager of the property. However, the manager did not answer or return Hernandez’s phone calls, or respond to this paper’s inquiries.

Tenants will not have an easy time finding housing in Long Beach. Most are families in need of two-bedroom apartments.

“The rents are crazy anywhere, you’re going to need a minimum of five grand,” Macias said. “These people are already working two to three jobs, paying more than 60 percent of their income to rent.”

The Long Beach Housing Board and tenants have not discussed the possibility of staying in the buildings, Lopez said.

“The discussion is really one-sided,” Lopez said. “We’re usually forced to make decisions with the least amount of communication from landlords. That’s really the problem, that we want to promote healthy, transparent communication for what these families are living and need, and the landlords are just flipping buildings, and not really ever here.”

Managers she has spoken with are usually unable to answer her questions and tell her to speak to the landlord. “And where’s the landlord? We never find the landlord,” Lopez asked.

Lopez sent a letter to the agent that sent the eviction notices at the beginning of April. The letter was sent back to Lopez a week later, as no one was present to sign for it.