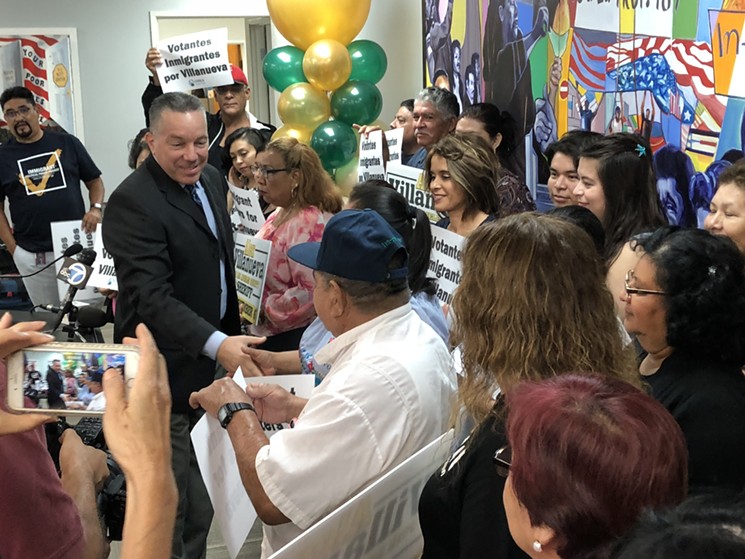 For much of the nearly six months since Alex Villanueva was elected sheriff of Los Angeles County, he’s been embroiled in controversy, primarily regarding several personnel actions. On Tuesday, April 23, he fought back against the criticism while conducting a town hall meeting in Carson — the first of several town halls scheduled in the communities his department serves.

“It’s due process. Someone asked, is this the hill you want to die on? I said, yes,” he responded, resorting to a military expression.

Villanueva spoke to Random Lengths News shortly before last November’s election, he accused his opponent, then-sheriff Jim McDonnell, of terminating employees first and asking questions later. “In so doing he’s wracked with wrongful termination suits, just like he did in Long Beach [McDonnell was formerly the Long Beach police chief] on a much bigger scale.”

Shortly after Villanueva became sheriff, several deputies fired under McDonnell’s administration were rehired or reinstated — and even which term applies to those personnel actions has been a subject of controversy. One, Caren Carl Mondoyan, was fired in connection with alleged domestic abuse. Another, Michael Courtial, was fired over an excessive-force incident.

Villanueva has stated to the press on multiple occasions that 68 more deputies’ termination cases are being reviewed.

The county, and its board of supervisors, took Villanueva to court in March over whether he had the authority to put Mondoyan back on the job. The county’s lawyers also questioned the legality of the Truth and Reconciliation Commission the new sheriff formed to re-evaluate terminations under revised guidelines. In March, the court declined to issue an injunction to stop Mondoyan from carrying a badge and gun, and drawing pay. The next court action on the case is scheduled for late June.

At the Carson town hall, in response to this reporter’s question, Villanueva said, going back at least 10 years, “the organization [the department] went off the rails” and “internal processes” were compromised.

“I’m stuck picking my way through the rubble. My predecessor didn’t resolve the issue,” he said.

Villanueva said that if an internal affairs investigation was compromised, then an employee who was terminated could sue and collect—taxpayers’ money. There is an excess of 100 such cases in superior court.

He charged that under the previous administration, witnesses were under a “gag order,” in which they risked “undermining the department” if they testified “truthfully” to the Civil Service Commission. He has rescinded that gag order.

He said he directed his division chiefs to go through all termination cases, and although there were some good decisions, there were also some “stinkers” that “we gotta deal with for the next two or three years.”

He said of the two termination cases the county and press criticized, “exculpatory evidence was knowingly concealed” so “we cut our losses” by putting the deputies back on the job, rather than go through a lengthy court battle.

“If you fired them properly, they’re not coming back,” he assured the audience. “I’ve already terminated 16 employees [for] DUI, domestic violence, etc. It’s just part of the job.”

Villanueva did not make a formal speech. Instead he spent roughly 90 minutes responding to more than a dozen questions from the floor. Most were submitted via cards, but some audience members simply shouted questions. Besides the controversial personnel issues, topics addressed included homelessness and cannabis enforcement.

Responding to a question concerning marijuana dispensaries in unincorporated Harbor Gateway, Villanueva said policies are still being defined. “We’re trying to get rid of the black market but protect legal operations,” Villanueva said. “The black market is trying to take out legal ones. If you think one’s going on, report it to the sheriff.”

Several questions about homelessness were addressed in a single response. Villanueva introduced Lt. Jeff Dietrich, who supervises the homeless outreach services team. Dietrich said the department is adding more deputies to deal with homelessness, and Carson is the only station that has two deputies assigned to the team.

Dietrich also said that as of 2018, Carson had 481 homeless persons, with two-thirds of them living in vehicles.

Lyn Jensen has been a freelance journalist in southern California since the 80s. Her byline has appeared in the Los Angeles Times, the Orange County Register, the Los Angeles Weekly, the Los Angeles Reader, Music Connection, Bloglandia, Senior Reporter, and many other periodicals. She blogs about music, manga, and more at lynjensen.blogspot.com and she graduated from UCLA with a major in Theater Arts. Follow her on Twitter, LinkedIn, or Facebook.