Construction is Planned on the... 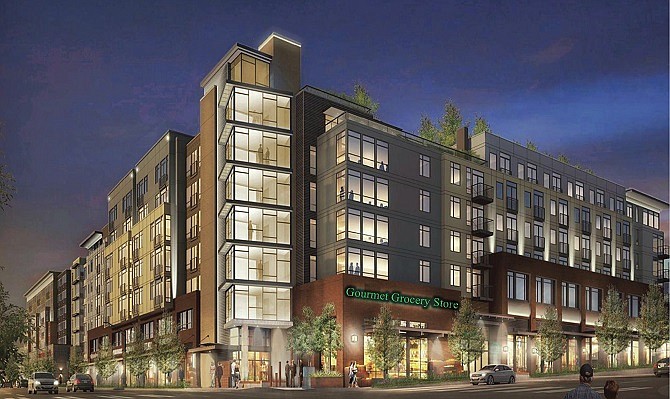 At the April 9 meeting of the San Pedro Chamber of Commerce, Genton Cockrum Partners presented preliminary designs for an apartment complex with commercial space at the site of the former San Pedro Courthouse.

Genton Cockrum Partners plans to demolish the former San Pedro courthouse and build a six-story mixed-use housing complex with 263 units and commercial space on the first floor. The firm expects to have final plans in two or three months.

A committee formed by the Los Angeles County’s Department of Public Works chose Genton Cockrum to build the complex on Dec. 18, 2018. The county agreed to a six-month exclusive negotiation agreement with Genton Cockrum. During this time Genton Cockrum is required to create designs for the project and secure permits with its own funding.

Eleven percent of the 263 units are reserved for affordable housing, meaning that tenants will pay 30 percent or less of their income on rent. The ground floor has 18,000 square feet of commercial retail space, which will likely be used for a grocery store. The complex will have four retail parking spaces for every 1,000 square feet of commercial space.

The American Federation of Labor and Congress of Industrial Organizations Housing Investment Trust will fund 75 percent of the project, but not until the project is finalized. Private investors involved with Genton Cockrum currently fund it.

The project has a Proposed Labor Agreement, but it is not finalized, said Fred Cravea, project manager for the county.

Construction could begin in 12 to 18 months, depending on the permitting process, Cravea said. If the current plans meet zoning requirements construction will begin sooner.

Los Angeles County purchased the majority of the property from the state for $5 million and invested $500,000 in the project, Cravea said.