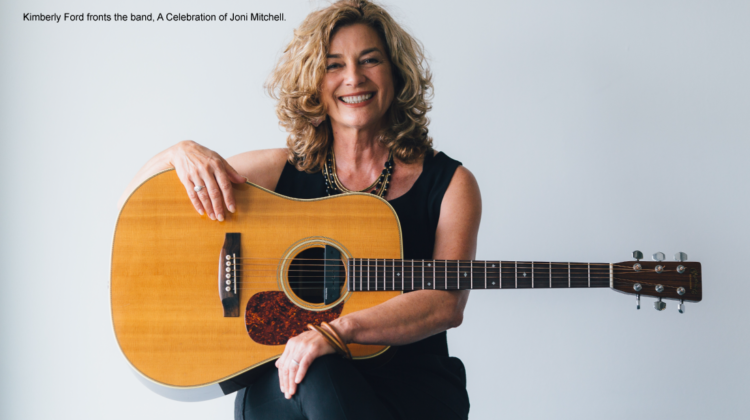 Joni Mitchell’s music is timeless. Her music is more relevant now than ever. Her 1971 album Blue topped NPR’s 150 Greatest Albums by Women in 2017. Mitchell celebrated her 75th birthday with a gala at the Dorothy Chandler Pavilion in Los Angeles this past November, memorialized in a documentary that screened nationwide in February.  In May, Mitchell’s home country of Canada will celebrate the 10th anniversary of the collaborative ballet, Fiddle and Drum — Mitchell’s 1969 song from Clouds set to movement by choreographer Jean Grand-Maître. Mitchell described the ballet as “the most satisfying project of my career.”

Closer to home, A Celebration of Joni Mitchell comes to San Pedro’s Grand Annex May 11. The seven-piece band, featuring Kimberly Ford has just come off several successful tours in Northern California including a stop at Yoshi’s Oakland. This will be the band’s first concert in Southern California, which prefaces another great first for the band, which is on schedule to play the Kennedy Center in the fall.

A Celebration of Joni Mitchell features Kimberly Ford, vocals and guitar, George Friedenthal on keys; Lee Rollag on guitar; Tom Buckner on saxophone; Tom Etchart on bass, and Charles Levin on drums. Ford draws on Mitchell’s four-decade-plus canon of songs, with a focus on her early years through 1980, including Big Yellow Taxi, Both Sides Now and Woodstock. Other numbers include Free Man in Paris, Court and Spark, You Turn Me On, I’m a Radio and River.

Before the Grand Annex concert RLN spoke to Ford who has an impressive music and education background of her own— and she is gifted at reaching the same tones as Mitchell. She works as a clinician with the Santa Barbara Vocal Jazz Foundation and co-directs the Santa Barbara Jazz Workshop. She serves on the vocal faculty of the Northwoods Jazz Camp in Wisconsin and hosts the monthly Santa Barbara Jazz Jam.

Coming of age a generation after her debut, I wasn’t deeply acquainted with Mitchell’s music, though certainly familiar. But in preparing to write this story— listening extensively to her music, I was struck by two things. First, I felt as though I had found a new friend. There is an inner peace translated in Mitchell’s music that spoke to me. An emotional familiarity connected. Arriving at this new depth, I wasn’t certain if it was the music, the lyrics or the combination thereof.

I aimed to discover from Ford how she applies these sensations, if you will, with her musical education and her work. Ford has clearly mastered Mitchell’s sound, no small feat, within her own sound. She isn’t mimicking her. She channels her. I wanted to know how Ford described this so-called healing, based on what she studied with Mitchell’s music.

Ford, who was playing guitar and singing when Blue came out, learned all of Mitchell’s work, especially her early releases.

“I was lucky that I was hearing a lot of [her music] back then,” Ford said. “Blue [came] out and it so articulated my experience then as a young woman. I devoured it. That was my training ground.”

Ford noted she goes out of her way to explain these ideas about Mitchell’s healing music, adding “but [then] nobody comes to it on their own—it’s true.” She got it early on, calling herself one of the lucky ones.

“We all have that period in our lives when we are reaching out, that developmental angst and we’re looking for something … for somebody to understand us somehow,” Ford said.

Ford described Mitchell’s lyrics as clean, not about herself, it’s her observations and they’re accurate. They are not self-indulgent. Ford explained, “when we go here, … it’s a little hard to articulate.” But that’s the impact Mitchell’s songs have on her, “like little truths about the human experience,” Ford said.

That’s what Mitchell has given her life too and it sculpted how Ford approached singing and a lot of music.

In time, Ford found other avenues of music, settling in with jazz. She still added Mitchell’s work to her repertoire because it was so fantastic. But there was much work to be done within jazz and depth to explore and improvisation. When Ford’s drummer, Charles Levin, brought up the idea to perform Mitchell’s music, she was curious. The two had just met after performing a gig together where Ford played Mitchell’s Woodstock.

They organized a very successful performance, selling out the first night. They realized that this was meaningful to people. Now, in the five years that the band’s been together and they’ve had remarkable experiences.

Ford has spent 20 years studying jazz and jazz voice. Because of that and her early start, understanding how Mitchell “moved and expressed things with her voice,” is how she can perform her music now. She had that foundational experience with Mitchell and then worked in jazz voice afterward.

“Some things are important to say,” Ford said. “I do toning work—an ancient healing modality. That’s the other part of my work that I do when I teach.”

“I can tell that the combination of notes that Mitchell puts together, I know from that other perspective, that it really is healing,” Ford said. It’s good medicine.”

The other part is Mitchell’s tunings. Ford said she is responsible for about 53 different tunings on the guitar and they’re not normal. She tuned every string differently until she came up with a sound, like a sound bed with a tuning that expressed how she felt. They are all unusual and unique. That’s why when you hear that first cord of a Joni Mitchell song, you go somewhere.

“It’s not just a fluke that you remember,” she said. “You feel when you hear that. On top of that, she would lay her lyrics and her guitar work and her voice. It’s all part of the healing element of what she does. It’s also why her music is so difficult to play.”

When  Ford works every day, it’s some deep therapy that takes her to a whole other place. It has made her a “more mindful person [and] deepened her as a person and an artist.” 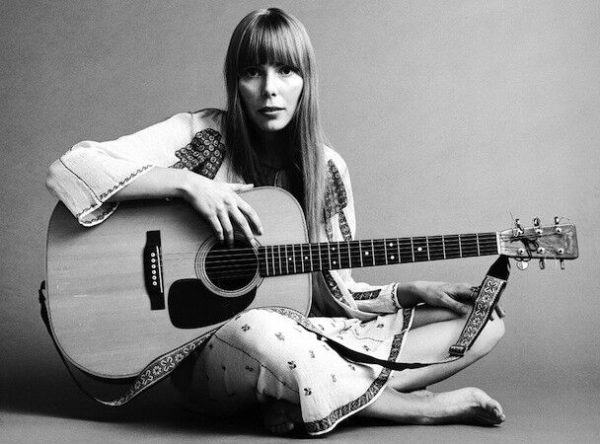 She has many favorites among Mitchell’s 22 album catalog but two stand out for her, For the Roses, and Hijera. The song Hijera “moves her and speaks to her gypsy soul.”

“Mitchell wrote For the Roses when she was just throwing in the towel,” Ford said. “She’d had it with the music industry early on and realized it was a little cutthroat. It was ruthless for a sensitive woman, especially back then. I even had to fight my way through as a woman but nothing like what she went through.”

Mitchell never sacrificed her personal growth for the music industry, but she paid a big price for it. She fell out of favor with the industry and a part of her fan base, but the work is remarkable. With Ford’s jazz background, she’s listened to how Mitchell went from where she was as a folk, pop artist into jazz. Then later, she went into an orchestral place with some later work.

With A Celebration of Joni Mitchell, Ford was insistent that everybody learned the material the way Mitchell wrote it. She didn’t want to take liberties with the music too early.

They’ve been true to the sound but are beginning to take liberties, now that they really understand the music. They play different instruments not traditionally in Mitchell’s music, for instance, on Fiddle and the Drum, which Mitchell performed a cappella back in the day.

“It says so much about our political climate which I can’t go too deeply into on stage, but I can sing about it.” Ford said. “We open our second set with that song and then go crashing into an Irish jig from there, which I don’t think Joni ever did,” she quipped.

Ford plays a mandolin, the guitarist plays fiddle, the saxophonist also plays flute and they all switch instruments going with the theme of the song…about war and peace. They turned Carey [from Blue] into a second line song, like a New Orleans blues. While they’re taking some liberties they try to be respectful of the music as it was written.

“We absolutely play the songs people are most familiar with, but I also feel it’s important to have a good solid handful of the work very few people, unless they are a ‘Joni-a-file’ have heard.”

They are keeping the torch high with Mitchell’s works, educating people about other aspects of her talent that haven’t come to light. It’s a way to make it public on Mitchell’s behalf.

“It’s a great project and we have a lot brewing with wonderful venues to come,” Ford said. “People have been receptive to what we’re doing. Onward and upward. Each song is like its own universe.”