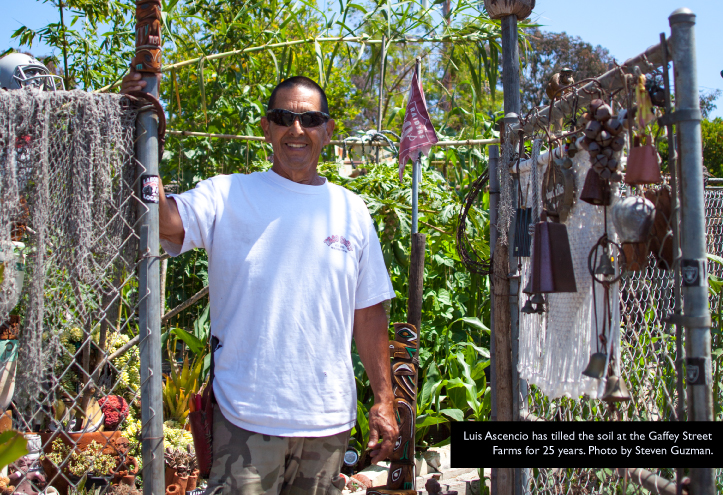 Over the past 50 years, the 300 community farm plots on North Gaffey Street in San Pedro have been an institution and a source of food and exercise for thousands of residents. Today, the urban farmers who coax nourishment from this land are battling the city of Los Angeles to retain the right to farm produce as they have for generations.

The city is proposing to shut down the farms for a year to replace faulty water piping. The plots have had access to free recycled water for decades, but these urban farmers would be paying for future water supply through water meters linked to communal plots.

“We are finally getting fruit.  All my plants will die under the proposed closure,” Lourdes Ortiz, one of the farmers, complained to Random Lengths News.  “Besides, I give away most of my fruit. My mom only gets $300 a month Social Security, so she can’t afford the new proposals.”

Nearly 100 urban farmers attended an organizing meeting and rally to save their gardens April 25.

“Up until recently, the farmers received receipts from the organization’s treasurer,” explained Luis Ascencio, a community gardener for 25 years and long-time Gardeners Association president. “But now, we pay $50 in cash with no receipts. Previously, the money was diverted back to the farmers. Now we wonder where that money is going.”

Other farmers explained that these gardens sit atop oil pipelines and that if water was cut off for a year, all of the vegetation would die.

“This area would become a fire hazard,” said one of the potentially displaced gardeners, David Vigueras. “This garden is really like a park. It absorbs a lot of CO2 coming from the port and it is also a migration route for birds in search of roosting areas and food.”

All of the farmers were vocal in their opposition to the garden’s closure.

“People have been here for many years and it is not right to close and reopen,” added Edgar Esparza. “We are afraid the city might not allow us to come back, or the price we would pay for recycled water, which cannot be sold, anyway, will be so high that we cannot afford to return.”

The city-appointed community gardens president, Carlos Aguilar, increased plot rental rates to $50 per year in 2014. Under prior administrations, which were elected by the Gardener’s Association, plot rental rates were $20. Aguilar supports the city of LA closure attempts.

“We used to have water 24 hours a day. So we’d come and water anytime,” Esparza said. “Now water exists for only three to four hours and with 100 people trying to access it simultaneously, that is a problem.”

“Farmers would lose up to $100 per month if they were to buy the equivalent foods from a market,” José Miramontes, a 38-year urban farmer, told RLn.

“For many people, this is their life,” gardener Antonia Fereraza agreed.

Some suspected an outside company was interested in the land and the city’s announced plan to install new pipes was a pretext for removing the farmers. Farmers added that they would willingly work for free to install pipes in the 20 percent of plots that need them to increase water flow.

“We would labor for our land as we have for generations,” another added.

Port of Los Angeles High School teacher and founder of the school’s Green Festival, Rachel Bruhnke, attended the organizing meeting at the North Gaffey garden along with half a dozen students.

“We are here to support you,” Bruhnke told the farmers. “The way forward is more urban gardening. We cannot allow this garden to close, like the 2006 community gardens closure in South Central [Los Angeles].”

They claim that public notices calling for a meeting on March 3 weren’t timely or adequately posted. The gardeners allege the notices went up around Feb 19 and did not explicitly explain that the meeting was to discuss the garden’s closure. Under public pressure, the city has agreed to a temporary closure suspension of August 1 from the original April 1.

Buscaino’s office, which is spearheading garden closure, was contacted multiple times over several days by phone and e-mail but would not comment   or answer  any questions posed by Random Lengths News for this article.