A March of Her Own 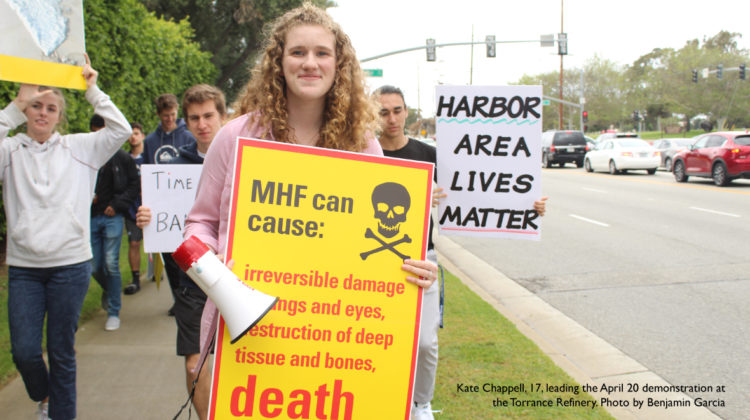 A March of Her Own

As every fortunate teacher and student knows, the most valuable assignments are the ones that teach us about ourselves. It’s a lesson Chadwick School senior, Kate Chappell, learned the loud way in front of the Torrance Refinery on a recent Saturday morning.

Hey, hey. Ho, ho. MHF has got to go,” the 17-year-old yelled into her megaphone on April 20, as she led a large group protesting the use of toxic modified hydrofluoric acid, MHF, in two facilities in the South Bay. The Torrance Refinery and the Valero Wilmington Refinery are the last two refineries in all of California where this dangerous chemical is still in use.

Chappell said that what had begun as a class research project on local environmental hazards quickly grew into a crash course in civil engagement. She has been a passionate advocate for a phase-out of MHF for the health and safety of the community since learning about a near catastrophic event, which occurred at the refinery in 2015. On the morning of Feb. 18, an explosion tore through the facility and launched a heavy piece of equipment within feet of the highly-toxic MHF tank. If debris from the explosion had struck the tank, 50,000 residents and their children at 22 schools — an area from the west side of the refinery to the beach — could have been injured or killed.

Confirming the scope of the potentially deadly disaster six months later Cal/OSHA fined then-owners, Exxon Mobil, $566,600 with 19 separate citations. Among these, 18 were classified as “serious” or “willful” because the oil behemoth had either failed to eliminate known hazardous conditions or was intentionally non-compliant with state safety standards.

“It was really startling to me to discover that when I was a 13-year-old 8th grader there had been such a potentially lethal incident so dangerously close and I had not even known.” Chappell notes recalling the start of the four-year journey that brought her to the front of the large group of protesters marching down 190th Street on April 20th.

Initially, Chappell began attending bimonthly meetings of  the Torrance Refinery Action Alliance (TRAA) as part of her ongoing environmental science class assignment. But today, she credits this grassroots organization of residents and business owners who live or work in neighborhoods surrounding the Torrance and Wilmington refineries with igniting her growing commitment to environmental justice.

“I had no idea there was so much activism going on in Torrance. I had always thought that being involved was the same as being informed. But the more involved I became, the more I began to realize that I could make a difference by stepping up. I had never participated in any kind of protest before. Having the opportunity to be out in front of it and leading it was so cool.”

Kate is quick to credit the more than 1.5 million other young adults, children and their supporters who participated in the #schoolstrikes4climate in 125 countries this past March for inspiring her to take a leadership role. But she is particularly appreciative of the help that she received from the members of TRAA. “They were so incredibly kind and supportive. They provided me with a lot of resources like pop-up tents and yard signs. But most importantly, they took me seriously and valued my voice as a young person.”

Long time TRAA member Steven Goldsmith views the excitement that Chappell’s youth march against MHF has generated with a mixture of pride and respect.

“Katy proved that when a person takes initiative for a just cause people respond. It is especially gratifying to see young people with a stake in the future working to put an end to such dangerous relics of the past. It’s why our doors will always be open at TRAA.”

What Kate Chappell Wants You to Know…

About the Dangers of Modified Hydrofluoric Acid (MHF)

“MHF is a strong and potentially lethal industrial chemical used in the manufacture of high-octane gasoline.  If released, MHF forms a toxic ground-hugging cloud that can drift for miles, causing damage to bones and tissue and even death to those in its path.  MHF is in use at just two refineries in California. Torrance Refinery keeps 25,000 gallons on site, and Valero, Wilmington keeps 55,000 gallons”

About the Arguments Against Banning the Use of MHF

“There is a huge misconception that banning MHF would result in a shutdown of the refinery and a loss of jobs. This is simply just not true. If anything, there will be more jobs created to manage the phase-out process. Not to mention that the Torrance Refinery supplies 10 percent of all the gasoline demand in California. Shouldn’t they bear the responsibility of budgeting for the cost of looking out for the people, families and schools they neighbor?”

About the Torrance Refinery Action Alliance

“You’ll find everything you need to learn more about the organization and the issues online at www.traasouthbay.com.  As well as everything you will need to get started advocating for safety at the Torrance and Valero refineries.”