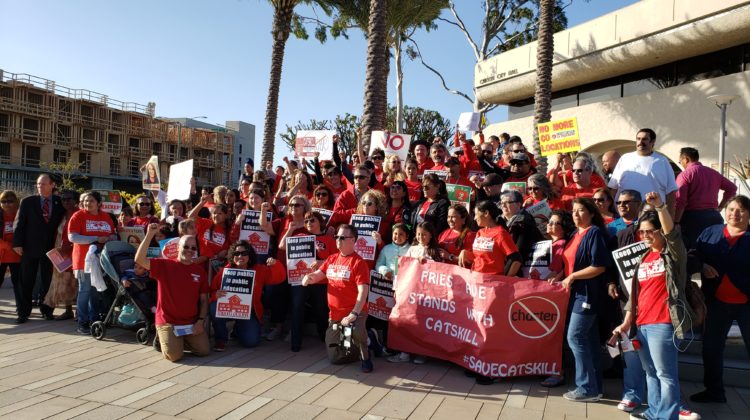 Public Opposition Deepens in Fight Against Charter Co-location at Catskill

“I will introduce a resolution at our next meeting, April 16, to shut down GANAS and prevent any charters in Carson,” Dear said at the time.

Dear urged all who oppose the privatization of public education to come to the 6 p.m. council meeting at the Carson City hall.

ILWU Local 13 vice president Gary Herrera spoke in solidarity with the opposition of co-location at the rally.

“This community, this town, is a union town,” Herrera said. “We’ll tell our members to be here April 16 to support you in your fight against GANAS charter co-location. It’s about our future, and stopping corporate greed. An injury to one is an injury to all.”

On April 10, GANAS, with only 24 hour notice, scheduled a special board meeting after two-and-a-half months of no meetings, at San Pedro’s Port of Los Angeles High School. Only two board members were present but two other board members (board vice president, Tom Scotti, and treasurer, Wallace Wei) teleconferenced from their place of residence. All heard over an hour of opposition to their plan. No one at the board room spoke in favor of co-location.

“What you want to do is morally wrong, Doug , a Catskill teacher with 41 years of teaching experience told the board. “We are concerned with your lack of experience and you are complete strangers to this community.”

“If you are dedicated to your own vision and mission statement, dedicated to the students and your academic approach ‘Demographics are not Destiny!’ then Catskill is not your location.,” Catskill teacher Elizabeth Untalan said, addressing Head of School Sakshi Jain. “You will only have a revolving door of burned out Teach for America teachers with no experience because you have nobody in your charter school company highly qualified to lead them.”

“This wouldn’t happen in Malibu or Beverly hills,” Christina Gan from Catskill said. “You are predatory and aggressive.”

“You say you are for the community, but you are taking resources away from the students,” Catskill Special Education Teacher Amanda Crane said. “We have come to your meetings with our questions, but they have not been answered.”

Others pointed out that the petition to LAUSD calls for a co-location in Wilmington, but this is Carson. GANAS has been recruiting in many harbor area cities.

“GANAS is not here for our education, but for profit; to take our school resources,” said America Hernandez, a Catskill fifth grader. “That is morally wrong.”

Teachers from other schools also spoke. “Maybe they think Catskill teachers are doing a lousy job, or the money is so good for them, they will just be another corporate parasite,” Luis Mora a teacher from Harry Bridges told the crowd Nobody here is pro-GANAS, nobody wants you in our community.”

Other teachers said that GANAS wants to take over more and more of Catskill- not just a co-location, but ultimately a take-over.

UTLA Secretary Arlene Inouye  was in attendance at the rally in support of the parents.

GANAS Academy had a May 1 deadline to accept the L.A. Unified’s offer to co-locate at Catskill Elementary. GANAS board members voted unanimously the offer of five classrooms and the sharing of other facilities.

Vice President Scotti officially announced his resignation from the board after the meeting, stating the

Over objections from the crowd, the board members present moved to a closed meeting to continue their agenda items…while the crowd chanted “Our schools…public schools.”