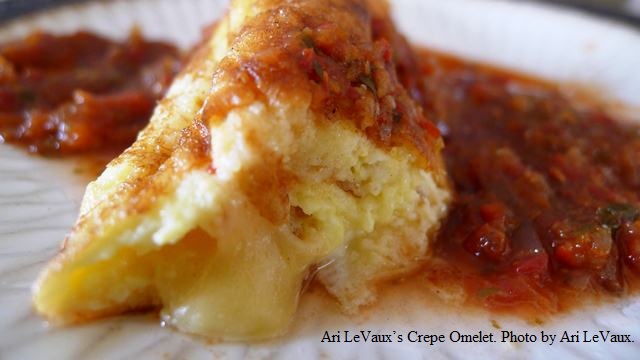 By Ari LeVaux, Flash in the Pan

I ate three or more eggs just yesterday. My hens are back in the saddle after their winter lay-cation, and my crepe omelet recipe is a well-oiled masterpiece.

A French pancake tucked inside an eggy enigma, the crepe omelet has all the makings of a trans-Atlantic home economics mystery thriller. An ovovore like myself won’t be looking away from that, not until I run out of cholesterol or coffee.

Previously, when I wanted extra-puffy eggs I would separate the yolks and beat the whites stiff. Now, two teaspoons of pancake mix is all the fix I need. That bit of flour and leavening doesn’t dilute the egg, but makes it more egg-like, reinforcing its subtle, sturdy body without interfering with the eggy taste or texture.

If eggs were truly bad for one’s health, the crepe omelet would be a problem because I won’t stop eating it. Happily, the wealth of conflicting health guidance offers me the freedom to select whatever evidence best supports my hopes and beliefs.   The only question that ever weighs on my ovovorous heart is “does the egg float, or sink?”

A floating egg is a rotten egg, which is an egg you want to avoid. Most hen keepers have the experience of discovering the occasional unsanctioned nest in some random corner of the yard, filled with eggs of an uncertain age. Cracking and sniffing can help assess the fitness of an egg, but can also lead to PTSD.

I place the egg in question on the bottom of a pot of water. If the egg lies prone, it’s as fresh as tomorrow’s news. As the egg ages, the wide end will fill with waste gases and rise toward the surface, while the pointy end stays on the bottom. At this stage an egg is still OK to eat. It will taste fine, although the texture won’t be as tight. The yolks won’t stand up like solid spheres; instead they’ll collapse into yellow circles in a puddle of watery white albumen.

And once the egg stops touching the bottom, it’s biological waste. I would send it to the landfill. Triple-bagged.

Egg floating isn’t just for flocksters. It can be a useful skill for egg buyers, too. I often float purchased eggs to see how fresh they are. Some store-bought eggs can be on the old side, standing or even bouncing on the bottom. I generally find the freshest eggs at the farmers market, but it’s also possible to bring home literal stinkers — especially during the summer. If you buy eggs from a stand that sells out every week, you won’t have a problem. But once, toward the end of market, I bought a dozen from the only stand that still had any. At home, some of the eggs floated. Bummer, but at least I didn’t crack any. Embarrassed, the seller returned my money the next week when I complained.

Nobody complains about the crepe omelet, which occupies the sweet spot at the center of a Venn diagram, where circles of egg, batter and cream all overlap.

When filled with Nutella or topped with whipped cream, the omelet will taste like the sweetest crepe in Brittany. But when filled with savory ingredients and spattered with hot sauce, it tastes like the sunniest Sunday morning omelet. Salty or sweet, the crepe omelet will always taste good with a cup of coffee, which is all I truly ask of an egg. That, and to please not float, or kill me.

You need a good pancake recipe for this dish, and some will work better than others. My favorite is Krusteaz Buttermilk Pancake Mix, which was developed at the University of Washington in the 1940s and it became a comfort food staple among the Alaska pipeline workers in the 1970s. Whichever mix you use, it may take an omelet or two before you figure out your preferred quantity, which depends on both the mix and how crepe-ey you want your omelet. With Krusteaz, I like two teaspoons per egg.

Once you have mastered the basic recipe, you have permission to take it in any sweet or savory direction you wish. Fruit or vegetable, sugar or salt, spinach or chocolate chip ricotta cheese or Philly cheesesteak or nothing but a grated cheddar, which will melt into the egg batter with a cheesy stringiness. If it tastes good, it will taste good in the crepe omelet.

Makes a single, one-egg omelet. Scale up as necessary.

Crack the egg into a bowl and beat with the milk and pancake mix. Don’t over-beat, or go after every lump. Melt the butter in an omelet pan on medium. Add the mixture, tilting the pan around for even coverage. When bubbles appear on the edge of the disc, lay the filling across the middle, perpendicular to the direction you will fold it.

The delicateness of the crepe omelet makes it difficult to fold in half like a normal omelet. Instead, start at one edge and roll the crepe across the pan in several little folds.

When bubbles appear toward the middle, slide a spatula under an edge and turn over the first inch or two. Let it sit there for a moment to set up, then fold again. You may want a second spatula to help roll it evenly. Keep folding and rolling until it’s a cylinder pushed up against the edge of the pan. (If you totally botch this part, stir it around like you meant to all along, and serve a glorious pile of scrambled eggs.)

Turn off the heat and let it sit for a minute to set up. Slide onto a pan and serve.