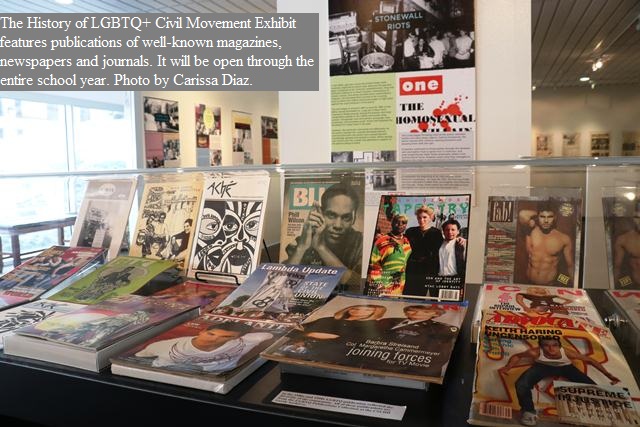 Walk in to the Cal State Dominguez Hills’ Leo Cain Library Cultural Arts Center and you’ll find stacks magazines from TIME, POZ En Español and the Body Politic displayed in a glass case. These journals tell the stories of gay men and women during the 80s and 90s, a period of time before marriage equality became a reality. Photos of men showing their intimacy in Navy attire even as they were unable to serve openly in the military. Women’s journals such as, Off Our Backs, challenged norms that forbade them to express their sexuality in public.

The exhibit, The History of the LGBTQ+ Civil Rights Movement, will be showcased for the remainder of the school year.

“It’s always nice to see people that didn’t know a lot of this stuff…,” Gregory L. Williams the Director of Gerth Archives said. “It’s not necessarily covered in the mainstream press…. [E]arly publications of the LGBTQ+ movement came from Los Angeles and San Francisco.”

The archives relate how World War II helped establish the path toward the 90s policy of “Don’t Ask Don’t Tell,” which allowed for gay and lesbian military members to serve in the United States, as long as they did not openly state they were attracted to the same sex and discouraged their higher ups from asking them about their sexuality. It also redacts establishment of LGBTQ+ organizations and gatherings.

“A lot of the history that younger queer folks know is just Stonewall, but there’s so much more to it,” said Victor Giron, a student and the director of Student Services at the university. “I really appreciate it, as an openly queer man, knowing a lot more about the LGBTQ+ history in Los Angeles.”

The exhibit includes archives on several protests one, in particular, was with different ethnicities of Latinos, African Americans and Native Americans of LGBTQ+ community from their own groups such as Unidos and Salsa Soul Sisters, coming together as a movement to fight for their rights.

One photo in particular showed lovers embracing and holding signs that read “Black is beautiful, gay is good, come join us!!!”

A wall is dedicated to Harvey Milk, the openly gay politician who was murdered in 1978 in San Francisco.  He was a voice for the LGBTQ+ community. Newspaper articles from the San Francisco Chronicle and San Francisco Examiner in 1978 bare witness Milk’s dedication. As a member of the Board of Supervisors, he helped forward a policy that allowed the community to maintain their jobs regardless of their sexual orientation or gender identity. After Milk was killed  riots that broke out when the community learned that his killer was convicted of manslaughter instead of the murder of Milk and Mayor George Moscone. Thousands of people marched down to the court to protest justice for Milk, which then led to cars on fire, violence and hurt protesters.

Protesting has always been a way that people fought for their rights and the LGBTQ+ community was no stranger to that.

“It’s great that they displayed these facts and archives,” Armarani Suarez, a student at the university said. “As part of the LGBTQIA2+ community, we don’t often see these kinds of displays because there isn’t enough queer culture museums and exhibit so this was very important.”