People’s State of the City: 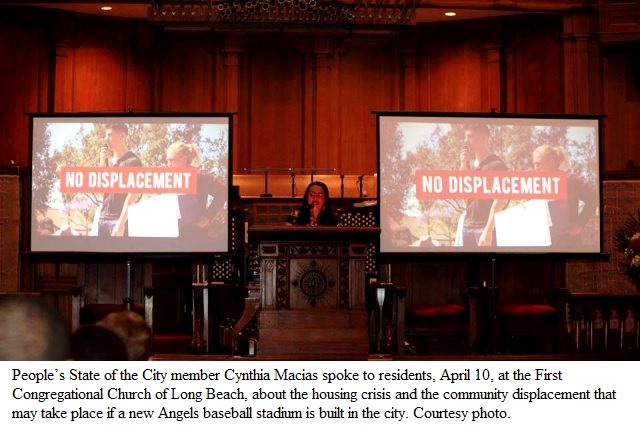 People’s State of the City:

“No displacement!” chants could be heard, April 10, from a distance as attendees filled the main sanctuary of the First Congregational Church in Long Beach. It was the eighth annual People’s State of the City town hall meeting and organizers were prepared to tackle an emotionally charged issue this past April.

They handed out red, angry-face emoji signs to attendees concerned about investments, affordable housing scarcity and high rents in the city.

“Everyone knows we’ve been in a housing crisis, but building an entirely new stadium for the Angels baseball team would speed up the displacement of poor people and drive rents up even more,” Community activist Cynthia Macias said.

Macias was referencing the displacement of low-income Long Beach residents by the new Angels baseball stadium replacing the Long Beach Convention and Entertainment Center, which would increase rent for residents.

Macias flipped through a series of slideshows reflecting statistics from the Equitable Growth Profile of the City of Long Beach, showing that the number of lower income households from 1979 to 2016 have increased by 5 percent resulting in 35 percent; the middle-class decreased by 3 percent making 38 percent; and upper class decreased by 2 percent resulting in 27 percent. The income level from lower to middle class increased from $29,769 to $36,940. It also increased from middle to upper class from $76,052 to $94,370.

The slideshows also included the community’s racial demographic makeup from the  U.S. Census Bureau of 43 percent Latinx, 13 percent African American and 13 Asian or Pacific Islander which are finding it hard to keep their homes in Long Beach.

However, residents of Long Beach have made an improvement by advocating for the city council to pass a local tenant protection policy. This policy allows renters to have protection from being forced out of their homes by landlords for no reason or attempting to increase rent with 10 percent in one year. If residents are put in this situation, renters can receive money from landlords for displacement.

Residents want protection and policies that serve the majority of the community, which is people of color and the young generation.

“Our city leaders must stop making decisions purely for the minority, and start governing in good faith for the majority of all of us,” said Dawn Modkins the co-founder of the Long Beach Chapter of Black Lives Matter. “At the root of it, as a city, we are not investing in the right things to change these negative patterns….”

Activist believe that investments in the right things include the future of the youth who have little educational support from officials, which is why they want to create awareness for the Invest in the Youth campaign. It will help the young generation in Long Beach receive several job opportunities, after-school community programs and tutoring that will create a brighter future for youth. The campaign is funded through the People’s Budget of $600,000 dollars, which was established by the community to organize a budget. Residents can decide how to spend money on public funds, such as youth opportunities or immigrant rights.

“Long Beach Children and Youth Fund established with $200,000 to develop a youth-led strategic plan,” Modkins said. “This fund will help make positive youth investments a reality and give every young person in the city an opportunity to succeed.”

With the November 2020 elections approaching, the People’s State of the City committee encourages the community to become involved with Long Beach’s social injustices by voting and speaking about these important topics. The Invest in Youth campaign will do their part by speaking up for their youth community by collecting signatures for ballot measures that help youth opportunities.

“If we care about the future of this city, we need to pay attention to young people of color and their needs now,” Macias said. “That means youth investment in education, the environment, and sustainable good jobs through trades and college preparation.”