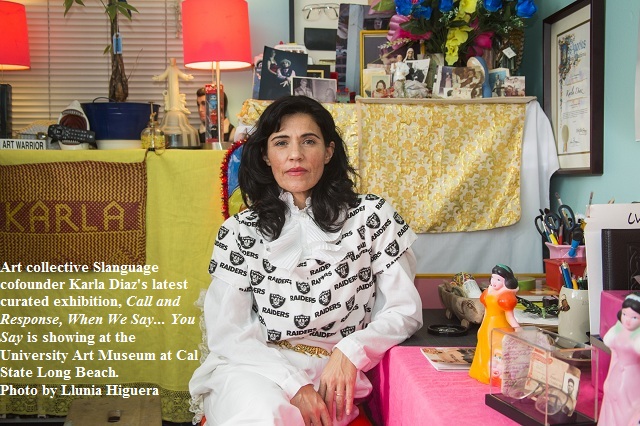 Karla Diaz and her partner, Mario Ybarra Jr., believe community involvement is crucial to art. That’s easy to see in the couple’s current exhibition at Cal State Long Beach’s University Art Museum, which makes viewers part of the conversation right from the title: Call and Response, When We Say…You Say.

Diaz and Ybarra are co-founders of the Wilmington-based art collective, Slanguage. This exhibit, which opened Jan. 28, connects pop culture and high art to highlight the conversations that occur between art pieces, artists, and patrons.

This is done by juxtaposing pieces Diaz and Ybarra curated from the University Art Museum’s permanent collection with original works by Slanguage artists. The original art from Slanguage artists is based on cultural significance; the “high art” pieces serve as the “call” to which the Slanguage artists create their “response.”

Pieces like Alfonso Garzon’s Moth Eater and Marlene Tafoya’s video art installation, Tortillas, demonstrate how artists can draw inspiration from “high art,” but channel it into art that is representative of their communities and themselves. Seeing Tafoya’s video where she stands on a street, with only her underwear on, as passersby throw tortillas at her, being displayed in the same space as Piotr Kowalski’s Pour Qui demonstrate the differences present within art.

Although not every Slanguage piece is in direct response to a certain UAM piece, there are some pieces that are direct responses to one another. Gabriel “Gobs” Fernandez, a Slanguage artist, had Polaroids from his Instagram-based collection Bunch of Chicanos, which demonstrates the diversity in appearance of Chicanos/Chicanas, displayed in response to Polaroids taken by Andy Warhol of celebrities like Dorothy Hamill and O.J. Simpson. Although taken using a similar medium, the subjects of the photographs demonstrate the way that art can resonate with artists from different generations and aesthetics.

When curating the collection, Ybarra Jr. and Diaz chose to center the pieces on love, time and access.

“In order to show you love — someone or something — you need to put in the time,” Ybarra said. “To do that, you need access.”

It is the combination of these aspects that make up the necessary synergy to create the conceptual dialogue between the UAM and the Slanguage art pieces. 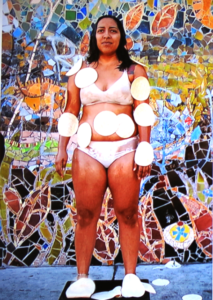 Unlike a traditional exhibit, Call and Response, When We Say … You Say has a classroom as part of the exhibit where students can go to attend workshops and classes.

“What [Diaz] has been working on with the students is different pedagogical tools … like exquisite corpse drawing which is an introductory project to collaborative art making,” Ybarra said. “It’s about working on something, passing it along to somebody else and letting them take control. It is hard for artists to have this kind of collaboration.”

While different, the classroom aspect of the exhibit is integral to Slanguage’s mission. As stated on its website, Slanguage focuses on “education, community building, and interactive exhibitions;” Slanguage utilizes this three-prong approach when it comes to art making.

Founded in 2002, Slanguage began as an art studio in what used to be a bakery. It evolved into a public-engagement space where members could make art and community members could attend art-education workshops.

Although both Diaz and Ybarra Jr. have shown works internationally in museums such as the Tate in London and Museo Cervantes in Spain, the ability to give back to communities like Wilmington is important to them.

“When I was a young person, I used to come and take classes at a cultural center … for me coming and being part of that mentorship with my mentor really instilled this notion in me of mentorship within the community,” Diaz said. “He stayed with the community, which I thought was so admirable.”

Experiences like this inspired Diaz and Ybarra Jr. to open the doors of the studio to the community. Slanguage offers residents of various ages and background space to create.

With new pieces being added throughout its duration, Call and Response, When We Say … You Say continues to evolve the conversation and inspire audiences to gain a further appreciation for a creative agency and artistic empowerment within art.

“I hope that people leave the exhibit with questions,” Diaz said. “Mainly, I hope that they engaged with the pieces because that’s what you want with art: engagement.”

The exhibit is on display until April 14.