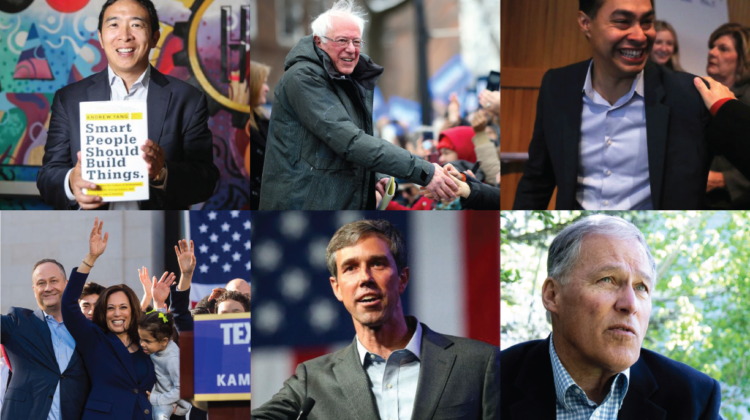 One year before the California presidential primary, there are 15 major declared candidates in the running, signaling a sharp break with the Democratic party’s past. Since 1996, there’s only been one truly wide-open competitive primary — 2004 — and there have been none defined by competing proposals for shaping new progressive directions for the future.

In 2016, Bernie Sanders— a relative unknown, nationally — challenged Hillary Clinton from the left, and exposed an untapped, unexpected hunger for big, bold new ideas, not just incremental advances within the same old framework of limited expectations, which Democrats have adopted in order to seem “reasonable,” even as the GOP has grown increasingly dogmatic.

Heading into 2020, Sanders is back, raising $6 million from more than 225,000 donors in the first 24 hours after announcing. But this time he’s running with a wide and deep field of competitors, almost all of whom are at least partly responsive to the hunger he helped to unleash — a hunger focused on problems of income inequality, unaccountable corporate power, health care and climate change, which Republicans have dramatically worsened and Democrats have too timidly addressed. The same could be said for issues of immigration and criminal justice reform, as well, though the impetus there comes from grassroots activists.

It’s far too early and there are far too many candidates to fruitfully examine each in detail, but it’s not too early to starting thinking about how the campaign should unfold in order to best serve America’s future — including how we define ourselves. To do this, Random Lengths News reached out to the chairs of local Democratic clubs, Carrie Scoville of San Pedro Democratic Club, Julian Burger of Progressive Democratic Club, Rasha Hall of Palos Verdes Democrats, Jimmy Gow of Torrance Democratic Club, and Chris Robson of Yes We Can Democratic Club.

A Field of Dreams

There was broad agreement among the group on several main points: a positive view of the large field of candidates and the strength of diversity they represent, a desire and expectation for a clarifying debate about ideas, the need for unity, and the necessity of defeating Trump and Republicans in general.

“The most important advantage of a large field of candidates is that it affords a diversity of issues to be discussed and considered by the electorate,” Scoville said. “This is the most diverse field I have seen in my lifetime,” she added. “You can be sure that issues will be raised that we have never considered from a presidential candidate, elevating the discussion and demanding more from our prospective electeds to represent all Americans.”

For example, Scoville said, “I am glad that issues of social justice are being put front and center. Criminal justice reform, climate change, gun control, healthcare, and immigration have always been avoided by Democratic presidential hopefuls. The young people and young voters are driving policy and candidates are paying attention.”

“One thing I like is that there’s a lot of women,” Hall noted. “Everybody should be able to find somebody they like.”

Gow cited “The fact that the candidates demonstrate the diversity of the party,” as particularly inspiring about the field, “especially with several women in the running.”

“If you have a small field, it tends to gravitate towards the moneyed interests,” Burger noted. “If you have a large field, you have a lot of people in there, competing with their ideas.”

“I would like to have a primary that is focused on not only issues but on the ways and the means to get those issues implemented,” Robson said.

In addition to “a vast array of opinions,” Gow highlighted biographical diversity as well. “While most of the candidates are senators, each took a unique path to reach their current position and each brings a broad range of experience to the campaign trail.”

“I think each one of them has strengths,” Robson said. “Most of them are under 50, so that  means that this is going to be good for next 20 maybe 30 years, as far as a good bench for the Democratic Party, for the progressive wing of the Democratic Party.”

But there are some possible downsides, Gow noted. “Typically, a large field would cause any candidate forums or debates to be rather cursory in their coverage of topics and issues,” he observed, and in this case, “a tendency for the media to separate the candidates into a top-tier and an undercard group, causing the voices of otherwise viable and interesting contenders to be stifled,” he said.  “Many of the candidates lack national name recognition but have some enlightened and thought-provoking positions that may not actually receive any coverage.” Examples he cited include former HUD Secretary Julián Castro’s support for Universal Pre-K, and Venture for America founder Andrew Yang’s plan for a Universal Basic Income.

When I asked about other candidates, whether anything was really missing, everyone seemed fairly satisfied, except for Hall’s brief mention of Sherrod Brown.

“No other candidates really need to be in the race,” Gow said. “Beto should run for Senate again in Texas and Biden should probably just let it go.”

“So many people were so upset about Bernie not winning the nomination that they either didn’t vote or they wrote in Bernie’s name or they voted for Jill Stein. I don’t think they voted directly for Trump, but by doing those various things, they elected Trump.”

Hall’s fear reflects a common narrative, though it’s not supported by exit poll data, which shows more Sanders voters supporting Clinton in 2016 than Clinton voters supporting Obama in 2008. While lower base turnout was problematic, blaming Sanders for that is more difficult.

Clinton won the popular vote by almost 3 million votes. She lost the election by just under 78,000 votes in three states—Michigan, Pennsylvania and Wisconsin—where Clinton was warned repeatedly to pay more attention to working class voters by strong supporters like filmmaker Michael Moore and Representative Debbie Dingle of Michigan, as well as by her own husband.

“I was one of the people that said that this state was competitive, so I wasn’t totally surprised,” Dingle told NPR the day after the election. But the campaign only responded in the last week. As a result, “Detroit turnout was down 10 percent. Flint turnout was down,” Dingle said. It wasn’t Sanders that made them stay home. The roots go much deeper. “They are still very much feeling the economic scars of the 2008 crisis. They don’t feel like anybody cares about them in either party.”

“The reason why Donald Trump is successful — and he is successful in his own little way —is because the Democratic Party failed,” Burger said. “We forgot who we really represent, and that’s regular everyday Americans who go to work and put in their 40 hours.”

“In ‘16, I was a Berner because I believed he had the most aggressively progressive agenda. I still believe that,” Robson said. But after the convention, where Sanders urged his supporters to help defeat Trump,  he said he “opened a Hillary office in Long Beach. We were a regional hub for an official campaign office for Hillary Clinton for president.” But, “This time I think we have a lot more of a progressive array of  candidates [other] than Hillary.”

“I would hope that they have a constructive yet rigorous conversation and that, at the end of the day, Bernie Sanders is our candidate and a woman of color hopefully is going to be his vice president. That’s the way I would like to have it happen.”

Gow wants a similar process, with a different outcome. “I want the issues that are important to the people to be debated and ultimately I want the best woman to win,” he told Random Lengths. “Yes, I said woman. I am certain that the era of old, white male dominance is over – and I am an old, white man – but I am also the father of two daughters and have two granddaughters. They deserve to see someone who looks like them in the highest place of honor in this country.” And because he’s a native Californian, he’s got one particular woman in mind. “I believe Kamala Harris will be a fantastic President and a perfect role model for over half of the American public. Someone our little girls can look up to.”

Harris, like fellow presidential candidate, Sen. Amy Klobuchar, has a background as a prosecutor, which Gow noticed.

“As a prosecutor and former attorney general of California, nobody on the other side can say she is soft on crime, but she is also a champion for criminal justice reform,” he said.

But that claim was disputed in a Jan. 17 New York Times op-ed by Lara Bazelon, the former director of the Loyola Law School Project for the Innocent in Los Angeles.

“Time after time, when progressives urged her to embrace criminal justice reforms as a district attorney and then the state’s attorney general, Ms. Harris opposed them or stayed silent,” Bazelon wrote. “Most troubling, Ms. Harris fought tooth and nail to uphold wrongful convictions that had been secured through official misconduct that included evidence tampering, false testimony and the suppression of crucial information by prosecutors.” It’s a charge that Harris has yet to fully engage with, but needs to be answered in the year ahead.

One way that primaries help shape politics is by prioritizing and inter-relating issues. So we asked each club president what their top issues would be.

Burger focused more specifically on just two: climate change and “the concept of universal single-payer healthcare.” As he explained, “We can start this and we don’t necessarily have to finish it, right now. But we start it and we set markers, and say ‘we’ve achieved this,’ then we’ll be better off.”

In contrast, Scoville and Robson both stepped back and named just one.

“The one overarching issue is getting money out of politics, and having publicly financed elections,” Robson said, because, “none of the progressive issues that most of us care about…. none of those will be enacted into law as long as the legislators are beholden to the special interests.”

As Random Lengths News goes to press, there are rumblings that former vice president Joe Biden and former Texas congressman Beto O’Rourke will be entering the race. Polls indicate both would have significant support. But it’s hard to say specifically what either of them would offer, beyond the elusive promise of “electability.”  Biden has run twice, each time beginning with strong Beltway backing, before quickly exiting the race. Eight years as Obama’s Vice President has bolstered him considerably, but his earlier record—tough on street crime, cozy with Wall Street—could well spell a repeat, should he chose to run again.

O’Rourke was inspiring for his unapologetic stance in running for senate in Texas. But the issue-rich environment this primary promises may not be so favorable. He’s “clearly a rising star,” Robson said, “but he is by all definitions a moderate.”  Indeed, the political science metric DW-Nominate shows him to be the second most conservative Democrat in the House during his three terms. “He needs to grow, and is young,” said Robson, who also noted how Kirsten Gillibrand and others had grown more progressive over time.

In contrast, the just-announced candidacy of Washington Gov. Jay Inslee is laser focused on just one issue: climate change. His candidacy isn’t needed to put climate change on the agenda, but it can certainly impact how it’s treated. In his first TV interview with Rachel Maddow, he advanced the argument — also reflected in the Green New Deal proposal — that action on climate change can be an organizing framework encompassing a broad range of progressive concerns.

At its best, the Democrats’ 2020 primary race can and should be about finding the best possible way of weaving together all the different issues people care about, rather than divisively playing them off against each other. Whoever can do that best will have earned the nomination in the best possible way.