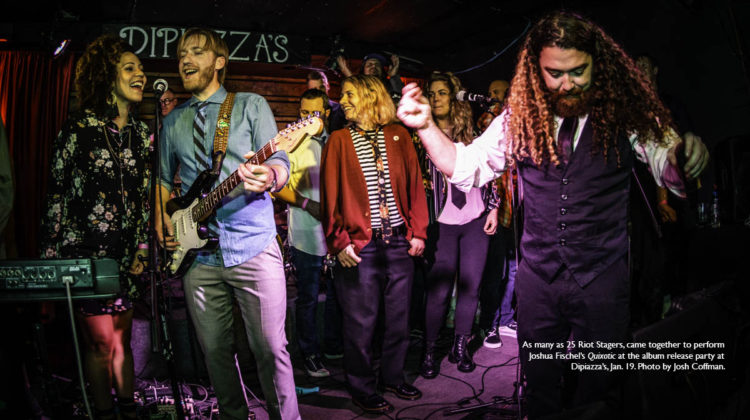 Joshua Fischel and The Fiction’s Album Release at Dipiazza’s

By Melina Paris, Music Columnist
The record release of Quixotic was an important event on multiple levels. It was the posthumous release of the late Joshua Fischel’s project and The Fiction’s debut album — nine years in the making. Most of all, the Jan. 19 event reunited Josh’s musical family the Riot Stage Rock n Roll Theatre, with its fans once again to honor Josh and perform all the songs he’d written on Quixotic at their long-time venue, Dipiazza’s in Long Beach.

Unfortunately, Josh’s life was cut short. He died of liver disease only days after his inaugural Music Tastes Good festival, in September 2016. He was 47.

The singer/songwriter was a visionary. Nine years ago he founded The Fiction and soon after, his friend Kris Jackson joined the band. The two became creative partners in multiple endeavors. Josh also formed the Riot Stage Rock n Roll Theatre and directed and produced two major theatrical productions with them, Pink Floyd’s The Wall Front to Back and The Beach Boys Pet Sounds, Front to Back. More recently, he realized his dream in founding Long Beach’s Music Tastes Good festival, or MTG. His idea was to bring together creators of music, art, and food who are both local and international to share their talents.
These accomplishments take vision. That he could get the city of Long Beach, plus its local businesses on board with a three day event — on the streets of downtown Long Beach, disrupting parking and business operations — with their support was no small feat. Josh incorporated art installations and live chef demonstrations with MTG, where attendees could take part in enjoying the results of the chefs offerings.
The Dipiazza’s performance was a gift to fans of Josh and to Riot Stage itself, including all those Josh knew and worked with through the years. Riot Stage stayed true to how the band worked with its rotating musicians, which was to include all of its members at the event. Before reuniting to perform Quixotic some of the musicians performed with their own bands that evening. But the night was about Josh and the music he shared with everyone. It was part of how he “loved on them,” said Josh’s wife Abbie Fischel as she opened the show.
Up to 25 Riot Stagers performed. It was Fischel’s idea to have a Riot Stage reunion for the release party. She promised Josh the album would get finished and put out. Then Jackson contacted all the Riot Stagers. Every one of them made it a point to get there.
The album flows. Josh sang on all of its tracks which spellbind with an array of music from spirituals, rock, blues, soul, punk, oldies and more. Arrangements are layered with nuanced surprises — a sensual violin, full trombone, rousing flute, and claps, stomps and bootstraps. And the talented Riot Stagers—many who played on Quixotic delivered that flow times two.
The first number, Go Down delivered the power of a spiritual over the loss of love. Claps and stomps filled the loss of emptiness on this track — just as the live version — with a striking delivery by Michael De La Torre, aka Mic Dangerously, and front man of Zen Robbi.
The number was inspired by a 1960 Harry Belafonte number, Swing Dat Hammer. Mic Dangerously brought it into living color with his robust baritone, perfect for this divinely inspired number.
The punk ode Kingdom tells an iconoclast story with thrusting chords and bursting percussive beats, singing, ‘I never tried nine to five. I was 17 when I realized I’d rather keep my mind alive.’
And Jericho brought a celebratory gospel feel, even with lyrics that assert the question of a prophets’ existence.
Quixotic is just that, idealistic, romantic, impractical, visionary. It also begs to wonder if Josh contemplated through his lyrics, his destiny to leave this world young.
On Go Down, he wrote, ‘I drank a fifth of Bourbon every day in July, one step closer to the day I die.’ On Kingdom, ‘I’ll never be middle aged but I wake up every day hoping another hair is gray.’
There are more lyrics like this. But not to dissuade, this album is a tonic that lifts you, just as the performance achieved.
The deeper you dive into Quixotic, the less you will know these answers — if the questions even arise.
But fall in anyway. It’s is a joyful experience beyond these queries with music that is celebratory and poignant. The Riot Stagers, brought this spirit through.
“Having that many awesome people together and really ridiculously skilled and talented people … all going for the same common cause with no egos, where everybody wanted to give was fantastic and it helps,” Jackson said. “Everyone came through and rocked it.”
He said the event had to happen in Long Beach. There are bigger venues in LA, but it only made sense to do it in Long Beach. It’s is where Josh lived and recorded. He loved the town and he put together Music Tastes Good for Long Beach.
“The vibe that was there that night and the amount of love there, I don’t think we could have achieved that at another venue,” Jackson said. “It was important. He had a lot of his work and he himself had a lot of meaning for people in Long Beach.”

“Josh had a lot of creativity, obviously,” she said. “But one of Josh’s other greatest strengths was building community.”

She said Josh was forever known as the guy who would make connections between people he knew. He was especially talented at it – specific and intentional.

“He was famous for, every time he (connected) people they would tell him, ‘Cool, I’m about to meet my new best friend.’” Fischel said.  “And it turned out that way. Josh was very good at that and the Riot Stage crew was no different. He took a big group of people and brought them all together. The love for him and the love the group has for each other is palpable every time we’re together.”

Fischel was instrumental in the record release, adding she felt like Josh because she had this “ridiculous idea to do the release at Dipiazzas.”

“And then I made everyone else do the hard work of pulling it together,” she retorted. “Josh was a visionary in that way. It was like, ‘I have this brilliant plan, now figure it out.”

Fischel and Jackson had been trying to release the record which was complete when Josh died. But life got in the way and then Music Tastes Good slowed things down. Initially they planned to have a release party at someone’s house. She doesn’t remember why or how it came to her but she felt Quixotic would be “so cool to hear it live, just once.”

The obvious option was Riot Stage to make that happen.

“Kris just worked his butt off to organize it and get it together and he did all of the composing,” Fischel said.

She touched on Josh’s many influences saying, “(He) was so eclectic. The list would go forever.”

They include De la Soul, Pink Floyd, and Joni Mitchell. And David Bowie and The Beach Boys were big influences on him. Josh was also a huge fan of Ween, Prince, Elvis Costello, Roots and Dr. Doug. Beyond that, Josh just reached to so many places.

“It’s not just music. It’s sort of like what MTG is all about. He pulled from culinary artists. Josh was the king of going to museums in far off lands,” Fischel said.

“He pulled (his) creativity from visual arts. He seeked out and absorbed culture and all those things culminated in what he put out,” she said. “He was in musical theater for the first part of his career. He was a rock musician, he loved hip hop there are so many things, it would take hours to list them all.”

Fischel is grateful she got to work with Jackson to put the album out in the world. She was overwhelmed by how incredibly generous and kind this group of folks is. The Riot Stage crew took no pay and they were in rehearsals all week. People even came from out of state on their own dime.

“And they don’t just do it,” said Fischel. “They want to do it well and right. It’s almost as if Josh (was behind it) because he was particular.”

Quixotic is available on CDBaby.com, iTunes and is streaming on Spotify and Apple Music.