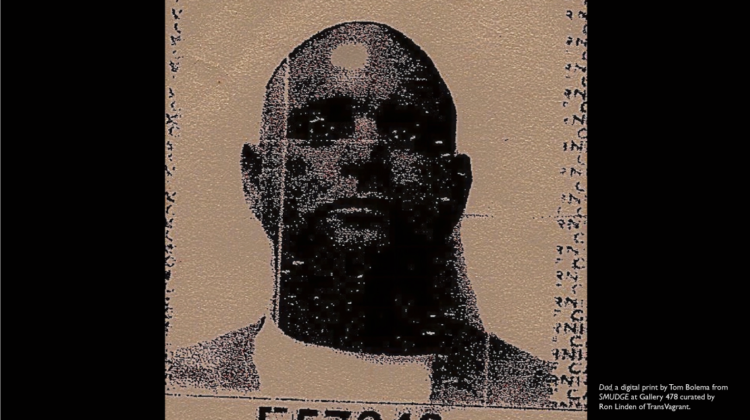 Portraits of Castaways Line the Walls at Gallery 478

The faces looking out at you in Gallery 478 are not supposed to be pretty. They are mostly grim and determined, although you can see the barest hint of a smile in one or two hopeful faces, faces that still hold on to the prospect of a life behind the bars of San Quentin Prison.

These portraits were compiled by prison Education Officer Tom Bolema who retired after 17 years working in the California penal system. He challenges viewers to wonder about prisoners lives. After spending so much time with convicted felons he wants us to know these are real people, and to consider the circumstances that brought them to live within the walls of San Quentin.

“When three strikes was implemented, the state filled up the prisons,” said Bolema. “They had to build 30 new prisons to house people after that law was passed, just to accommodate all the new people being sent to prison. That was 30 years ago, so that’s who these guys are. Despite their sometimes innocence and often horrendous reasons for being there, they are hungry for meaningful work.”

Curator Ron Linden tells us that these images are so compelling that you can’t avert your gaze. The images are at the same time provocative and evocative in the sense that they resonate with the viewer in a personal way. It’s easy to look at the photos and see a stereotypical felon, or to see your own son or uncle.

An identification card is a prisoner’s most important document. It’s a portrait taken by a cop that the inmate needs to show multiple times each day while navigating the institution. Missing it could cause a lockdown and a trip to the hole.

As described by the artist, SMUDGE refers to the anonymity prisoners experience while living for decades, even lifetimes, in a prison infamous for housing inmates serving life sentences (without possibility of parole), as well as those living out their final days on California’s death row.

“Among the greater group, the individual face becomes a smudge. The beautiful surface does not conceal the suffering subject. I share these faces, these identities, these smudges, as one would share pictures of relatives, and loved ones,” writes Bolema.

Some of the photos are printed with the inmate’s moniker, along with his I.D. number. So Blue, Landscape and  Ricochet are identified in the way they were commonly known inside the prison. Landscape liked to dig in the prison garden every chance he had, Ricochet was imprisoned for murder when a discarded pistol was dropped and accidentally killed a person.  Blue was a heroin addict. And so it goes, each man holds on to a thread of identity inside a system that considers him by the number he wears.

At heart, Tom Bolema is an artist, musician  and educator with a long history of championing the underdog socially, politically  and culturally. Early in his career in the penal system, he was disturbed to find himself adopting an authoritarian attitude that was foreign to him, but common to the prison system. He increasingly turned to his experience in Hollywood productions to create programs that sought to enrich the inmates in the face of their daily oppression.

During this period he pioneered the Television-Aided Instruction Program, a distance learning opportunity never before seen in California prisons. The educational programs he produced were featured on closed-circuit institutional channels and enabled rehabilitation through greater access to education. Bolema also brought his musical talent by organizing performances by and for the inmates.

In this way, he sought to sustain his own soul as well as the inmates. “I had to conceal my emotional impulses in order to function effectively and get the job done,” he said. “This series of portraits was cathartic for me in the process of rehabilitating my psyche.”