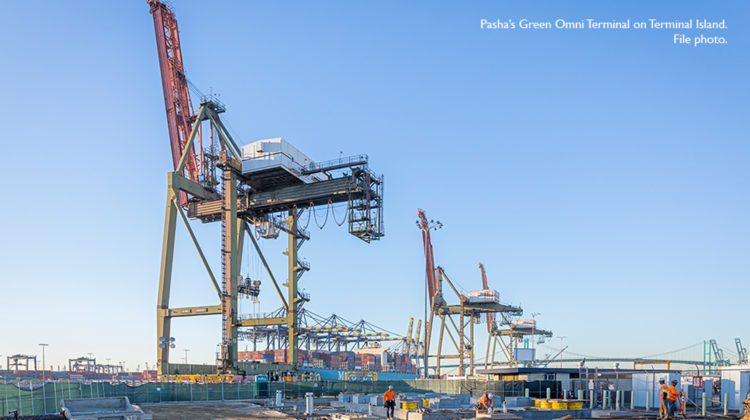 In the summer of 2016, Random Lengths News joined in hailing the promise of Pasha’s Green Omni Terminal at the Port of Los Angeles, as unveiled by Mayor Eric Garcetti at a July 12 press conference. We described it as “a game changing $24-million partnership that will build the first all-electric operated terminal at the port.”

Technologies Garcetti inspected included TransPower’s electric Class 8 truck and its 4×2 electric yard tractor, both widely used kinds of equipment. But a little more unique was something not yet ready to test: a dockside bonnet device for docked ships from Clean Air Engineering Maritime, designed to capture CO2, along with other pollutants. Two and a half years later, everyone’s still waiting to see it.

On Jan. 24, San Pedro Peninsula Homeowners United submitted a letter to the Harbor Commission, requesting information about what had happened.  Janet Gunter presented in person during public comments.

“It has come to our attention, that the Port’s choice of a $3.75 million dollar contract award to CAEM for emissions reductions for the Green Omni Terminal at PASHA has met with failure,” the letter said, and it went on to request information. “We would like an answer to whether or not the air emission device/devices there are working, and if not what the port intends to do about it.”

Random Lengths followed up as well, and was assured by POLA that progress was being made. But it appears to have been painstakingly slow, as was openly acknowledged by Dave Clegern, a public information officer at the California Air Resources Board. The board is funding the project to the tune of $3.7 million, of which $2,938,253 has been spent, according to POLA.

“There have been delays but we are hoping it will be operational within the next two months,” Clegern said.

“Clean Air Engineering Maritime (CAEM), in coordination with Tri-Mer, completed factory assembly and commissioning of the ShoreKat Emissions Treatment system  in the fourth quarter of 2017,” POLA’s Director of Environmental Management Chris Cannon said in an emailed statement. “It was delivered to Pasha in the first quarter of 2018.  CAEM received CARB approval of the test protocol for the ShoreKat in the second quarter of 2018.  The equipment that is used to place the treatment unit on the vessel was retrofitted by the manufacturer (updated counterweights, modification of software, and placement of certification labels) and completed by the fourth quarter of 2018.”

But there was more.

“Due to the size and weight of the assembled ShoreKat unit, a custom-built trailer was required to position the unit on the terminal,” Cannon explained.  “The custom trailer was delivered in the fourth quarter of  2018 and the ShoreKat was fully assembled and commissioned on the trailer.  ShoreKat will be put into position and tested on vessels upon receipt of required permits (this is expected in the first quarter of 2019).”

Just one thing: That says nothing about CO2 capture, which was the whole point of the CARB grant referred to above. That technology has yet to be integrated, and could take one of two forms.

“Tri-Mer has entered into an agreement with Global Solutions Technology to demonstrate a pilot of their non-thermal carbon destruction technology,” Cannon said.  “GST has completed the assembly of the system and it will be placed into service in the first quarter of 2019 for a six-month period.”

After that, “A second carbon destruction system developed by Carbon Clean Solutions will be demonstrated for a second six-month period,” Cannon said.

Thus, the soonest a successful test could be certified will be more than a year away. “We expect that the end result will be certification of the bonnet technology,” Clegern said. Whether a year of testing will vindicate POLA’s claims remains to be seen.