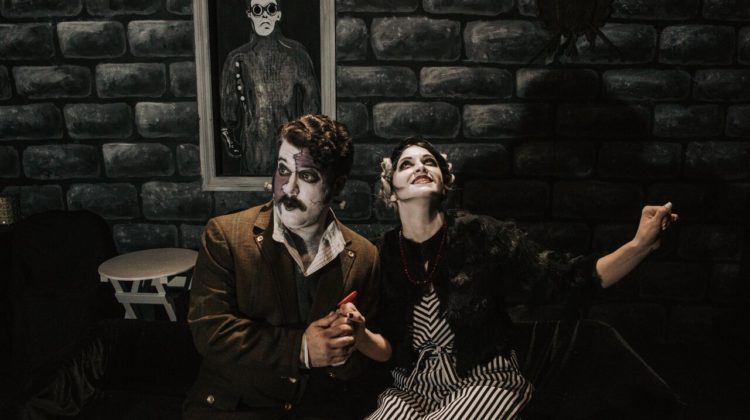 As an artform, melodrama is (to quote from the New Oxford American Dictionary) “a sensational dramatic piece with exaggerated characters and exciting events intended to appeal to the emotions.” That silent-film cliché of the mustachioed villain tying a damsel in distress to train tracks, only to have his plot foiled by the white-hatted hero, with all of them making over-the-top gestures to communicate their feelings? Melodrama.

Whether or not melodrama has a viable place in today’s world of entertainment options, it is Garage Theatre tradition to include one original melodrama in each of its seasons. This year it’s The Revenge of the Baron’s Revenge, a silly sort of sequel to the Frankenstein franchise featuring new Frankenstein monsters Eddie (Rob Young) and Emma (Emily Formentini), newly returned to Castle Frankenstein after the apparent demise of the evil Baron Charles Von Frankenstein (Adam Brooks), their creator and Emma’s former fiancé. But the Baron is alive, and, with the help of the castle’s supposed housekeepers (Kathleen Hayes and Silvia Augustinova), he’s got an evil scheme brewing.

The Revenge of the Baron’s Revenge is as nonsensical as its title, but that’s by design. It’s not trying to win you over with storytelling, so the merit of the script is largely beside the point. Still, a few passages of fairly lengthy exposition are a flaw worth mentioning, because they derail the goofiness, forcing us to wait them out to get back to what the play is all about.

And it’s about goofiness. Lots of it. The Revenge of the Baron’s Revenge is not pure melodrama, but more of a mating between melodrama and Carol Burnett Show-style sketch comedy (with a final chase scene that seems lifted from The Monkees). That means a dose of improv, and if the actors aren’t going out of their way to make each other break character and laugh, they certainly don’t mind when it happens.

There is no doubt that the cast is committed to its craft. With multiple roles, Formentini is probably the standout, although in the performance I saw the biggest laughs resulted from Young’s unintentional run-in with a chair. Seizing the moment, he made this a physical motif during the rest of the play. Funny.

But no matter the actors’ enthusiasm or chops, this is slapstick and otherwise lowbrow humor. If you are not amused by character names like “Lola Von Punchy Face,” you might want to skip this one. The Garage bills the play as “suitable for children 8 and up,” and that’s exactly right. I can’t speak for people who like improvy sketch comedy (I never was a fan of Burnett and co., and they’re legends of the form), but surely a target demographic here are kids 8 to 13. I don’t know how the Garage can get them out for an 8 p.m. show in the middle of the school year (there is only a single matinee, on March 9), but children in the audience would probably make for a fuller experience even for adults who like what they’re seeing.

The Revenge of the Baron’s Revenge at the Garage Theatre