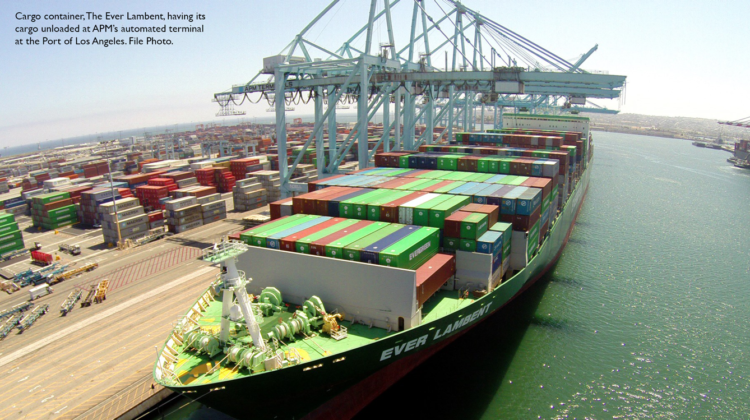 Plans to move toward automation at APM’s Pier 400 terminal were pulled from the Harbor Commission’s Jan. 24 agenda at the last minute, but ILWU representatives showed up in force with dozens of members to speak out against the move, starting with Local 13 President Mark Mendoza.

Mendoza referred to Maersk, APM’s corporate parent, as “a foreign company coming in here to displace workers.” To place the blame on the California Air Resources Board and clean air goals was deceptive, he claimed, a theme echoed by others as well.

“Echoing Mark, there’s other options out there,” said Joe Gasperov, president of Marine Clerks Local 63. “We understand the environmental concerns and the regulations that everybody has to meet in the coming years,” he said. “But there are other options that include keeping people employed to hit those same requirements.”

“There’s plenty of equipment out there today they can utilize that can utilize a person to operate that equipment,” said Danny Miranda, president of Foreman’s Local 94.

“For the terminal operators to use clean-air action plan that we worked so hard to develop here in both ports as an excuse to eliminate our jobs to me is very bad decision on their part,” he said. “It’s about our livelihood and our jobs.”

This attempt to shift the costs of clean air onto labor is nothing new. Port truck drivers shouldered the vast majority of costs of the Clean Truck Program, due to misclassification as “independent owner-operators.” A 2014 report, “The Big Rig Overhaul” found that wage theft resulting from labor law violations amounts to $850 million in California annually, and that trucking companies forcing drivers “to pay for these trucks through leasing programs… underlie most of the liability.”

Here, the mechanism would be different, but with the same result: labor would pay the cost of cleaning up the air—a mess it did not create or profit from. To make matters worse, it’s a betrayal of a decades-long partnership, as pointed out by John Fageaux, president of ILWU Local 63 Office Clerical Unit for almost 20 years.

“Over those years, I’ve negotiated many contracts with these employers and one of the things that they always talk about in negotiations is this is a partnership, a partnership with labor,” Fageaux said.

“I watched the longshoremen, and the clerks and my OCUs [Office Clerical Units] work day in and day out to help build these companies into what they are today,” he recalled. “So to have them now want to introduce this automation and basically throw out the window—this relationship that we built over the years—and have us replaced with the machine is wrong,” he said. “This is a partnership. It needs to be treated like that.”

“This is not about productivity,” said Gary Herrera, Vice President of ILWU Local 13. “It was told to us about across the table. We don’t care if the production goes down.” Rather, “They care about getting rid of labor.”

Ray Familathe, who served as International vice president of the ILWU International for nine years, questioned the move from several perspectives.

“They’re going to purchase about 130 automated straddle carriers, they’re hybrids,” he said. “But that same Kalmar equipment… can be purchased with a cab on it, it can put longshore operators to work. This type of operation limits the height of the cargo will be stacked. In fact, I think will be stacked about three high, that’s why you need the big footprint of all the acreage.”

“What about when cargo continues to increase?” he asked. “It’s a unique footprint. The only place it’s being used at this level now is Brisbane, Australia. If you look at the size and scope of that terminal, it’s very small. We’re concerned about the future growth of the port, and of course, employment opportunities.”

“I represent the big bad company,” said John Ochs of APM in a rare moment of honesty, but things went rapidly downhill after that, as he tried to deny the international behemoth he is part of.

“Although you may have a perception of AP Moeller as this foreign company, these people in Denmark you’ve never met, APM terminals Los Angeles is a U.S. company, we’re a standalone company,” Ochs said.

But they’re still a subsidiary, once removed: APM Terminals is headquartered in the Hague, and is owned by Maersk, in Copenhagen. Things went from bad to worse after that, concluding with an attempt to throw a Harry Bridges quote back in the longshoreman’s faces, only to be cut off for running overtime.