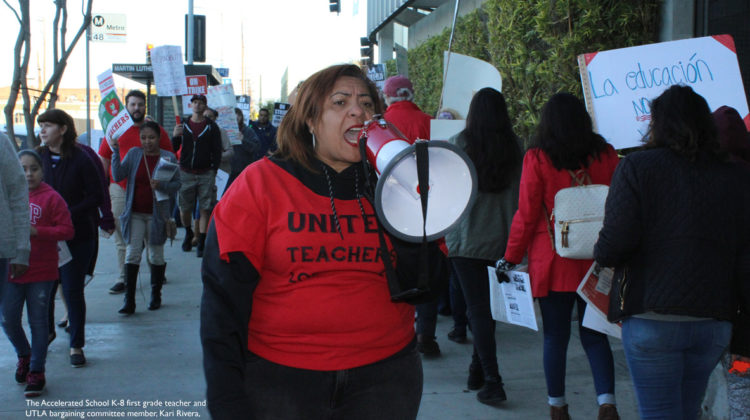 UTLA’s charter school contingent ended its walkout at the three Accelerated Charter Schools in South Central Los Angeles Jan. 29. The job action had started a day after the general UTLA strike began on Jan. 15 and ended six days after the general strike concluded. More than 100 students and parents joined these teachers on the picket line.

Before this strike, UTLA representatives had been negotiating for 21 months on issues related to due process and wages with the Accelerated Schools founder and CEO Johnathan Williams.

Among the issues was the teachers high turnover rate, which, according to the schools’ UTLA representatives was averaging 30 to 50 percent annually.

“Once hired, a teacher would be placed on the rating-in schedule based on experience and education. Once placed, a teacher’s salary only changed when there was contract bargaining. Most recently, the raise was 5 percent a year. A committee was supposed to meet to determine how funds would be used to cover merit pay, but two problems emerged: The funds were never raised and the committee never met.

Their collective bargaining agreement does not include binding arbitration. It only has advisory arbitration.

“We signed on the mission to educate and give students an opportunity to learn,” Blackwell said while on the picket line on Jan. 25. “We are not able to fulfill this goal because of high teacher turnover and not getting quality teachers due to that lack of stability.”

“In some classes students go an entire year with a substitute teacher who is not credentialed nor qualified to teach that subject, especially in our K-8 classes. Twenty-five percent of each grade level fails in the transition to high school … Many classes are in the high 30s. This administration does not understand the importance of retaining teachers to improve student learning. There is no nurse and we have one counselor for 1,800 students.”

Annenberg High School students picketed alongside their teachers in support.

“We are out here because my education is being robbed and I want to help the teachers,” said Marilyn Torres, an Annenberg High School sophomore. “My classes need to be meaningful.”

One ACS parent who had been on the  picket line daily, Maria Sanchez,  had been organizing other parents to come and show support for the teachers.

“This is our community school,” Sanchez said. “Teachers don’t have job security and they are intimidated by the principal.  So, we are here for better conditions for the teachers and students.”

At the rally was Kistra Borden, who brought greetings from the San Diego Education Association. To a cheering crowd, she told participants: “You are making history with the first charter school strike in California history.”

Also bringing solidarity was Keith Brown, president of the Oakland Education Association. “Your strike is the coming together of teachers, parents and the community; standing together is an act of true courage. It has sparked a fire to encourage other charter school teachers to organize a union and fight for students.  We are here to support you and to say that in LA and Oakland we are taking a stand that our schools are our priority.”

Cecily Myart-Cruz, UTLA Bargaining Committee member and National Education Association vice president, pledged the continued support of the UTLA. She said she is “standing shoulder to shoulder with you … Don’t give up. We have the courage to do what is right.  Our soul is not for sale. Our students are not for sale.  We will make Accelerated Charter go to their knees and give you what you want. When we strike we win!”

In a related development — as a reaffirmation of the effectiveness of the UTLA  six-day strike and the overwhelming parent and public support for educators — in a 5 to 1 vote, the school board passed a resolution calling for a state study and an 8- to 10-month moratorium on new charter schools in the district until the study is complete. The NAACP also backed this proposal. The discussion now heads to Sacramento.

UTLA stated that: “The California Charter Schools Association bused students to the meeting, leaving a day of instruction behind to attend. CCSA did so under the false pretense that the board was considering a ban of all charter schools. Teary-eyed students talked during public comment, thinking that their school would be closed if the resolution passed.”