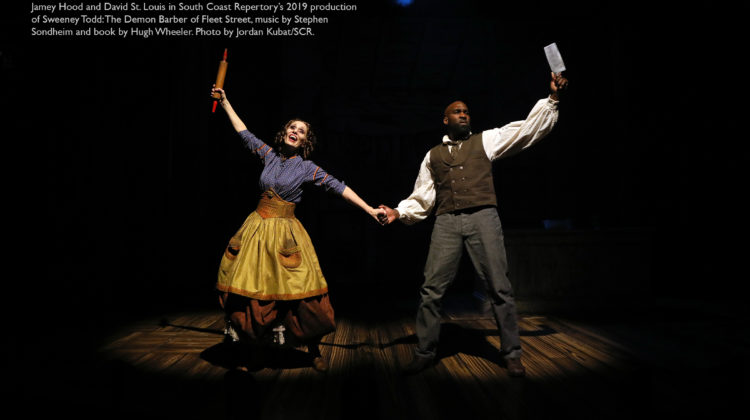 Sweeney Todd: The Demon Barber of Fleet Street is so challenging to perform that the potential for it to be the worst of theatrical experiences is encoded in its DNA. Done right, though, it’s challenging to review, if only because you come out of the theatre so awed by its overpowering genius that you fail to recall details of the production itself.

But they’re not paying me to be forgetfully awed, so let’s start by noting that South Coast Repertory’s current production of Stephen Sondheim’s magnum opus clearly falls into the latter category. Despite a few shortcomings, lovers of Sweeney Todd and neophytes alike will come away with the special satisfaction that comes from having imbibed a truly great work of art.

In case you don’t know, we’re in the mid 18th century, and Sweeney (David St. Louis) has returned to London find his wife and daughter Johanna and avenge himself against Judge Turpin (Robert Mammana), who 15 years earlier sent Sweeney up the river in a gambit to get Sweeney’s wife. When Sweeney learns from Mrs. Lovett (Jamey Hood), the proprietor of a shop that makes “the worst pies in London,” that his wife poisoned herself and Turpin is raising Johanna (Juliana Hansen) as his own, his thirst for vengeance grows beyond the bounds of possible slaking (“Not one man, no, nor ten men, nor a hundred can assuage me”) ― and yet, paradoxically, this becomes his will to live. Sweeney and Lovett combine their desires and talents to create a grisly going concern, and although Lovett dreams of a happily ever after, vengeance is a dish that ultimately consumes everything around it.

Sweeney Todd is written as a big show, and director Kent Nicholson manages to keep it big while shrinking it down to fit the Segerstrom Stage ― not crazy small, but a Broadway stage it ain’t ― making this about as intimate a Sweeney Todd as you can get while preserving its air of majesty. It’s so intimate that sit in the first few rows and you may very well find yourself part of the action.

Audience interaction is an example of the playfulness that may be the best thing about SCR’s take. Nicholson mines every ounce of humor that Sondheim embedded in the script, guiding the cast not only to all the explicit jokes and witticisms (of which there are many) but also to hidden gems, a few that are of Nicholson’s manufacture (such as a resentful corpse who brings the house down with a single glare).

The acting is fine throughout. Among many highlights is Hood’s performance of “By the Sea,” which she drolly carries by sheer force of personality, with only a parasol for support. Hood and St. Louis also excel in “A Little Priest,” the show’s most extended stretch of lightness. Among the supporting players, Roland Rusinek is a fantastic Pirelli, every bit as bigger than life as his character aspires to be. Conlan Ledwith sings a good Toby, although the role would be more emotionally impactful played by a kid rather than a twenty-something.

Although Devin Archer (playing Johanna’s suitor Anthony) is consistently strong (his last note on the “Johanna” redux ― wow), Rusinek is a model of perfection, the chorus strong for its compact size, overall the singing is the production’s weakest link. Sometimes the rococo vocal lines do not feel one-hundred percent dialed in. Hansen can be a bit sharp, while St. Louis’s tone and diction is sometimes muddy. But when delivering some of Sweeney’s more drawn-out melodies, St. Louis manages some of the show’s best singing, particularly in combination with Archer. Rhythmically, the singers are generally spot-on ― which is no small task.

Under the musical direction of David O, the 10-piece orchestra ably handles a score written for more than twice as many players. The rest of the mise en scène is similarly seamless. Simple yet effective scenery and lighting set us firmly in Sweeney’s dark world, which Melanie Watnick’s costumery dresses up beautifully. Perhaps the most unsung of heroes is sound designer Cricket Myers. There’s a lot going on acoustically, but Myers and company get all of it across with balance and clarity.

South Coast Repertory has not brought us a perfect Sweeney Todd, but its flaws are not fatal and its charms obvious. This might not be the cast recording you would take home, but it’s a show worth going to see, clearly displaying what makes Sweeney Todd a permanent part of the musical theatre pantheon.

From Amazing Grace to the Marley Festival