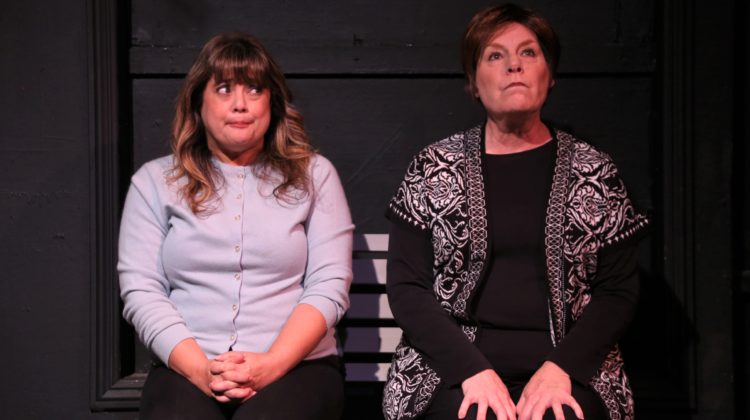 This Year’s “Pick of the Vine” Yields Too Little Variety

Every January, Little Fish Theatre kicks off their new season by offering “Pick of the Vine,” a program of short plays, each by a different author. This is my fourth taste of these annual offerings, and while I detect minor notes of pith and cuteness, there’s just too little variety for my palate.

Frozen Foods leads off nicely. Cindy (Rachel Levy) comes across Carol (Holly Baker-Kreisworth) in the eponymous aisle, where the latter has gleaned an epiphany about the falsity of existence (“This is like that Keanu Reeves movie”) from the seeming randomness of sale prices. Levy and director Cinthia Nava-Palmer’s staging bring the funny.

The next two plays are like mini Twilight Zone episodes, neither of which have much to offer. The Sum of Your Experience, where one man (Perry Shields) a robs another (Don Schlossman) of his identity by somehow collecting one-line answers about the victim’s life fails by being a far too superficial examination of identity. My Scale Is Lying to Me’s tale of a woman (Baker-Kreisworth) who finds her scale is telling her truths about her life circumstances as opposed to weight (think Rod Serling gone SNL) might have a cutesy premise, but that’s about it.

The C Word is the first piece of the night that modulates its dynamics. A woman (Levy) who just found out that she probably has breast cancer confesses her plight to a complete stranger (Ryan Knight), lamenting that she’s never been adventurous, providing moments of humor and pathos. Still, as with The Sum of Your Experience, the consideration of the issues in play are not deep enough to stick.

Aleks Merilo’s The Last Bride of Ansbruk Village, the story of a logistically-challenged WWII wedding, is the night’s longest⎯and best⎯play, providing us with an actual story arc with a quiet twist and unexpected emotional nuance. Little Fish’s tiny confines and near complete lack of sets (s.o.p. for Pick of the Vine) make it difficult to do justice to the action’s multiple locations, but otherwise director Nava-Palmer serves the material, and the cast of six all get it just right.

We come out of intermission with a rapid-fire sequence of six unrelated micro plays (a couple no longer than 90 seconds) collectively identified in the program as Pick of Levine, as all are authored by Mark Harvey Levine. With premises ranging from a couple placing their order at a relationship restaurant (“I’d like a lot of sex.” “Oh, I don’t really want a lot of sex. “I’ll have my sex on the side, then.”) to a woman who has been “it” since grammar school finally coming across the girl who tagged her 27 years earlier, the most that can be generally said about four is “cute.” The exceptions include the shortest play, a 60-second bit of social commentary that is simply a school of fish rapidly changing directions, each time led by a new fish spouting leadership platitudes that will certainly sound familiar to my fellow Americans. The fish hats and lighting give this one a unique look, and the commentary is worthy of a good political cartoon.

Canvas, an encounter between a Gold Star mother (Susie McCarthy) and a drifter who’s wearing a bit of stolen valor (Knight), might be something if it were expanded into a one-act, where we could get beyond the surface of the psyches of the characters, but there’s not enough here for this one to stay with us. It’s a good try, though.

Beatrix Potter Must Die!, where Farmer McGregor (Schlossman) does a bit of Terminator time travel to kill the eponymous author (Baker-Kreisworth) before she can complete the work that will make it unfashionable to kill those pesky wabbits, is exactly what you imagine it to be. On the other hand, I’m not sure what Old Aquatics is. I know that it’s the dawn of New Year’s Day, and as happens every year with this woman (Levy), she has drunk herself silly to combat her disappointment at the end of the holiday season and her expectations of embarking on another dull year of life. She laments all this to the rideshare driver who’s come to pick her up Daniel Tennant), who in return shares his feelings about the dullness of his life. It’s a premise that gets tired very quickly, and it’s an unfortunate choice to close Pick of the Vine.

While last year’s Pick of the Vine featured a nice variety of minor gems, this year’s offerings seem more limited in scope, generally alternating between the litest of skit comedy and more serious works that don’t dig deep enough, and with multiple pieces leaning on similar conceits (e.g., two people outside sitting on a bench or waiting for a ride). Perhaps it was just slim pickings from the 800 or so submissions Little Fish received this year. Whatever the case, while Pick of the Vine 2019 will get some belly laughs from what seems to be Little Fish’s target demographic (which the company seems to know, as I’ve yet to attend a play there that the audience didn’t seem to appreciate, especially the comedies), for me this time it hasn’t quite come together.