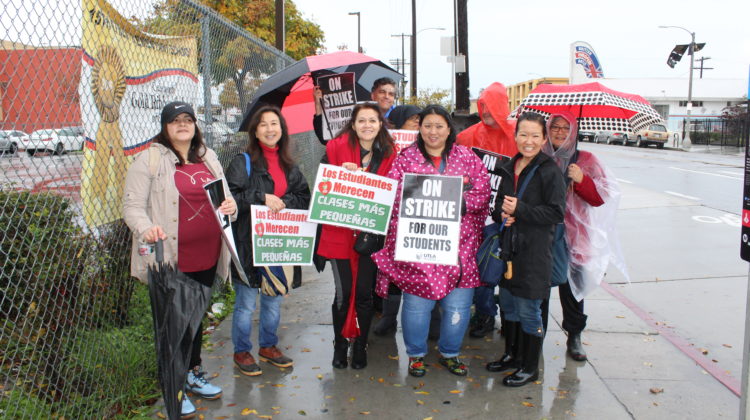 On Saturday January 19, UTLA organized regional meetings of picket captains, chapter chairs and UTLA leaders to plan broadening solidarity going into week two of the strike. They showed their determination to win…to win for the students and public education.

I woke up Sunday after attending that inspiring meeting for the harbor area to see the banner headlines in the opinion section of the Daily Breeze: “The Union’s War on Kids.”

The façade of impartiality of this newspaper, which for years has ranted against working people’s struggles, strikes and their unions, immigrant rights, a woman’s right to choose and environmental justice has been torn away.

Let no one have any illusions which side the Daily Breeze is on. They are stand on the side of union busters, school privatizers, big business and the very wealthy against working people. The lead article was most of the front page, by Rebecca Friedrichs. She is a long-time union opponent, opponent of public-school education, pro charter and privatization who writes under the “authority” of being a teacher and speaking for what she says are the “thousands of teachers who have been silenced by the bullying of the union.” She says she “wants parental choice, and most choice schools are nonunion.”

Well my answer to that are the 15,000 parents and students who joined the UTLA picket lines this past week, the tens of thousands of parents who kept their children out of the schools In acts of solidarity with the teachers, and the students themselves who marched on the picket lines in support of their teachers demands. That is parental choice in action, in solidarity. Parents have taken the side and it’s not due to the UTLA bullying but the understanding that teachers are fighting for what is right, they are on the right side of history.

And this, I hope, will be the next task of the UTLA after winning this strike: unionizing all charters so they can no longer be used as a hammer against unionized teachers, as a drain from public education funds. With all teachers unionized, UTLA will have so much more clout in determining the best possible course for public education and fighting to get necessary funding from the district in the state.

Friedrichs is explicit in which side she is on. “Kids damaged by union inspired attacks on their schools. Kids don’t have lobbyists. They have parents who’ve been silenced by unions and teachers like me who are disgusted by unions who use us to gain power at the expense of kids. So now you know how bully unions terrorize teachers, parents and kids.”

Wow. What lies that are fit to print and endorse as the obvious position of the Daily Breeze editorial board and publisher.

I do not know what planet or what school district she teaches in, but it is certainly not reflective of the hundreds of thousands of teachers around the country from West Virginia to Arizona, Oklahoma and now California who are standing up to the decades of attacks on teachers wages, pensions and working conditions and government dismantling of public education (under both Democrats and Republicans). It is the tremendous outpouring of support for the UTLA that has made the LAUSD school district flinch, and has made the Daily Breeze so hostile to the increasing strength and power of the UTLA.

Working people throughout Southern California, nationally and even internationally are cheering on the teachers, sending solidarity in many forms, and greater numbers of parents, students and other unionists are joining the picket lines. Expanding this solidarity will guarantee victory. We need other unions to actively come to support the teachers, on the picket lines and opening their halls to students who don’t want to cross teachers’ picket lines. And, I know absolutely that thousands of nonunion charter school teachers are cheering them on also. A UTLA victory is a victory for all of us.

So next time you read the Daily Breeze, you will not have to ask yourself which side are you on, you will know. ONE DAY LONGER THAN LAUSD.