On the Road to a Bountiful Wil... 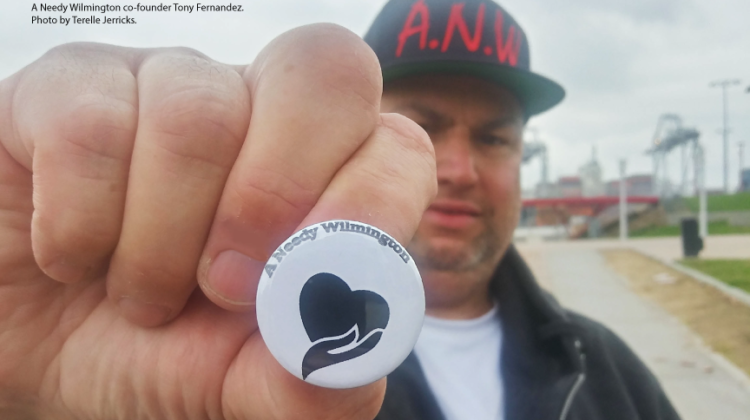 Tony Fernandez was an aspiring journalist when he began to appreciate the power in names and words But only since founding A Needy Wilmington, the Banning High School-based non profit, has he come to more fully understand it. In other words, the name didn’t sit too well with lots of the people who reside in the Heart of the Harbor.  They are a community searching for an identity that will recognize them as more than a Los Angeles afterthought, and “needy” is not the image they want to conjure.

A Needy Wilmington is the spearhead of an effort to support Phineas Banning High School students and their families who are struggling to make ends meet. These families aren’t necessarily homeless but the struggle to survive and keep the family unit intact is just as real.

“A lot of times, kids come to school unshowered … they don’t have toothpaste …  things we take for granted everyday. So twice a year we give away backpacks, school supplies, hygiene products and other toiletries.  Everything they need so they can’t say ‘I can’t come to school today because I don’t feel good about myself.’”

Fernandez knows intimately the stigma attached to homelessness and the pervasive belief that people who are homeless are more invaders than neighbors without shelter. Whether it’s Wilmington, San Pedro, or parts of Los Angeles or Long Beach, housing skeptics bloom like climate change deniers saying, “There’s no housing shortage. We don’t need any multifamily housing units.” Meanwhile, rents rise ever higher and the numbers of Southern Californians living on the brink of homelessness rise another notch.

The backlash against the term “needy” never deterred Fernandez. “Have you ever looked up the definition of ‘needy?’ It means being in want; to be marked by want of affection and attention. That’s what it is. And I was one of them.”

Fernandez was 12 years old when his father moved him, his younger brother and mother to California from New York. Fernandez said they stayed with his uncle until he realized that “he [Fernandez’s father] was lazy and didn’t want to work.”

“My uncle gave him an ultimatum, ‘get a job or get out.’ My uncle helped him get a job at a box company.”

It didn’t go well. Fernandez got a promotion that a child should never have to receive, let alone in the middle of the night. Fernandez recalled his father waking him out of a sound sleep and saying, “Here’s $100. You’re in charge of the family now.” Fernandez’ father got on the Greyhound to New York.

“I was raised on bread, peanut butter and beans,” Fernandez explained. “I didn’t get to go out. I didn’t have many friends and I didn’t have name brand clothes. I wore rubber-soled shoes from Kmart.”

Going to school and doing what he needed to graduate became his focus. Fernandez got involved in a job experience program while working at an elementary school in South Gate.

When he turned 17, things started changing. His mother gave him an ultimatum. “Get a job or get out.” But Fernandez wanted to go to school as well.

“I went from staying at friends houses to living out of my car to sleeping next to a brick wall with a carpet around my head,” Fernandez explained.

Fernandez slowly got on his feet starting with a studio apartment in Lynwood after becoming a security guard and working his way up.

“I went to South Gate, Downey, then Bellflower,” Fernandez explained. “I was one of those people.”

Meeting at the Point of Need

Outside of those special giveaway events, A Needy Wilmington operates what they call a “hope closet,” which stores emergency toiletries for students in need throughout the year.

Programs beneath the A Needy Wilmington umbrella include Operation Pilot Wheel and Adopt a Pilot which were established in 2016. They incorporate a multi-pronged approach to help entire families of poor students. A Needy Wilmington collects clothing, food, toiletries, blankets and feminine hygiene products. Donors can adopt  an entire family and provide them with food, clothing, Christmas gifts.

Prom Pilot is a program designed to finance the prom for students who would not be able to afford it.

“Prom Pilot purchases the tuxedos, the dresses the flowers, the prom tickets. Anything that needs to be done, we try to step in,” Fernandez said.

Fernandez is pushing to expand the number of schools they are serving.

As a high school student in the early 1980s, Fernandez was a part of the leadership class that organized food giveaways on third Saturdays out of parking lots. He also volunteered with the Kiwanis and Key clubs. After graduating from high school he worked with First Christian Church in Bellflower to set up the church’s food ministry to help financially struggling families. This experience gave him his first look at what can happen when a charitable organization hasn’t crossed every “t” and dotted every “i”.

“We lost [the food bank] because we didn’t have a conditional use permit,” Fernandez explained. “You have to have certain permits for food items and things like that … because you have to deal with the public. Even though we got the food from the food bank, and we filled out the proper paperwork, facilities have to be clean and in an area where vermin can’t get to it. For yogurt and all of that, you have to have proper refrigeration and working gauges so that the food is at the right temperatures. We didn’t have any of that.”

Seventy-six percent of 650,000 students in the Los Angeles Unified School District qualify for the free and reduced-price meal program-a measurement used to determine Title I eligibility. Schools in which 40 percent or more of the students come from low-income families, receive federal funds to close the achievement gap between low-income children and their middle class peers. Eighty-seven percent of Banning High School students qualify for the free lunch program.

Observing the charitable event from an operational standpoint, Fernandez believed they were doing excellent work and wanted to use his experience to help take things up to another level.

Fernandez recall telling Rodriguez, “This is really good. You guys don’t really put out there as far the concept, how many people are involved, especially for the kids who coming on their Thanksgiving break to participate — and you’ve been doing this year after year.”

The veteran volunteer took it upon himself to promote the work of the organizers of the Thanksgiving in the Harbor by establishing a Facebook page and website and began documenting and curating posts highlighting the people they’ve helped.

In 2016, Fernandez began pushing the group to become more organized and transparent. He established a social media presence for the group through blogging and podcasting about the group’s efforts and showing where the donations were going while at the same time laying the groundwork for establishing A Needy Wilmington as a 501 c(3). The group received this status this past November.

Fernandez has made it a point to highlight the businesses who have helped them with time, money and resources over the years, including Ricardo and Rodolfo Sanchez of Maya Restaurant and JT Stotser of Port Hueneme Marine Supply.

From a Needy Wilmington to a Bountiful Wilmington

Fernandez is a believer in the power to speak things you want into existence, regardless if he realizes it or not. It’s revealed when he explains why the name “A Needy Wilmington,” was chosen.

“You can’t have a pretty name like everybody else because it doesn’t serve a purpose,” Fernandez explained. “In order for something to catch, it has to snap. The only way someone is going to understand something is if you take something that’s really happening in the town that you’re in.”

“To become a Bountiful Wilmington, we need offices or satellite offices where someone can get information or get resources without having to go somewhere else,” Fernandez said.

Fernandez noted that in the South Gate neighborhood where he grew up, aid agencies used park-and-rides as pick-up locations for their vans for those needing resources. The Needy Wilmington founder never did understand why it’s so easy to establish emergency shelters and services when there’s a devastating fire, flooding or earthquake, but the same can’t be done for homelessness, a bonafide crisis.