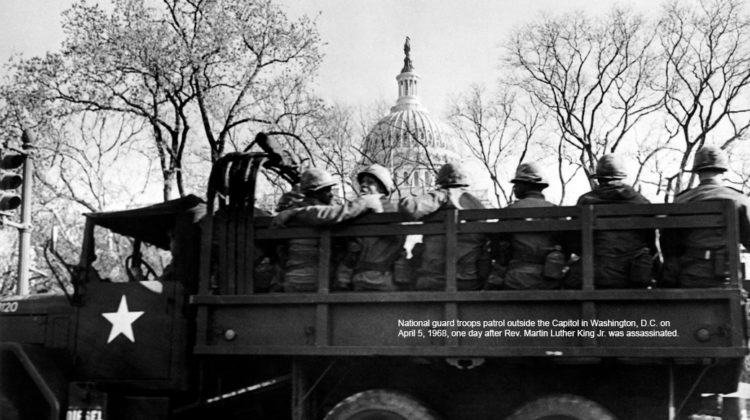 We are approaching the end of 2018, a largely troubled year, whose dwindling days perhaps fittingly conclude the 50th anniversary of the year that changed this country — 1968 — a time not unlike today with its darkening sense of disenfranchisement, resistance and political demonstrations.

It was also a time of violence, racial injustice and an enlightening awareness for a young generation whose ideals and values were not represented by their national leaders.

The Vietnam War and the Civil Rights movement were the bookends of this chapter, while the bullets of political assassination became as important to the course of a national election as the ballot box. The pages of the hundreds of books, articles and films that have attempted to explain the impacts of 1968 are far too many to cite here, but their reverberations continue to make our path unsteady, even for those who too young to remember who were not yet born.

Motivations for 40 years at the Masthead of RLnews

I was just 17 in the beginning of 1968. Over the past 40 years as publisher of this newspaper I have often been asked, “What has most motivated you in doing what you do?”  Much of it started there in the beginning of 1968. I cannot say for certain that one particular moment struck a match in me, as there was a calamity of events in 1968 that coincided with my coming of age.

On Jan. 15, at age 87, Jeannette Rankin, who as a congresswoman from Montana voted against U.S. participation in both world wars, led some 5,000 women on a march in Washington, D.C. to protest the Vietnam War. The event highlighted generational, political and class differences among the marchers but gave the growing women’s movement a motto: “Sisterhood Is Powerful.”

On Jan. 30, North Vietnamese communists launched the Tet Offensive. The assault contradicted the Johnson administration’s claims that the communist forces were weak and the U.S.-backed south was winning the war.

On Feb. 27, Walter Cronkite, in a CBS-TV special on his recent tour of Vietnam, said the U.S. war effort was “mired in stalemate” and amplified public skepticism of the war. President Lyndon Johnson privately admitted that if he has lost Cronkite he’s lost the nation.

Previously in 1965,  I witnessed LAPD officers use billy clubs and tear-gas canisters on 5,000  marching anti-war demonstrators in Century City as President Johnson escalated  the war.  It was later investigated and called “a police riot,” much to the chagrin of the city fathers. It was precursor of things to come.

However, in 1968 my father, understanding my interest in politics and government, decided to send me on a trip to the United Nations and Washington, D.C. with the Friends Field Service, a Quaker organization. This group of teenage suburban kids from all over the county (all white), flew into New York to ostensibly learn “how our government worked.”

We toured the U.N. headquarters in the Turtle Bay neighborhood of Manhattan on the grounds overlooking the East River. A full-sized tapestry copy of Pablo Picasso’s Guernica, by Jacqueline de la Baume Dürrbach, hung on the wall of the U.N. building at the entrance to the Security Council Room. It famously illustrates the violence of the German bombing the Republican forces in the Spanish Civil War.  We got to see the General Assembly, and of course the grand plaza flags of the member states, arranged in alphabetical order and the Dag Hammarskjöld Library, named after the second Secretary General of the United Nations.

It was then on to Washington, D.C. to visit the United States Congress and to see how American governance operated. We arrived on the fateful day of April 4, got settled in our hotel and were scheduled to have an interracial party with some inner city teens at a local community center.  As I recall, we were just beginning to get acquainted, the music started to play, and we were just trying to figure out the dance moves of these young black kids from D.C.

We weren’t more than an hour into this party when someone switched on a black and white TV to the shocking news that Martin Luther King Jr., who was in Memphis for the sanitation workers’ strike, was fatally shot on the balcony of the Lorraine Motel.

The adults in the room were clearly devastated by the news, but attempted to proceed with one of the saddest parties I’ve ever attended. Only slightly later, when news of rioting broke out in the neighborhoods surrounding the National Mall was the party canceled. Everyone went home. We to our safe hotel rooms and the black kids back to those neighborhoods.

All night long the sounds of sirens, gunshots and alarms went off; the National Guard was called out to protect the capital and we got very little sleep.  We were on lockdown and told not to go outside.  In the morning, I got up early and slipped out to see for myself.  And, there in the early dawn with smoke rising from the fires and the smell of smoke in the air, I saw the soldiers set up on the steps of the Supreme Court and Congress with concertina wire, machine guns and armored vehicles.  It was a spectacle that I captured on my Kodak camera.

Over the next week, riots in more than 100 cities nationwide would leave 39 people dead, more than 2,600 injured and 21,000 arrested according to a report on Smithsonian.com. I don’t believe we actually got to see inside the capital on that trip but I  remember thinking that if my father really wanted me to see how our government worked this was a prime example and he got more than his money’s worth!

The Assassination of Hope

Back in Los Angeles, the primary presidential campaign heating up between senators Eugene McCarthy, Robert Kennedy and Vice-President Hubert Humphrey on the democratic side, the issue was the war in Vietnam with former Vice-President Richard Nixon on the Republican side. McCarthy was clearly the Bernie Sanders kind of candidate and the one I would have voted for if I could vote.

But on June 4,  Bobby Kennedy won the California primary. After a short acceptance speech at the Ambassador Hotel in Los Angeles, he was assassinated. Sirhan B. Sirhan, a man of Palestinian descent, was captured at the scene and remains in prison to this day.

The nation was once again in mourning for another Kennedy, some say a visionary, who is often quoted, “There are those  that look at things the way they are, and ask why? I dream of things that never were, and ask why not?” And this, along with his pledge to end the war, to bring an end to racial injustice and to lead with courage made him a martyr to a generation.

On Aug. 5 through Aug. 8, Richard Nixon was nominated at the Miami Beach, Florida Republican convention to run for president. It came as a shock since his loss against John F. Kennedy in 1960, and subsequent loss in his run for governor of California a few years later against the current Gov. Jerry Brown’s father Pat; Democrats clearly underestimated him.  Helen Gahagan Douglass coined the name “Tricky Dick” during their 1950 senate race. It came into common use later, but he was no favorite of the press nor my family.  Only later when the Watergate scandal exploded in Congress did everyone seem to understand his treachery and the true meaning of his nickname.

Still the Democrats were divided, the war was divisive and it was nowhere more evident than at the their convention at the end of August 1968.  At the Democratic National Convention in Chicago, police and Illinois National Guardsmen went on a rampage, clubbing and tear-gassing hundreds of antiwar demonstrators, news reporters and even bystanders, with much of the violence broadcast on live national TV. The next day, Vice President Hubert Humphrey, perceived as the heir of Johnson’s war policies, wins the Democratic nomination, mostly through delegates controlled by party bosses.

And Hey Jude, the first Beatles single issued on their Apple label, is released in the U.S. It becomes the longest song to hit No. 1 on Billboard’s Hot 100.  In fact most of the rock music now known as “classic” comes from this time inspired by the events of the time, like Street Fighting Man or Jumpin’ Jack Flash by the Rolling Stones or Say it Loud —I’m Black and I’m Proud by James Brown.  All promoted on FM radio that wasn’t completely corporate owned back then. DJ’s actually chose the music they played.

The secret plan to end the war: Treason or conspiracy theory

The issue of the time and the campaigns was still the Vietnam War and racism. Nixon came on strong with a message that only he  “had a secret plan to end the war.” Actually, “secret plan” wasn’t Nixon’s term; a reporter on deadline used it as he covered Nixon’s speech promising quick victory in that vastly unpopular war. Fifteen years later, in The Price of Power: Kissinger in the Nixon White House, Seymour Hersh revealed that Nixon, “alerted by Kissinger to the impending success of the peace talks,” had engaged in secret negotiations with South Vietnam to prolong the war until after the 1968 election. And Nixon actually escalated the war by bombing Cambodia after his election, causing more demonstration at home, more American casualties with a reaction of hundreds of thousands of students shutting down colleges nationwide.

An article in Common Dreams by Bob Fitrakis and Harvey Wasserman reported, none other than right-wing columnist George Will revealed that Nixon actually violated the Logan Act.

“Nixon’s newly revealed records show for certain that in 1968, as a presidential candidate, he ordered Anna Chennault, his liaison to the South Vietnam government, to persuade them to refuse a cease-fire being brokered by President Lyndon Johnson. Nixon’s interference with these negotiations violated President John Adams’s 1797 Logan Act, banning private citizens from intruding into official government negotiations with a foreign nation.”

Since this time it has been revealed that President Lyndon Johnson also knew of this treason, had the evidence of it and called it that but said nothing publicly.  This might have only been a footnote in the history of 1968 and the Vietnam War, except that 12 years later in the Carter vs. Reagan election the same type of Logan Act violation took place in the “October Surprise,” a long-neglected precursor of the more famous Iran-Contra scandal. And oddly enough this is what now will probably be proved in the allegation against Russian collusion to support Donald Trump’s presidential campaign.

It seems abundantly clear at this point that the past is precedent for the future and that the sins of our forefathers are once again being visited upon us.  Democracy, our republic, and what it stands for or against are still being contested in much the same way it was in 1968. It is perhaps only now with the perspective of the last 50 years, the history of deceits and our continued involvement in wars for questionable gain — Vietnam, Iraq, Afghanistan and now Yemen, that any of us can understand the long shadow that is still being cast by this era and its influence on our nation today.

We are still living with the results of bringing those wars coming home, especially the ghosts of Vietnam.

And to some extent why an independent press is necessary and vital.