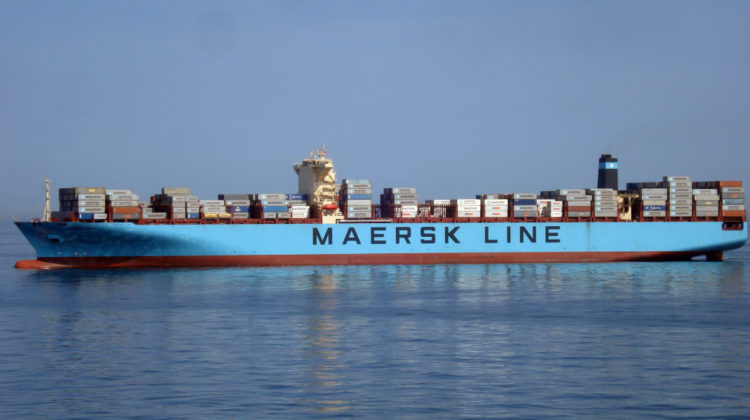 Maersk, the world’s largest shipping company, last week announced a target date of 2050 for completely ending its use of fossil fuels, which would significantly cut other harmful pollutants, too. The official environmental goal is a net zero CO2 emission, which drew praise from local activists, regulators, and ports, but also a continued diversity of perspectives on the future.

“To achieve this goal, carbon neutral vessels must be commercially viable by 2030, and an acceleration in new innovations and adoption of new technology is required,” Maersk said in a Dec. 4 press release.

Maersk highlighted its leadership in reducing CO2 to date, but went on to say that with growing trade, continued efficiency improvements were simply insufficient.

“The only possible way to achieve the so-much-needed decarbonisation in our industry is by fully transforming to new carbon neutral fuels and supply chains,” said Maersk Chief Operating Officer Søren Toft. “The next 5-10 years are going to be crucial,” he said, in light of the scale of transformation needed.

“Given the 20- 25-year life time of a vessel, it is now time to join forces and start developing the new type of vessels that will be crossing the seas in 2050,” Maersk said.

“To reach the target by 2050, in the next 10 years we need some big breakthroughs,” Toft told the Financial Times. “We will have to abandon fossil fuels. We will have to find a different type of fuel or a different way to power our assets.”

“As usual, Maersk is in the lead in the push for cleaner fuels,” David Pettit, Senior Attorney with the Natural Resources Defense Council, told Random Lengths. “I think that Maersk sees the changes ahead and would like to be a part of the solution rather than have something imposed on the company from above.” But, Pettit warned, “Maersk, despite its size, can’t make this change happen on its own.  There needs to be industry-wide commitment to the fight.”

“We can all be grateful for Maersk leading a call to action, as the shipping group did with lower sulfur fuel over ten years ago,” said Richard Havenick, a leading advocate for low sulfur fuels from the Coastal San Pedro Neighborhood Council at that time, prior to the ports’ first Clean Air Action Plan. The port had repeatedly rebuffed such calls as unrealistic and impractical, when Maersk’s announcement abandoning high-sulfur bunker fuel took the whole industry by surprise. World-wide low-sulfur regulation through the International Maritime Organization (IMO) does not go into effect until 2020.

“Current advancements tell me, however, we must expect Maersk, industry, and regulators to set goals higher,” Havenick said, citing rapid advances in battery and electric generation technologies that are decarbonizing the power grid faster than had been thought possible.

“It is good news that Maersk has taken this step, even if its implementation is delayed,” said Peter Warren, another long-time Coastal San Pedro activist, who’s also a board member of the San Pedro & Peninsula Homeowners Coalition.

“We are really thrilled to hear about Maersk’s announcement of carbon neutrality,” said Lisa Wunder, the Port of LA’s Marine Environmental Manager. “It really lines up with some of the programs here, specifically regarding our 2017 update to our Clean Air Action Plan, where we for the first time introduced greenhouse gas reduction goals.”

Despite significant past reductions, “Ships still remain the largest source of pollution at the Port of Los Angeles,” Wunder said.

“We applaud Maersk’s effort to achieve carbon neutrality by 2050. Emissions from shipping contribute significantly to climate and other forms of air pollution, and technologies that are net zero for CO2 will also help clean up harmful levels of smog and particulates,” the South Coast Air Quality Management District said. “While we need to reduce emissions in our area much faster to meet federal air quality standards, efforts like this will help.”

AQMD held a technology forum on ocean-going vessels (OGV) on Dec. 5. OGVs contribute 14 percent of NOx emissions; they were the third-largest contributor in 2012, but will be the top contributor by 2023, with a slight increase in emission levels. In sharp contrast, the top two — heavy-duty trucks and off-road equipment — will see steep declines, as will passenger cars and light-duty trucks, whose emission levels only narrowly trailed OGVs in 2012, but will plummet by well more than 50 percent by 2023.

“Over the last four years, we have invested around USD 1bn and engaged 50- plus engineers each year in developing and deploying energy efficient solutions,” Toft said. “Going forward we cannot do this alone.”

POLA has had some involvement with Maersk’s efforts already, through its Technology Advancement Program.

“They are investing over $125 million on energy efficiency improvements for ships,” Wunder said.

“They’re taking 12 of their ships and then making various improvements, changing the bows, the propellers, raising the bridge, doing other things to improve efficiency on their ships,” Wunder explained. “The portion we’re funding on this project is actually the data collection, so when the project is completed we’ll have a before and after to see actually how much greenhouse gas emission reduction is found through this program.”

Results are expected within the next two months.

“Despite what some may or may not think, the ports of LA and Long Beach have been environmental leaders over the last decade,” POLA spokesman Phillip Sanfield said, pointing to the Clean Air Action Plan and Clean Trucks Program as models that other ports have followed.

“It takes leadership, and we’ve done that, and we’re seeing Maersk doing this now on the shipping line front, so we’re really pleased about it,” Sanfield said.

But this representation — though true in part — misstates the causal order of things. Maersk’s leadership dates back at least to the abandonment of bunker fuels in the early 2000s, well before the first Clean Air Action Plan, when POLA was still fiercely resisting community calls for the port to curb bunker fuels.

“The Port of LA continues to externalize costs onto the community. Rather than treating the community as customers, the port treats us as a problem,” Warren told Random Lengths News. “We are, in fact, the biggest customer of the port in terms of the dollar value of the health effects, lost wages, sick days, and other health care impacts that we absorb daily, year in and year out,” he said. “The port has made an ugly decision to put those costs on the community, including children, seniors, and the disabled who can bear it the least, as well as relatively healthy adults.”

Numerous studies bear this out, both directly and indirectly. For example, as noted at AQMD’s forum last week, its 2016 Air Quality Management Plan is projected to prevent 1,600 premature deaths per year, with cumulative public-health benefits estimated at $173 billion from 2017 to 2031.

While AQMD includes such costs in its socio-economic analyses, they are far from being reflected in the marketplace. As far as global warming costs are concerned, activist-led divestment campaigns are the most noted way of beginning to remedy that deadly accounting failure.

Ambient air pollution currently results in several million premature deaths worldwide, while global warming impacts from heatwaves and other extreme weather events will far surpass that in years ahead. A recent report in The Lancet, Britain’s leading medical journal, found that 157 million more vulnerable people worldwide were subjected to a heatwave in 2017 than in 2000, and that 153 billion hours of work were lost in 2017 due to extreme heat as a result of climate change.

All sectors contribute to this, but transportation disproportionately contributes to both global warming and air-pollution mortality and morbidity. And shipping plays an outsized role in local impacts, as AQMD’s recent forum highlighted.

“Getting other shippers to join in will be critical,” Pettit stressed. Ports and regulatory bodies have crucial roles to play as well.

“Ports would probably need to upgrade their electric infrastructures to be able to charge batteries on oceangoing vessels,” he said. “I think that IMO is interested in electrification although there will always be some foot-dragging by some members.”

“In addition to IMO advocacy, the coastal states may be interested in fuel requirements within their waters,” Pettit went on to say. “I would expect NEPA and CEQA to be useful tools here also, although the issue of feasibility will of course be prominent.”

Along with praising Maersk, AQMD said, “We also fully agree with the need for broad collaboration and investment in research to develop cleaner technologies, and that must start today in order to meet this ambitious goal.”

“Of all freight transport, ships uniquely traverse vast expanses of potential energy sources, whether solar, wind, hydrogen, or other elements abundant at sea,” Havenick pointed out.

“We should reasonably expect Maersk and others to require carbon-free ships by 2025 with implementation by 2035 or sooner,” he said. “It’s beginning to look like the fossil fuel group is holding onto the flat earth while zero emission technology advancements reveal with increasing speed that the earth is round!  That’s the real world and it’s here now!”