Through Music and Language, A ... 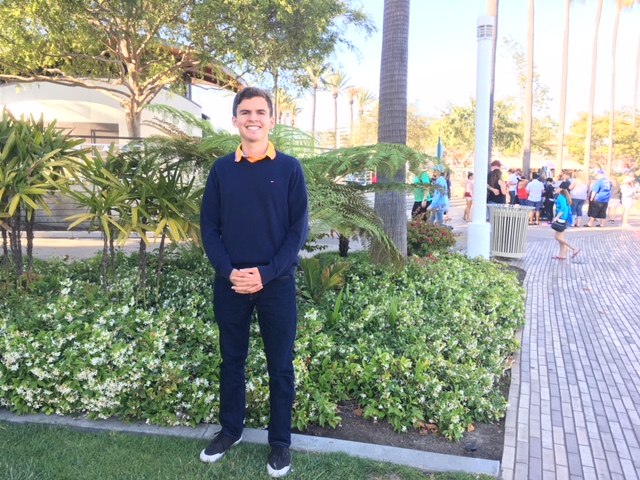 Through Music and Language, A Wilson Student Grasps Keys to Success

Both students excelled in school through certain challenges. Jairo came through escaping a violent country and Tess managed through a serious illness. Ultimately, both stood out because of their own resolution and strong support from both home and school. Tess and Jairo both possess the common traits of strength and compassion, both of which are the key to what drives these two young adults. First, a look at Jairo’s story. Tess’s story will follow in an upcoming edition.

RLN sat with Jairo’s stepfather, Daniel Farina. Jairo was born in San Pedro Sula–one of the world’s most dangerous cities–in Honduras, ranked one of the poorest countries in the Americas, in 1999. He escaped with his mother and sister at age nine and found asylum in Austria. That connection was from Jairo’s Austrian great grandfather, which allowed the young boy’s family to apply for citizenship. They have dual citizenship in Honduras and Austria.

Aside from the bitter cold, a shock from Honduran average temperatures of 80 degrees, Austria brought a positive change for Jairo. Within three months he learned enough German to participate in the school chorus during Christmas. He was also accepted into the most sought-after middle school in the city: Gratz International Bilingual School. Jairo spent four years there learning all of his subjects in German and English. Even with these good experiences, Farina said the move affected Jairo. In Honduras Jairo had a “nice and accommodating life.” It was much harder for him in Austria.

“For instance, in Austria the government helps you but they request two things, that you speak German and work,” Farina said. “They also help you find jobs. His mom started working but Jairo had to go to school by himself on public transportation. Every kid does that but he had never done that before.”

In 2014, Jairo relocated to Long Beach with his family. Since then he has steadily excelled in his work both in and out of school. He took 15 advanced placement courses and his weighted GPA is more than 4.0 (A weighted GPA is calculated by awarding additional points to classes that are considered more challenging than the basic curriculum). Jairo also participated all four years in cross-country and track, becoming one of the captains during his senior year. He still goes every morning to Signal Hill to run. One of his goals is to join the cross-country team in college. He was accepted with a full four-year scholarship to Bowdoin College in Maine. Jairo will be the first college graduate of his family and after that he expects to pursue a double master’s degree in Germany.

But when Jairo first enrolled at Wilson High he had to take an art subject. He signed up for guitar class.

“He never played any instrument before or read music,” Farina said. “Today, according to his teacher, he is not just a technical player, he is a performer.”

Jairo communicates through music. He feels music can improve communication between people, Farina explained. His music teacher said that Jairo inspires his other classmates.

“He always challenges himself to a higher level,” Farina said. “His teacher said the last piece that Jairo played for him was an adaptation of Mozart’s, The Magic Flute. When I asked his teacher if he liked Jairo’s playing. He replied, ‘Yes, and I will never hear that again from one of my students.’”

He completely transitioned to playing classical music. He loves Bach and began playing difficult pieces. Jairo kept challenging himself further and progressing with classical pieces. He also plays guitar regularly in some of the local nursing homes.

But there is more than music to Jairo’s daily activities. He volunteers in the Long Beach marathons and has participated in the Long Beach Youth Leadership Program, mentoring younger students in middle school.

Jairo is multilingual in German, Spanish, and English. He has a certificate from the German Government stating that he speaks at a college level in German, and he has the option to apply at the University of Berlin where they offer a dual master’s degree.  He hopes that Harvard will recruit him, as he would like to major in business there. Bowdoin College is one of the junior Ivy League schools that Harvard recruits from. His major at Bowdoin is still undeclared, but he has an interest in and love for psychology.

What drives Jairo’s motivation? Farina said it is Jairo’s desire to always improve himself.

“It’s the same with his running,” Farina said. “Every time he runs, he tries to better his last time. And academically, his mother instilled it in him to challenge himself by taking the harder courses.”

In one of Jairo’s major achievements, he got an ovation at his school awards night for taking 15 AP classes; most students take up to eight. Jairo passed them all with fours and fives.  On his SAT he made 1600 points, which earned him a B grade. Farina asked him, “Are you B guy?” Jairo said “No,” took the SAT again, and earned more than 1600 points.

Farina and Jairo’s mother, Karen, instilled in Jairo the belief that a person must have a balance between mind, soul, and body. He developed that balance with academic excellence, superb music skills, and a healthy physique. And in this last year Farina saw a moment when that door opened for Jairo. When Jairo went to visit Farina’s stepfather in a nursing home, he brought his guitar to play for him. When he saw how happy it made Farina’s stepfather and everyone else, Jairo said that he wanted to keep going back to play for them at least every month.

“When he goes there to play he gives up having his own Sunday,” Farina said. “He said, ‘I have a gift and it’s good to share it with people who enjoy it.’ He wanted specially to play The Magic Flute for my stepfather.”

From escaping violence and finding asylum to acclimating, essentially, to a new world, twice, Jairo found his muse in music and language. Through these expressions, he has harnessed his path toward higher education.