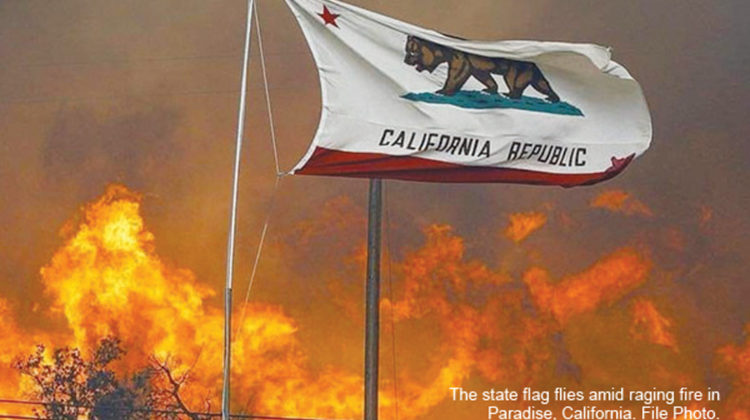 Working people in Paradise, Magalia and other California towns were hit by one of the worst wildfires in state history in November. The Camp Fire burned over 150,000 acres in Butte County beginning Nov. 8. As this issue of Random Lengths News goes to press there are 77 confirmed fatalities while 12,000 structures, mostly houses, have been destroyed.

At the same time, the Woolsey Fire in Los Angeles and Ventura counties burned 96,949 acres. There are three confirmed fatalities and 1,472 structures were destroyed.

These results  constitute a social catastrophe. But the disaster isn’t the result of the fires; it was caused by the workings of an economic system that puts the profits of capitalist builders, investors, utility company executives and insurance magnates before the lives of working people. The murderous toll could have been largely prevented.

Hundreds are still missing and unaccounted for. Most people in Paradise received no warning that the fire was roaring into the town. The alert system was voluntary, and less than half the residents were on the list. Those who tried to flee found roads blocked by fire, debris and the sheer number of people attempting to escape. Some burned to death in their cars.

By contrast, everyone with a cellphone in the wealthy town of Malibu got an Amber Alert message warning of the fire danger there.

Workers from the area pooled resources and bought tents and bedding to provide shelter for the refugees. Most arrived with little more than the clothes on their backs. Volunteers organized free food and clothing distribution booths. There was even a table with food for pets.

An ad hoc group of students from Chico State University got together and brought sandwiches to the tent city. Under pressure to help, Walmart provided portable toilets and water bottles.

The six overcrowded government-run shelters in the area became centers of an epidemic, the highly contagious Norovirus, shaken by vomiting and diarrhea. Dozens were hospitalized.

Denise Chester, a housewife with three children, a construction worker husband, told reporters she got no alert. “At first I grabbed a water hose and tried to save my house and the two houses close to it.” Fortunately, she got her children and their dog, and joined other residents to fight their way out of town. “We organized a caravan of 10 people,” Chester said. “I knew a back way out and we took it. We went on dirt roads, but we survived. My house was completely burned to the ground.”

Fred and Sally Hugg’s farm in Concow survived when they were able to beat back the fire. They organized to gather and take in some 200 animals from people who had to flee, including 100 chickens, 60 ducks, 20 goats, three pigs and four donkeys. They’ve gotten help from other volunteers and members of the Future Farmers of America.

Almost all of those involved in the largest search effort in California history — trying to find survivors or human remains in Butte Country — are volunteers.

More than 1,000 of those fighting the fires have been California prison inmates who volunteered for the dangerous duty. Two prisoners are among the five firefighters severely burned in Paradise on the first day of the fire. Inmates are paid just $2 a day, with an extra $1 for each hour when they battle an active fire.

The contributions of working people, the solidarity they demonstrated and the collective aid they provided, is a powerful example of the potential of consolidated effort that is available to apply to any number of problems.

“They claim that the Federal Emergency Management Agency has set up shop in Chico to help us,” said a victim of one of the wildfires. “I called their office and they told me that it would take 10 days just to get an application. We have friends in Redding where we could stay but we have no gas and no money to get there. I contacted the Red Cross and asked them for $40. They said they couldn’t help.”

The Pacific Gas and Electric Company in Northern California has been heavily criticized. Fire investigators found that PG&E’s refusal to spend money to upgrade their infrastructure has been responsible for some of California’s worst fires in the last three years.

Conditions on Nov. 8 warranted a pre-emptive power shutdown, but PG&E bosses decided not to order one. Then they reported they had a problem on one of their high-voltage power lines near Paradise. Fifteen minutes later, the Camp Fire broke out in that area. Authorities say this is most likely the cause of the fire.

Places like Paradise are in what is called wildland-urban interface. Housing is built near forests and associated brush and grasslands. Fully one-third of all housing in the U.S. is built in this kind of area.

The steps necessary to minimize fire danger are no mystery: clearing the ground of debris and dead plants; removing fallen trees; conducting periodic controlled burns; not stringing electric wires near dense forests, and instead putting them underground; and using fire-retardant materials in construction. But under capitalism, builders, utilities and governments deem these steps too expensive. PG&E finds it more profitable to pay the fines than to take preventive measures to stop or retard fires.

In addition, the impact of climate change, droughts, proliferation of dead trees due to bark beetle infestation all contribute to the California tinderbox.