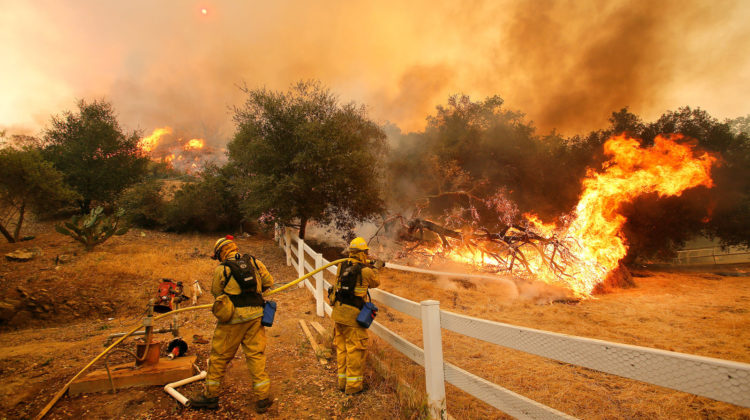 Two months after Hurricane Florence hit the Carolina coast with record rainfall, and one month after Hurricane Michael hit the Florida Panhandle as the third-most intense hurricane in U.S. history, a string of wildfires across California revealed another facet of how global warming is already threatening and destroying whole communities via extreme weather events and their consequences.

The Woolsey Fire, which burned almost 100,000 acres in Los Angeles and Ventura Counties, was overshadowed by the Camp Fire, which destroyed the town of Paradise on Nov. 6, leaving 85 confirmed dead, so far, and hundreds still missing. But the future holds much worse, according to a paper published two weeks later in Nature Climate Change, which warned that by the end of this century some places could face as many as six climate-related crises at the same time.

Florida and California are already getting a taste of that, according to the paper’s lead author, Camilo Mora of the University of Hawaii. In addition to Hurricane Michael, Florida recently experienced extreme drought, record high temperatures and wildfires, while California has experienced drought, extreme heat waves and degraded air quality in addition to its wildfires. The paper “found traceable evidence for 467 pathways by which human health, water, food, economy, infrastructure and security have been recently impacted by climate hazards,” and went on to warn that “GHG [Greenhouse Gas] emissions pose a broad threat to humanity by intensifying multiple hazards to which humanity is vulnerable.”

The insurance industry has long recognized the threat. “We’re not in a crisis yet, but all of the trends are in a bad direction,” California’s outgoing insurance commissioner, Dave Jones, told the New York Times. “We’re slowly marching toward a world that’s uninsurable.” Industry insiders agree. The Australian Financial Review ran a story headlined, “Climate change on track to make world ‘uninsurable’: IAG” (IAG is Australia’s insurance giant).

Of course, Donald Trump waved away all such concerns.

“There is no reason for these massive, deadly and costly forest fires in California except that forest management is so poor,” Trump tweeted on Nov. 10. “Billions of dollars are given each year, with so many lives lost, all because of gross mismanagement of the forests. Remedy now, or no more Fed payments!”

Trump’s infantile tirade drew sharp rebukes from firefighters, scientists and others. California Professional Firefighters President Brian Rice called Trump’s blame-laying “dangerously wrong” in a written statement. “Wildfires are sparked and spread not only in forested areas but in populated areas and open fields fueled by parched vegetation, high winds, low humidity and geography,” Rice explained. “Moreover, nearly 60 percent of California forests are under federal management, and another one-third under private control. It is the federal government that has chosen to divert resources away from forest management, not California.”

The slowing jet stream was also responsible for prolonged cold on the East Coast, which Trump ignorantly cited over the Thanksgiving holiday as disproving global warming. “Brutal and Extended Cold Blast could shatter ALL RECORDS — Whatever happened to Global Warming?” he tweeted, drawing an avalanche of public ridicule.

But the sharpest rebuke came from his own administration via a congressionally-mandated report — the National Climate Assessment —which he tried to bury by releasing it on Black Friday. The report is a joint product of scientists from 13 government agencies, including NASA, NOAA and the Department of Defense. In a worst-case scenario, the report warned, climate change could cut 10 percent from the nation’s GDP by 2100, while aggressive preventative policies, which Trump has been fighting against—could cut those costs substantially.

“Global action to significantly cut greenhouse gas emissions can substantially reduce cli­mate-related risks and increase opportunities,” the report states. But failure to act carries widespread bottom-up threats: “Without adaptation, climate change will continue to de­grade infrastructure performance over the rest of the century, with the potential for cascading im­pacts that threaten our economy, national security, essential services, and health and well-being.”

Below that top-line figure is a wealth of devastating detail, including specific regional analyses. “Exposure to hotter temperatures and heat waves already leads to heat-associated deaths in Arizona and California,” the report notes in its section devoted to the Southwest. “Analyses estimated that the area burned by wildfire across the western United States from 1984 to 2015 was twice what would have burned had climate change not occurred. Wildfires around Los Angeles from 1990 to 2009 caused $3.1 billion in damages.” In addition, “Tree death in mid-elevation conifer forests doubled from 1955 to 2007 due, in part, to climate change.”

Sea level rise is also already a problem. “At the Golden Gate Bridge in San Francisco, sea level rose 9 inches (22 cm) between 1854 and 2016. Climate change caused most of this rise by melting of land ice and thermal expansion of ocean water,” the report notes.

In short, the report’s message is that climate change already impacts us in myriad different ways. It’s not just the extreme events like hurricanes Florence and Harvey, or wildfires that now threaten us well after Halloween, and those impacts will only grow more severe over time.

Perhaps the most hopeful sign of response is a proposal for a Green New Deal from the youngest woman ever elected to the House of Representatives, New York’s Alexandria Ocasio-Cortez. She suggests establishing a select committee to draft legislation for a sweeping transformation of the American economy on a scale similar to the original New Deal, with these specific 10-year goals:

(3)   Upgrading every residen-tial and industrial building for state-of-the-art energy efficiency, comfort and safety;

(4) Decarbonizing manu-facturing, agricultural and other industries;

(5) Decarbonizing the repair and improvement of transportation and other infrastructure;

(6) Funding massive investment in the drawdown and capture of greenhouse gases;

(7) Making “green” technology, industry, expertise, products and services a major export of the United States, with the aim of becoming the undisputed international leader in helping other countries transition to completely carbon neutral economies and bringing about a global Green New Deal.

The basic idea had 70 percent support in a 2015 poll. Ocasio-Cortez’s plan is similar to one developed by Data for Progress prior to the midterm elections.

“Green New Deal combines two things voters love: the environment and jobs,” Data for Progress co-founder Sean McElwee said. “Pundits are trapped in a framework in which the environment is pitted against jobs, which is silly.”

We’ve been stuck in silly far too long. Time is running out. No one knows where or when the next wildfire, the next heatwave, or other climate disaster will strike. We only know that it won’t be the last.