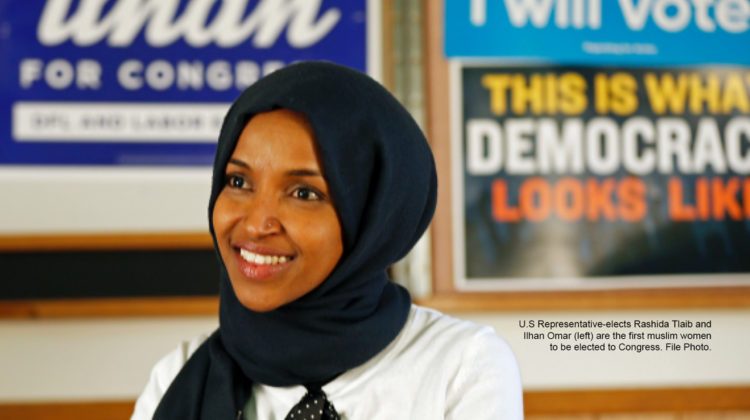 Democrats won an election wave of historic proportions on Nov. 6 — with their largest gains in the House of Representatives since Watergate and the most diverse freshman class ever—amidst a fog of denialism that initially flooded the pundit class. But the Democrats’ recapture of the House was assured even before polls closed in California, where 15-term GOP conspiracy theorist Dana Rohrabacher was eventually defeated (see “Blue Wave Hits Orange County—Hard,” p 10). Recapturing the House signaled the end to congressional collusion with Trump’s attacks on American democracy — at least on the House side—as well as the potential to advance a popular progressive agenda: raising the federal minimum wage to $15, strengthening the Affordable Care Act, passing a massive public infrastructure bill, granting legal status to immigrant children known as “dreamers” and reauthorizing the Voting Rights Act.

This was all backed up by sweeping state-level victories, a flurry of progressive initiatives and historic levels of voter participation driven by waves of newly-engaged activists. Three compelling high-level progressive candidates who appeared to fall short—Beto O’Rourke, Stacey Abrams and Andrew Gillum—nonetheless showed that it wasn’t necessary to run defensively as GOP-lite candidates in traditionally conservative states, and did tremendous party-building work for the future.

“Turnout is crucial, and progressive candidates often propelled it,” progressive activist and author Norman Solomon told Random Lengths News. “Even when dynamic statewide campaigns didn’t win — as in races for governor in Georgia and Florida or for U.S. Senate in Texas — grassroots momentum brought in voters who arguably tipped the balance in numerous down-ballot races.

“Some Democrats who’ll become members of the House in early January can thank Stacey Abrams, Andrew Gillum and Beto O’Rourke for generating the enthusiasm and turnout that made it possible.”

At the state level, Democrats won sweeping victories, flipping eight governorships, six state legislative chambers, and more than 300 state House and Senate seats. They gained unified control of the governor’s office and legislature in eight states, more than doubling their previous total of just six.  In addition to changing the direction of state-level governance, this bodes well as a first step toward preventing a repeat of the systemic gerrymandering Republicans pulled off after the 2010 census. Democrats also won a majority of attorneys general seats. And similar gains trickled down to the local level. For example, 65 percent of candidates endorsed by the Democratic Party of Orange County won, according to DPOC spokesperson Rachel Potucek.

But behind it all was a tremendous increase in voter participation, hitting a 104-year high in midterm turnout, with near presidential-year levels in most places. Youth turnout was up more than 50 percent from 2014, though still well below average at 31 percent. And that, in turn, was partly driven by an enormous increase in activism.  Swing Left, a group which focused on the flipping the House, mobilized 150,000 volunteers (either doing voter contact or fundraising), 40 percent of whom had never been involved in a campaign before.

“This election was a historic breakthrough for progressives even before the results,” Solomon said. “With growing intensity over the last two years — while Republicans consolidated their power at the top of the U.S. government — wide sectors of the left set aside timeworn theoretical arguments to mobilize behind the political imperative of halting right-wing momentum with votes.”

“Taking back the House is a testament to the unprecedented power of the grassroots effort led by the thousands of volunteers who channeled their energy into meaningful action,” Swing Left co-founder Ethan Todras Whitehill said.

“In response to Trump and the Republican agenda, progressives did more than just protest and march, they also spent the last two years organizing and volunteering to get out the vote in critical swing districts. That is how we won,” he said.

“There were people all over Chicago looking for this kind of  way to make a difference,” said Connie Meyer, a co-leader of Northside Chicago Swing Left, which formed in February 2017 and helped unseat six-term representative Peter Roskam, who’d never gotten less than 59 percent defending his suburban seat.

Barbara Kent was a Swing Left co-leader in NY 11, covering Staten Island and parts of Brooklyn. Staten Island had only had one Democratic representative she could remember. When Swing Left considered adding the district to its list, “I told them it would be (the) hardest race to win, but it could be done,” she said. She was right. It was the first “Rep favored” seat to go blue on the New York Time’s House Election List of 80 races.

But it doesn’t take a megalopolis. In Kansas 3, where Sharice Davids won, Alan Sunkel and his wife read about Swing Left in the New Yorker in January 2017, and helped start the group there.

“We had a pretty committed group of volunteers here who formed the steering committee,” he said. Plus, they had support from outside the district, just across the river in Missouri.

Because it had been theoretically possible for Democrats to win as many as 50 seats or more, many pundits initially downplayed the accomplishment in the House, or strangely echoed Donald Trump’s bizarre morning-after press conference claim that, “To be honest — I’ll be honest, I thought it was a — I thought it was a very close to complete victory [for Republicans].”

Meanwhile, back in the real world, voters passed a number of initiatives that underscored how significantly pragmatic bipartisan support equates with so-called “hard left” policy ideas that progressives have been pushing for years, if not decades.

On voting-rights, Florida passed the historic Amendment 4, restoring the voting rights of convicted felons who have completed the full terms of their sentences. A whopping 1.4 million Floridians had their voting rights restored. Nevada and Michigan passed automatic voter registration laws, bringing the total to 15 states, plus Washington, D.C., Maryland and Michigan both passed same-day registration. And the voters of Colorado, Michigan, Missouri, and Utah passed anti-gerrymandering initiatives, removing politicians from drawing their own districts.

“The Blue Wave didn’t save us; each and every volunteer did,” Whitehill said. “But there’s still so much more to do. This is just the beginning. We promise to keep working. We hope everyone else will, too.”

Prepping the World to Which Critical Media Literacy, #MeToo Could Lead