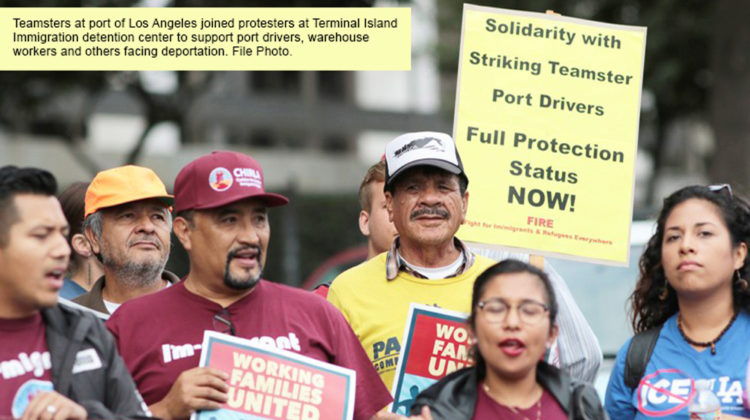 Teamsters, Painters speak out against deportations

The Trump administration was not deterred when its decision to terminate the Temporary Protected Status of people from four small nations was halted by an Oct. 2 injunction by a U.S. district judge. TPS beneficiaries from El Salvador, Haiti, Nicaragua and Sudan all have termination dates again. The status of the Sudanese TPS beneficiaries is scheduled to be terminated on Nov. 2, while the others are scheduled to terminate on Jan. 5, 2019 (Nicaragua), July 22, 2019 (Haiti), and Sept. 9, 2019 (El Salvador).

At the Port of Los Angeles on Oct. 3, more than 300 striking port truck drivers, warehouse workers, and their supporters combined their fight against XPO Logistics and NFI Industries with the fight against White House’s TPS termination.

TPS allows workers from El Salvador, Nicaragua, Haiti and the Sudan to live and work legally in the U.S. Many port drivers and warehouse workers will be disqualified from working and threatened with deportation if their TPS status is withdrawn.

“It’s very important that the demand about TPS was included,” Jose Rodriguez, a warehouse worker for Cal Cartage, which also employs many of the truckers, told the reporter Bill Arth.

The port workers who have TPS “face a terrible crisis, worrying about what will happen to their families if it is ended,” Rodriguez said. Cal Cartage was recently taken over by NFI.

“I hope all the unions will join in this cause,” Rodriguez said.

Rodriguez has been among those warehouse workers at Cal Cartage who have been fighting for years for higher wages, safer conditions and union representation.

Many of the workers are hired through a temp agency, he said, and they make even less. That morning, six big Teamster-driven rigs led workers in a protest outside the Metropolitan Detention Center in downtown Los Angeles, where many immigrants are held before deportation.

“We’re a little late and we were never at the front, but when the dynamics of our people changed we had to change with it,” Ron Herrera, vice president of the Western Region for the Teamsters, told BuzzFeed News. “We realized a majority of workers we’re trying to organize are TPS holders and immigrants. A lot of them were predominantly immigrant Hispanic.”

“People come to this country and they want to work and I’m not the immigration police,” Ken Rigmaiden, general president of the Painters union, told BuzzFeed. The union is open to anyone, regardless of where they were born and raised, he said, adding that it’s important unions stand up for members when it comes to TPS or Immigration and Customs Enforcement raids.

Members of other unions and immigrant rights groups took part. The construction industry employs the largest number of workers covered by TPS, and the International Union of Painters and Allied Trades backed the protest.

The port drivers are fighting to be classified as employees. The overwhelming majority of the hundreds of trucking companies that deploy 17,000 trucks at the ports of Los Angeles and Long Beach classify their drivers as independent contractors. As so-called contractors, federal labor law prohibits them from joining a union.

After the protest at the detention center, workers organized a car caravan and drove 20 miles to the waterfront for the rally. The day ended with a civil disobedience action blocking the busy intersection of the Harry Bridges entrance to the I-110 Freeway. Some 50 union supporters were arrested, in an arrangement set up beforehand with the police.