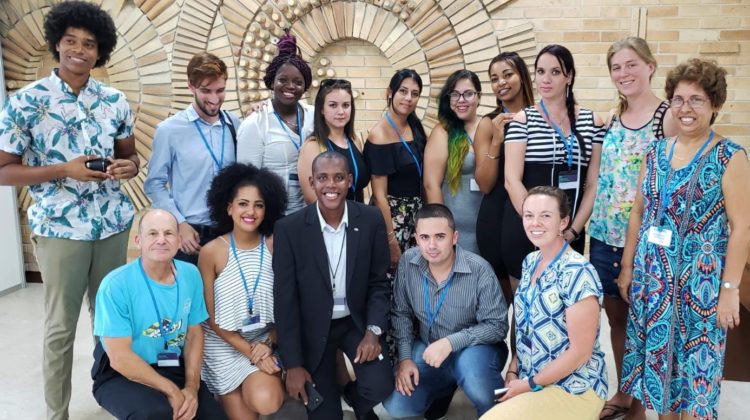 Six hundred and fifty delegates representing 18 countries gathered at MarCuba — an international marine science conference intended to expand collaboration between marine researchers, aquaria and universities in the United States and Cuba — in Havana this past month. Thirty-three Cuban institutions were represented with 270 delegates, researchers and students. Five-hundred-and-thirty-seven papers were presented at several hundred workshops.

Cuba’s deputy minister of the environment, José Luis Juanes Martí, opened the conference by discussing the progressive destruction of biodiversity worldwide and the particular vulnerability of countries like Cuba.

“We are being impacted by climate change and we need to reduce those impacts,” Marti said. “The reduction of biodiversity can also be answered with expanding genetic diversity and, of course, a fair and equitable distribution of wealth among nations … Adaptation and mitigation are only possible through sharing research and knowledge.  No single country or institution can succeed, but together we must respond to climate change.”

While there has been some collaboration, especially with Florida-based universities, this conference represented a dramatic increase, with more than 50 U.S. researchers in attendance and a delegation of 10 marine science teachers.  Meetings were held to further collaboration with delegations from Puerto Rico, Mexico, and the main environmental youth organization in Cuba.

Themes of the conference focused on human impacts in Cuba and internationally, including: overfishing, ocean acidification, global climate change and increasing extreme weather events, Marine conservation, biodiversity, biotechnology and food security, and development of nautical and recreational activities. Many workshops discussed the impact already in Cuba given global climate change caused by or accelerated by human activities.

Multiple researchers called for the end to the U.S. embargo of Cuba to foster marine investigations and environmental action. Even the conservative Miami Herald displayed a softening stance on the embargo in a story entitled, “U.S., Cuban Marine Biologist Put an End to Academic Embargo.”

“There are no borders that separate the water, reefs, and marine life off the coast of Cuba in Florida, and that’s why scientists in both countries said they need to get along and collaborate,” the story read.

The Bulletin of Marine Science, published by the University of Miami’s Rosenstiel School of Marine and Atmospheric Science, devoted a whole issue to U.S. and Cuban scientific investigations, many of them joint efforts through the National Oceanic and Atmospheric Administration or a U.S. university. Topics addressed in the Bulletin included investigations into the impact of overfishing, pollution, and climate change on the coral reefs off the coast of Cuba and Florida.

A marine science and special-needs teacher Sue Cullumber (also an alumni of the Teacher at Sea program), commented on her experience at the conference.

“Collaboration … is so important to the advancement of science and health of our [planet’s] oceans. [It] was incredible,” She said. “This just shows how important it is that we continue to work together to achieve these scientific breakthroughs.”

Anika Ballent, the education director of the plastic pollution environmental organization, Algalita, was ebullient about the conference.

“The people were so friendly and experts at reusing and recycling what they had. To me it was, in ways, a lifestyle I think many people in America who are leaning towards “zero waste” and a more sustainable lifestyle are striving for… We need to find a way to balance access to growth and sustainable resource management.”

The U.S. delegation was invited to return for Cuba’s environmental conference in July, 2019.