School is Where the Kids Are 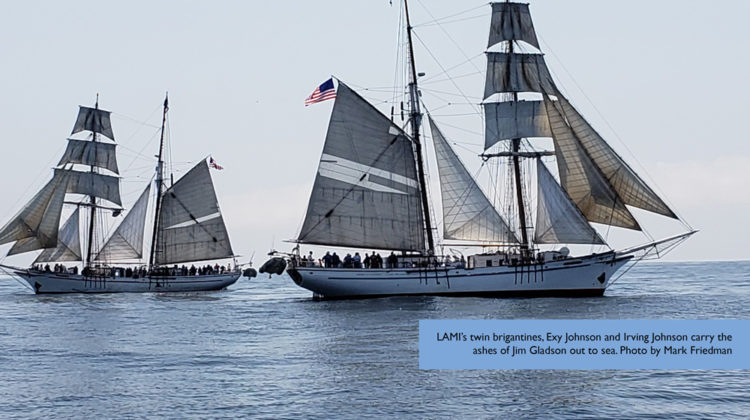 School is Where the Kids Are

The tall ships of the Los Angeles Maritime Institute, Exy Johnson and Irving Johnson, were in full sail and fully loaded as the ashes of LAMI founder Jim Gladson were distributed at sea, Aug. 12.

The cannons fired, carnations were thrown, and later, at the celebration of life memorial, more than 150 community residents, former students of Jim Gladson, family, Area D alternative school and long-time LAMI supporters honored his life and the traditions and mission that he developed to create the Los Angeles Maritime Institute and its tall ships. It was a fitting tribute to a man and his vision for giving hope and direction to young people.

The day began with the flotilla of LAMI’s twin brigantines, Irving Johnson and Exy Johnson, a small craft from the Cabrillo Beach Yacht Club and the City2Sea Streamliner heading out to sea from the San Pedro harbor.

The memorial meeting, chaired by Gladson’s son Richard, included at least 30 veteran sailors, volunteers, shipmates and former students who sailed with Gladson on his ships, including his sails up and down the Pacific Coast and to the Galapagos.  Speakers reminisced about the founding of the “alternative school” in 1973 to the most current successes of LAMI in taking out more than 6,000 youth in this past year on the tall ships for science and math engagement, leadership development and recreational activities.

He took students out on his ketch, the Dubloon and after retiring from the Los Angeles Unified School District, he started the Los Angeles Maritime Institute Topsail Youth program with a team of volunteers and former students.  In 2010, Gladson received Tall Ships America’s highest honor, the lifetime achievement award for “A Lifetime of Dedication to Sail Training.”

Under his motto “school is where the kids are” the Topsail program grew on Swift of Ipswich, then Bill of Rights and now, Irving Johnson and Exy Johnson. LAMI Director Bruce Heyman told the crowd that Gladson’s “strong passion and commitment to his vision brought us together … . This generation is honored to carry on the legacy, just think of the tens of thousands of youth whose lives were changed due to their experience on board our tall ship.”

In 1993, Gladson and volunteers began sailing the Swift of Ipswich.  LAMI then built and launched the twin brigantines, Exy Johnson and Irving Johnson, in the Port of Los Angeles under Gladson’s leadership.  The vessels were designated as the Official Tall Ships and Maritime Ambassadors of the City of Los Angeles.

Former teacher Elizabeth Neat, explained how Gladson taught responsibility to youth, that youth had to work out their own issues in student centered education and activities.

Gladson’s granddaughter, Sareta, explained how “he wanted you to do it yourself.  He wanted us to figure it out ourselves.”

In a special issue of Random Lengths News, Gladson and the institute were featured throughout. The cover photo is Gladson and youth with the headline Topsail Kids at the Helm … Youth Sailing Program Trains Children for Life.

Real science consists of personal investigations followed by two questions: what did you find out?  And what do you think about it?  Obviously the only way to get a wrong answer would be to lie.

In launching the twin brigantines, Irving Johnson and Exy Johnson on April 27, 2002, he wrote:

During the time we have been crafting these vessels another significant project has been just as busy.  There is a factory or an assemblyline somewhere in the region that is producing ‘at risk’ kids at a prodigious rate… There is one endangered species we cannot possibly afford to turn our backs on and that’s our next generation… These vessels are designed to being built as warships for the 21st century.  Our enemies are ignorance, fear and ineptitude; and above all, lack of confidence.  I thank you for your support.  But we still need your help to complete the ships to fit them out so that they can go forth and do battle with the conditions that produce so many kids whose personal visions do not yet include the expectation of a future with personal success.

LAMI urges the public to continue this legacy.  Visit  www.lamitopsail.org/activity/Jim-Gladson and consider supporting and volunteering to refurbish the Swift of Ipswich or be volunteer crew.

Piledrivers Local 2375 Is No More

Welcome to the Hotel California